DANGER to life warnings have been issued as Britain is set to be hit with nearly a foot of rain in the next three days.

The warnings are in place as the remnants of Hurricane Zeta continue to rage, bringing with it a heavy downpour.

From Thursday to Sunday, warnings have been issued for Wales and North West England.

The worst-affected areas are expected to get up to 250mm (10in) of rain between today and Halloween on Saturday.

The Met Office said homes and businesses could be flooded, while "fast flowing or deep flood water is possible, causing danger to life."

The Met Office forecaster Marco Petagna told PA Media: “On Friday a band of low pressure will start to sweep in from the north-west, and will affect areas from Cornwall to Northern Ireland.

"There is likely to be incredibly heavy wind and rain in these regions, with gales of 50-60mph in exposed areas, perhaps leading to waves of around 10-11 metres. Around 40mm of rain could fall each day in some parts.”

It comes as Londoners could be experiencing the wettest month for more than 150 years after the city had more than 139mm of rain up to 25 October, compared with the full month’s average of 78mm.

Heavy rain and 70mph winds are set to batter the UK this week, forecasters say.

Substantial rainfall will hit the country from today until the weekend, with up to 130mm of rain predicted in the Welsh mountains, and averages of 30-40mm for the rest of the UK.

Mr Page said: "Until the end of October we are looking at an unsettled spell of typical autumnal weather which will dominate the forecast.

"Every year we expect the remnants of decaying tropical hurricanes to disrupt conditions when they enter the North Atlantic.

“The remnants of former Hurricane Epsilon have been subsumed into another deep area of low pressure to the south-west of Iceland.

"The trailing weather fronts associated with this system will bring wind and rain to the UK, along with a potentially heavy swell."

Amid the wet weather conditions, Brits will be able to admire the next full Moon - the Blue Moon - on October 31.

Unfortunately, its name has nothing to do with its colour and the Moon should just look pearly grey. 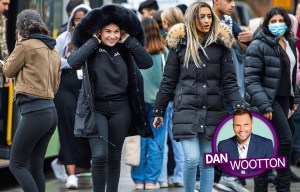 A Blue Moon refers to the very rare occasion when a full Moon appears for the second time in the same month.

Flick about 3:3 with Leipzig: Crazy game. It is important that Bayern did not lose
Dybala has not scored any points in this season's Serie A, he has played 6 matches
Giroud has 6 goals in his last 4 games. He has scored in his last 6 games in Chelsea's Premier League start
Solskjaer Pro 3:1 with West ham: Very happy with the game. Manchester United is getting more stable
Marcus Rashford: Manchester United will win more with more dry matches
Pirlo on 2:1 with Torino: after the break, we remembered that giving everything and sacrificing yourself is in the DNA of Juve
Juve have no defeats in the Serie A season: 5 wins, 5 draws
Source https://www.thesun.co.uk/news/13060978/hurricane-zeta-batters-britain/