In addition, Sunday could even bring hail and thunder as showers are set to continue. The BBC’s Ben Rich warned the weekend’s weather “may have an impact” on people’s plans.

He said Britons should be prepared for short bursts of “really intense” rainfall and heavy winds associated with a band of bad weather heading north-east.

Met Office meteorologist Luke Miall added: “As the cloud and rain pushes in from the west and these winds whip up - we’ll see gales around western coasts - it does mean those temperatures will start to rise.” 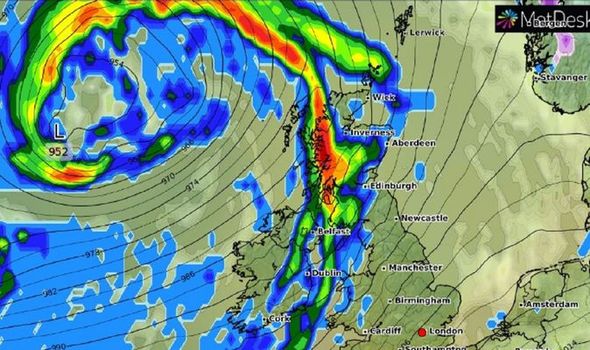 He said strong winds and gales are due to move northwards through the Irish Sea on Saturday morning.

These will hit western parts of Scotland and leave other western areas with a wet start to the day.

The band of wet and windy weather is due to move eastwards cross the country as the afternoon goes on. 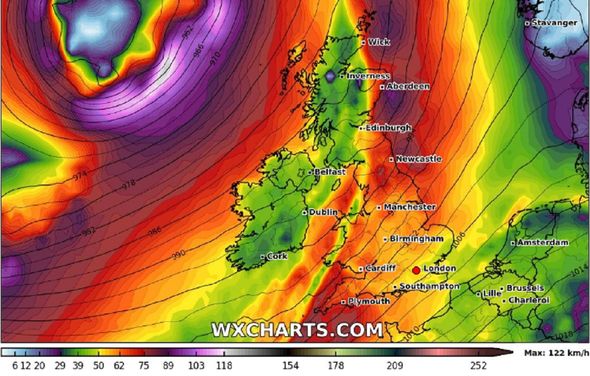 A band of high wind can be seen across the UK on Saturday morning (Image: WX Charts)

Mr Miall warned: “We are going to see a short, sharp burst of quite heavy rain amongst that – some really gusty winds as well.”

The far south-east of England, however, may remain largely dry.

By late afternoon south-eastern areas could see temperatures as high as 17 degrees Celsius. 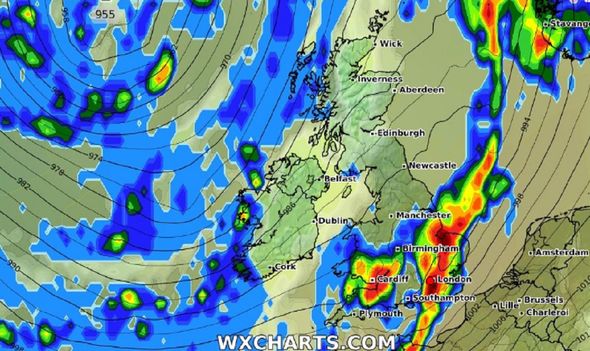 However, Met Office maps show northern areas and Scotland in particular are set to be colder – between 10 and 13 degrees.

While the south-east is set to remain dry during the day, the Met Office warned of a band of rain there throughout the evening.

For Sunday, the Met Office warned: “A mix of sunny intervals and showers, some of these heavy with possible hail or thunder. 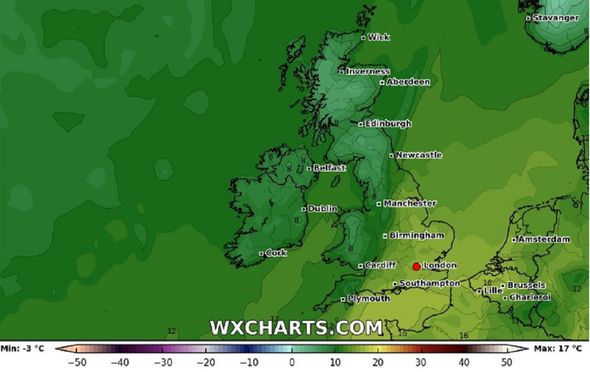 South-eastern areas are set to be warmest on Saturday afternoon, this map shows (Image: WX Charts)

“Showers fewest in some eastern areas. Windy especially in the northwest. Less mild.”

Early Sunday morning should bring temperatures in the low double figures around southern parts of England, and around 8 degrees in Scotland.

Western areas are likely to be the most showery during Sunday afternoon, while some eastern regions may see some sunshine from the north to the south.

Mr Miall said the weather this weekend would be “fairly typical autumn” but “unsettled” nonetheless. 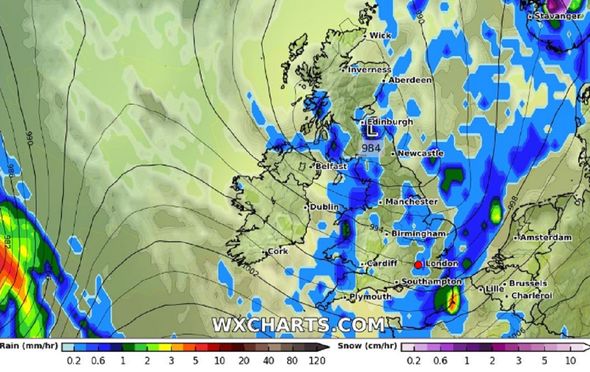 The unsettled skies will continue on into next week as well, with Monday likely to be breezy and showery with some sunshine, according to the BBC.

It is likely this will continue through Tuesday and Wednesday as well, perhaps with longer periods of rain.

Coinciding with the rain, clocks are also due to go back an hour at 2am on Sunday morning.

This marks the end of British Summer Time, and the UK will begin observing Greenwich Mean Time instead.

Gasperini on 2:0 with Liverpool: This is unbelievable. Atalanta played their football
Simeone on Maradona's death: Impossible to believe. He infected us with football. This is a great loss for me
Bayern and city are already in the Champions League play-offs. Who is already with them, and who is in step?
Conte Pro 0:2 from Real Madrid: We saw the difference between them and us. Inter made too many gifts
Liverpool have never scored a goal against Atalanta in their home Champions League match
Liverpool lost at home for the first time in 2 years! Gave Atalanta a couple of goals and never hit a goal
Zidane about 2:0 with Inter: real deserved to win by playing well. I am very happy with the players
Source https://www.express.co.uk/news/weather/1351712/UK-weather-weekend-rain-winds-temperatures-gales-clocks-go-back-autumn-ont?utm_source=feedburner&utm_medium=feed&utm_campaign=Feed%3A+daily-express-news-showbiz+%28Express+%3A%3A+News+%2F+Showbiz+Feed%29