Temperatures will soar to 17C in the north east of England on Monday, November 2, according to the latest maps from Netweather showing the maximum temperatures. These areas will include Liverpool and Newcastle. And south eastern regions including London, Kent and Essex will see highs of 18C.

Brian Gaze at Weather Outlook claimed there will be "notable warmth" next month.

He tweeted: "I've not looked at the data in depth but am beginning to wonder if we could see some notable warmth in early November.

"At this time of year a lot can go wrong but is 20C out of the question? 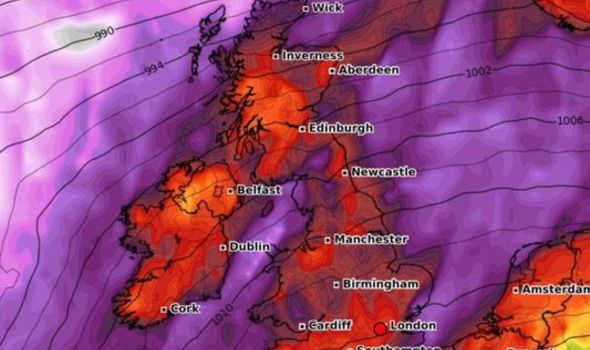 Temperatures will begin to creep up to double figures this week, according to the Met Office.

A jet stream over the North Atlantic will blast low pressure towards the UK.

The jet stream will be pushed over due to cold air from Canada and northern US tracking towards Britain.

This cold air will contrast with warmer than average sea surface temperatures over the northwestern Atlantic. 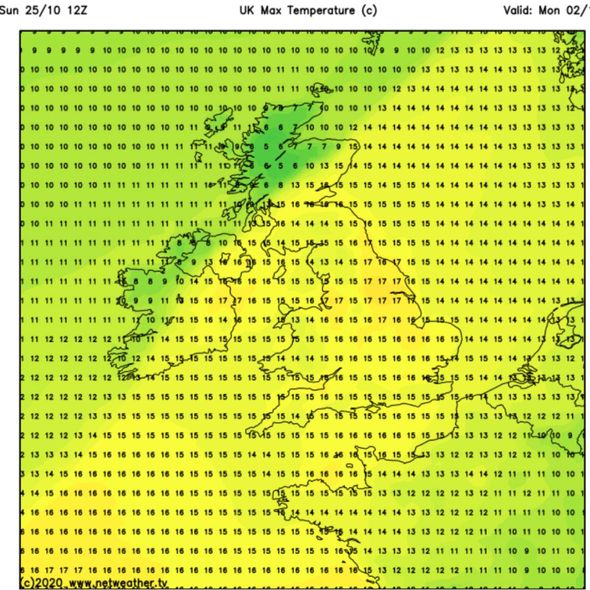 Forecasters are watching the post-tropical lifecycle of Hurricane Epsilon this week.

It is expected to merge with a trough and combine into a powerful non-tropical storm in the North Atlantic.

Storm Epsilon will then push a deep low pressure towards the UK next week, potentially bringing heavy rain and gales.

Grahame Madge told Express.co.uk last week: "The storm is very far out right now but we cannot take that as certainty as sometimes they can push towards the UK.

"Forecasters will be keeping an eye on where the storm will be next week as it pushes deep low pressure across the North Atlantic." 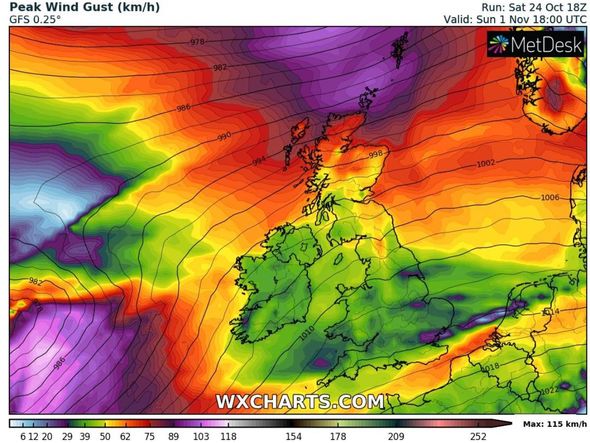 The forecast said: "Unsettled conditions are expected to dominate during the period, with most parts of the UK seeing plenty of cloud and outbreaks of rain and showers.

"It will often be windy, with a risk of gales or even severe gales, especially in coastal areas.

"However, some brief bright and dry spells are still likely at times in all parts of the UK, with the most settled conditions probably found across eastern and south-eastern areas.

"Overall, temperatures are generally looking to be close to normal for the time of year. Conditions may turn more settled close to the end of the period, particularly in the south." 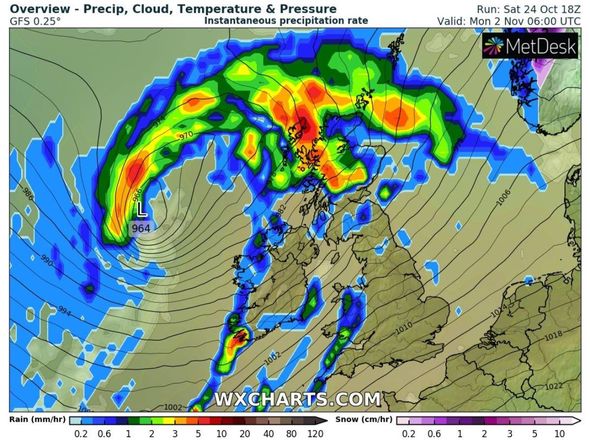 UK weather forecast: A jet stream will push over from the Atlantic (Image: WXCHARTS)

Netweather's long-range forecast for the end of October also predicted warmer temperatures in the south east of England.

It said: "Later in the week it will generally turn warmer than average with a stronger tropical maritime influence, meaning that dull damp weather will be common over and to the west of high ground.

"But the south and east of England and sheltered parts of eastern Scotland will see some sunshine coming through at times.

"Mean temperatures will be very close to the 1981-2010 long-term normal during this week, but up to a degree above in the south-east and about 1C below in Northern Ireland."

Agent of coronavirus from the Beginning: I feel fine. A test is a test
Barcelona has reached an agreement in principle with the players to reduce salaries. The club will save 122 million euros
Barca presidential candidate farre: We need to get Neymar back. He also wants to move
Maradona's son said goodbye to his father: You will never die, because I will love you until my last breath
Jose Mourinho: Chelsea have an amazing squad. Can play Mendy or the most expensive goalkeeper in the history of the Premier League
Andrea Pirlo: Ronaldo is a bit tired after so many games. We agreed that he will rest
Maradona's manager: Diego didn't want to live anymore. He allowed himself to die
Source https://www.express.co.uk/news/weather/1352166/UK-weather-forecast-met-office-warning-heat-November-long-range-maps-BBC-weather-radar?utm_source=feedburner&utm_medium=feed&utm_campaign=Feed%3A+daily-express-news-showbiz+%28Express+%3A%3A+News+%2F+Showbiz+Feed%29