Forecasters have warned snow will start to fall in Scotland and Northern Ireland on Sunday. Northeastern regions of the UK will then be caught up in blizzards on Monday, along with wind reaching speeds of 65mph. The snow will be caused by a system of wet weather mixing with low temperatures in the north.

Snow maps from NetWeather, which uses a global forecast system to generate its predictions, show widespread swirling lines of green, red and yellow sweeping in from a north eastern direction from Monday, January 27 onwards.

The lines show the wintry weather blasting northern parts of Scotland and Northern Ireland first during the beginning of the week.

The weather front then moves way down across the nation in the coming days southern areas of the UK, including most of Wales and the south of England.

Met Office forecaster Bonnie Diamond said: “Over the week and by next week we will be returning to unsettled weather. 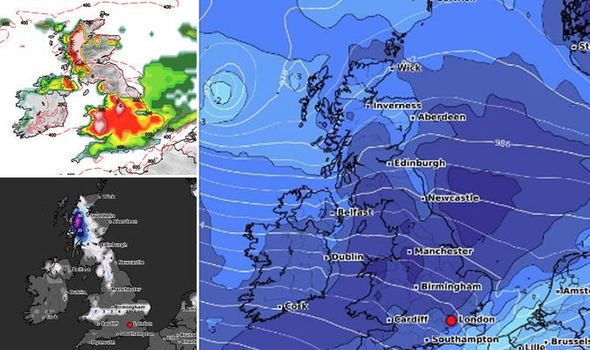 “The first signs of snow are on Sunday for northern parts of the country.

“A low pressure system across the UK on Monday is bringing wet and windy weather.

“As rain tied up with that system moves into the colder parts of the north-east it could fall as snow across higher ground.”

The Met Office also warned temperatures will remain wintry, as a blanket of frost and fog will settle. 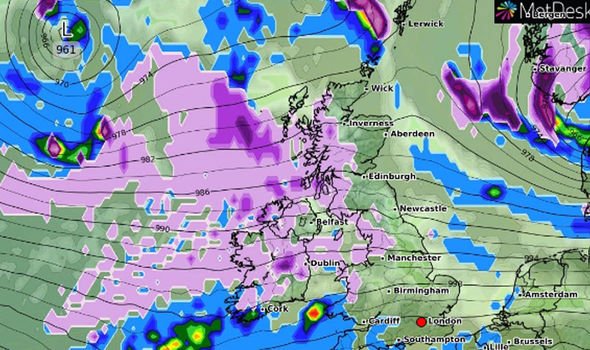 A statement on its website said: “Next week looks likely to continue the unsettled theme with a mixture of spells of locally heavy rain and showers with colder and brighter interludes.

“The heaviest of the rain is likely to be focused over western parts with snow possible across some northern hills.

“It will be windy throughout with a chance of gales at times, which will reduce the risk of overnight frost and fog.

“Towards the end of the period the south and east may see slightly more settled conditions moving in. 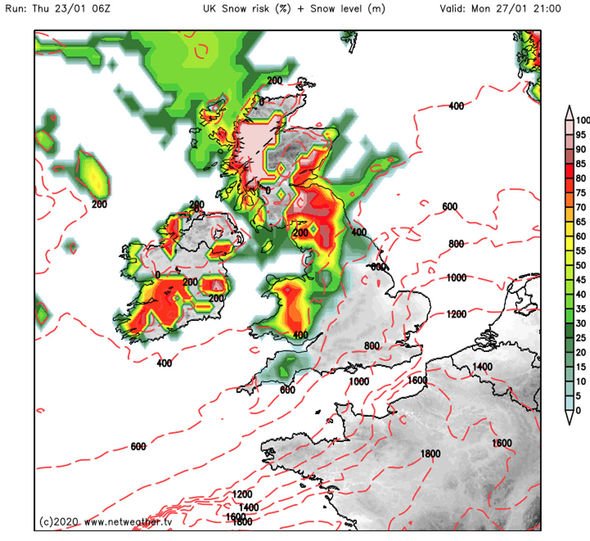 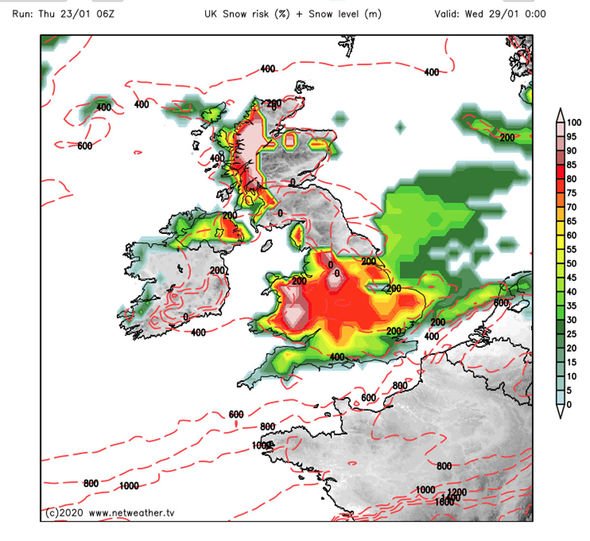 “This will lead to an increased risk of frost and fog overnight.

“Temperatures will fluctuate between mild and rather cold at times as bands of rain move across the UK.”

The BBC has also predicted adverse weather conditions next week.

Its outlook for next week has forecast strong winds and heavy rain on Monday, which will bring wintry conditions in northern regions. 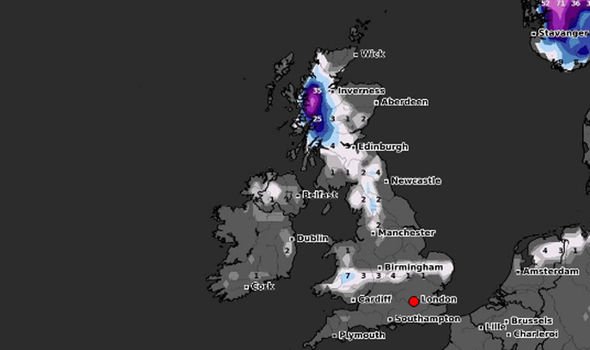 BBC weather said: “A few showers in the west ahead of brisk winds and rain pushing in from the west on Saturday.

This will mainly affecting north-west Scotland and Northern Ireland.

“Rain will spread east across the UK on Sunday, with some sunny spells and showers following on behind, these showers potentially frequent and wintry in the north-west.

“Strong winds and heavy rain on Monday, wintry in the north.”

Manchester United have a problem to solve in Champions League pursuit

Sharon Horgan: ‘I want adventures. I want to do stuff that's challenging’

M606 and M62 works planned for the coming week

Adorable boy, 4, with rare blood disorder gifted his own special football pitch in the back garden

Greener groceries: will they cost the earth or save it?

Euan McColm: Why don’t voters take Sturgeon at her word on education?

In 1970, driven by chaos and energy, we felt like pioneers in female protest | Sheila Rowbotham

Meet the hero pensioner, 77, who bravely fought off an 'armed' mugger