Oceanic whitetip sharks have 'killed the most people' says expert

The most recent reported sighting took place yesterday when an unknown species of shark was spotted close to Boscombe Beach in Bournemouth. The beach was immediately evacuated with swimmers being told to return to dry land immediately. Red flags were put up by RNLI lifeguards, indicating a serious hazard in the water for swimmers. The beach has since been fully reopened, after lifeguards conducted checks.

One local resident tweeted a video of the scene, with the caption: “Shark sighting at Boscombe Beach.”

She later added: “Lifeguards are still out there looking for ‘marine wildlife’.

“Unconfirmed at the moment but suspected. Bathers have just been allowed back in.

“All swimming again. Lifeguards still out on jetski. 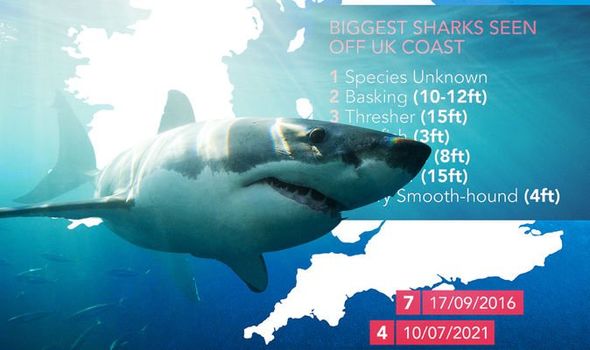 The UK's shores are regularly visited by sharks that are searching for cooler waters. (Image: Getty) 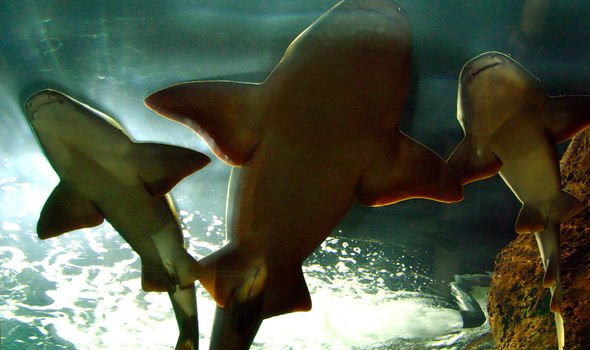 “As a precautionary measure, lifeguards asked beach visitors to evacuate the water and put up red flags.

“Lifeguards used their Rescue Watercraft (RWC) to scan the area and visitors were able to go back into the water half an hour later. 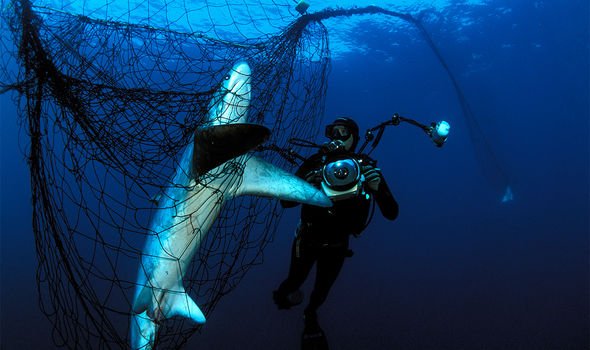 “The RNLI recommends you always visit a lifeguarded beach and report any concerning wildlife to the lifeguards as soon as it’s spotted.”

Of the over 400 shark species found worldwide, at least 21 can be found in British waters all year round.

However, there have been no recorded unprovoked shark attacks on humans, in UK waters, since records began in 1847.

See below for a map of the biggest shark sightings reported off the UK coast. 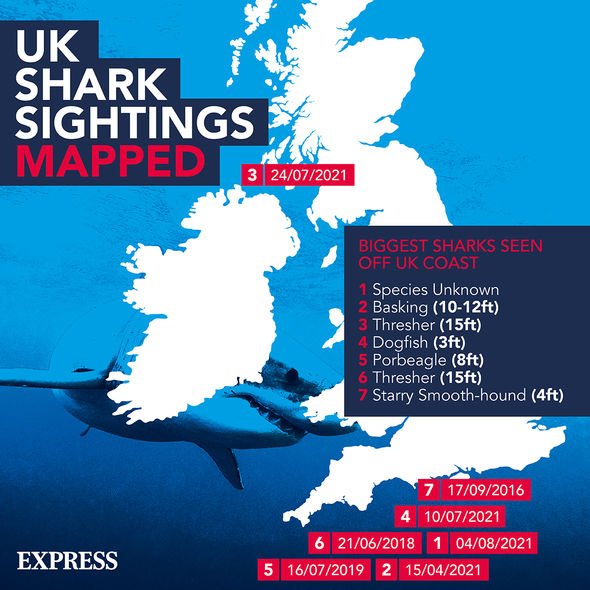 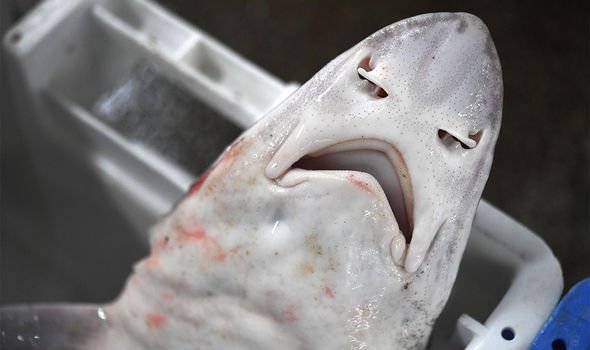 Number one on the map shows the sighting that was recorded on Boscombe beach on August 4. The species of shark still remains unknown.

The second reported sighting took place in the Torquay Marina where a basking shark was spotted in April. Basking sharks are the second-largest fish in the world, with the one in Devon being estimated at around 11ft. Basking sharks are most often seen on the west coast of the UK and are listed as endangered by the International Union for Conservation of Nature.

Sighting number three was reported near Rathlin Island in Northern Ireland. A nature enthusiast spotted, what she believes, was a thresher shark when she was travelling on the Rathlin to Ballycastle ferry. Thresher sharks have very long tails, making up about half the length of their bodies, which they use to hunt food. They are not generally considered dangerous to humans. They are listed as "vulnerable" in the International Union for Conservation of Nature's Red List of Threatened Species.

The fourth reported sighting took place at Branksome Chine. A Poole resident found a washed-up Dogfish on the beach. Spiny dogfish, also known as spurdogs or mud sharks, is one of the common species of shark, found in abundance along northern Atlantic and Pacific coasts. The spiny dogfish is grey in colour with white spots, and measures about 60 to 120 cm in length.

Sighting number five occurred in Portland, UK. Anglers spotted six huge porbeagle sharks when they were out with customers on a charter fishing trip in October, 2017. Porbeagle sharks, from the same family as great white sharks, can be found around the UK in deep waters. Despite being described by the Shark Trust as “large, powerful sharks” with “sharp teeth and abrasive skin,” porbeagle sharks are not considered harmful to humans and rarely come to shore.

The sixth sighting took place in Lyme Bay in 2018 when a 15ft thresher shark was spotted by a group of tourists. The enormous shark jumped vertically through the air before slapping its elongated tail on the surface of the sea. Thresher sharks are usually found in the warmer waters of the mid-Atlantic but this 15ft long predator, which weighed about 350lbs, appeared about 30 miles south of Lyme Regis.

Sighting number seven occurred in Sandbanks in 2016 with a 2ft-4ft Starry Smooth-hound being spotted. The shark was stranded on the beach when beachgoers came across it. This species is one of the UK’s native sharks and they are usually found in deeper water. Although the name ‘shark’ may spark alarm bells, the Starry Smooth-hound is in fact completely harmless.

The Latest: Pfizer close to big step toward kids' vaccine

Busy road blocked in both directions after car flips during crash

'I want to live’: Oleksandr Usyk ready for time off after biggest fight | Donald McRae