A COUNCIL has been blasted for replacing their normal Christmas tree with a “vandal proof” rooted one – that locals say looks like it has “caught coronavirus”.

Pictures show the sorry-looking Christmas tree which has already turned brown with no decorations on it in Connah’s Key, Flintshire.

Councillors took the unusual decision to plant it to stop vandals pinching it, but now it is so ill they cannot even put lights on it.

They made the move after a £300 tree was destroyed within days in 2017 with the replacement’s lights twice ripped down.

But the latest venture was blasted online as looking like “recycling last year’s dead tree” with one writing: “It looks like it’s got coronavirus.”

Some wished the tree a speedy recovery while Lee Murphy joked: “If they can’t look after a tree how can they look after a community?”

“Due to the vandalism of the tree in previous years, it was hoped that a rooted tree would be safer and also kinder to the environment.

“Unfortunately, the tree has not fared very well in its first year, and whilst not dead, it does not look healthy as pictures circulating on social media illustrate.

“We have attempted to revive it with fertiliser and hope in time that it will thrive to become a focal point of positivity at Christmas.

Unfortunately, the tree has not fared very well in its first year, and whilst not dead, it does not look healthy as pictures circulating on social media illustrate

“Therefore, we will not be lighting this particular tree this year.

"We will do our best to look at other options for a Christmas tree this year and consider a longer term solution based on the feedback so far.”

They include a sorry-looking pine in Felixstowe, a stack of crab and whelk boxes in Norfolk and bizarre skiing animals in Hampshire.

Alton in Hants is one of the towns being slammed for its spruces, after it erected two skiing marmots instead of a Christmas tree.

Marmots are large rodents typically found in mountainous areas like the Alps - and they hibernate during winter. 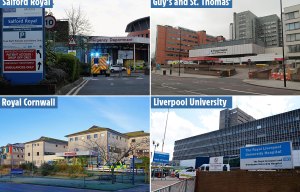 But council chiefs in Alton have unveiled the £8,400 animals - lit up by thousands of LEDs - for the second year running.

A disappointing shrub-like tree can also be found in Sunderland, while a sea-themed structure was built in Norfolk.

Workers at Wells-next-the-Sea on the North Norfolk coast stacked 121 crab and whelk pots into the shape of a tree – after the Covid pandemic stopped their usual decorations.

Bayern will play Egypt's Al-Ahly or Qatar's Al-Duhail in the Club World Cup semi-finals
Villalibre about delaying time by Athletic: Barcelona is worth a billion euros, and we wanted to win the Super Cup at the cost of our lives
Andrea Pirlo: Juventus want to win a tenth league title. Now is a difficult moment, but the ambitions remain the same
Dynamo crossed the medical examination and Cyberpunk 2077: they decorated the hospital with graphics and stuffed everything with Easter eggs
Joan Laporta: If Messi wants to gain experience in football in America, it will be useful for everyone
Ter Stegen and the Barcelona defenders have filed complaints against Griezmann for commenting on a poor defensive performance after the Super Cup (Cadena SER)
PSG can buy Barca defender Emerson for 25 million euros
Source https://www.thesun.co.uk/news/13363201/uks-saddest-xmas-tree-covid/