In recent days many parts of the UK have seen some warmer weather, which also prompted the arrival of Flying Ant Day on Sunday. Many a barbecue or summer picnic was spoiled by the flying insects, but for those hoping for a more pleasant, ant-free weekend this week, weather maps suggest the hot weather could be making a return.

June was a record month for UK weather, with many regions seeing heatwave conditions.

The hottest day of the year was recorded last month when the mercury clocked in at 31C at Heathrow Airport.

While the temperatures are not expected to reach quite such staggering highs this weekend, it does look like many regions will see some hot weather this weekend.

According to WXCHARTS maps, which use data from MetDesk, much of the UK will see maximum temperatures above 20C on Saturday, July 18. 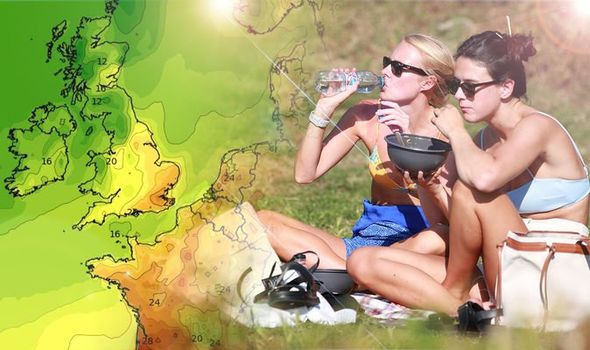 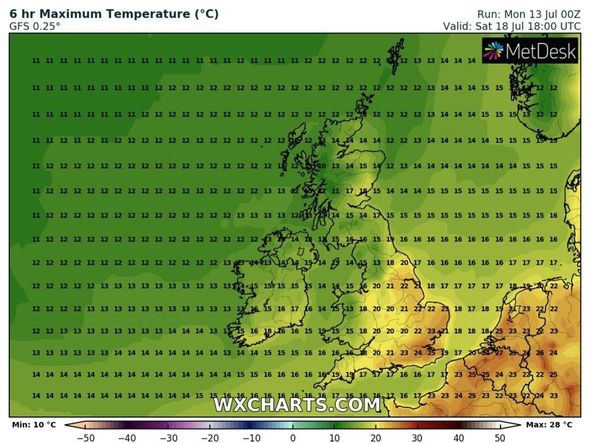 The highest temperatures are expected in the south-east of England, where highs of 25C could be possible for some areas.

Other parts of southern England are expected to see maximum temperatures in the range of 20 to 24C.

On Saturday parts of northern England are expected to see temperatures around the high teen’s, with temperatures slightly cooler in Scotland, Northern Ireland and Wales.

Sunday also looks likely to be a warm day for many, though slightly cooler than Saturday, with highs of 22C possible in the south-east. 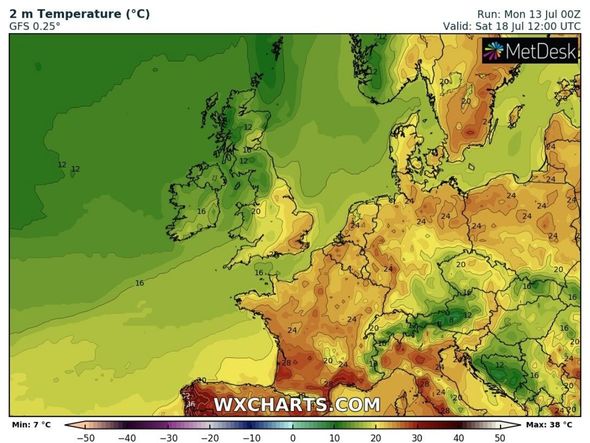 UK hot weather MAP: Saturday, July 18 is expected to be a warm day for much of Europe (Image: WXCHARTS) 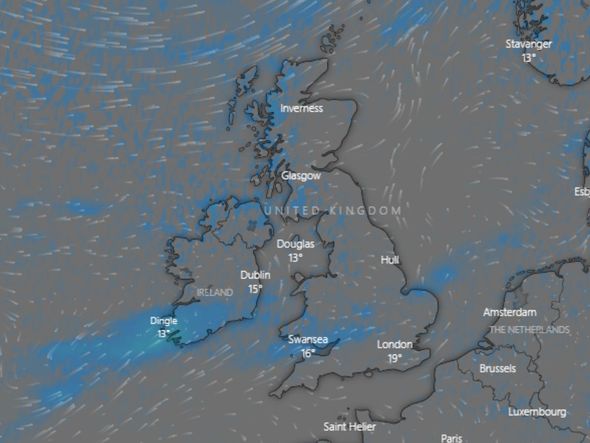 UK hot weather MAP: There will still be some rain at times on Saturday, July 18 (Image: WINDY)

Wales, Scotland, Northern Ireland and northern England will see temperatures range from the mid to high teen’s on Sunday, while many parts of southern England are expected to see highs above 20C again.

In their long-range forecast for Friday, July 17 until Sunday, July 26, the Met Office is forecasting a “dry and settled” start to the period.

The Met Office forecast states: “Through the beginning of the period, it will be mostly dry and settled for many areas, especially in the south of the UK.

“More unsettled conditions with spells of rain and strong winds are likely to affect the north and northwest at times.

“There is a chance that these wetter interludes could spread more widely and affect much of the UK.

“Temperatures are likely to be mostly around normal, although it may become warm for a time in the south and perhaps very warm in the southeast.”

While Britain is expected to see some warm weather this weekend, some parts of Europe could see temperatures as high as 38C according to WXCHARTS 2m temperature maps. 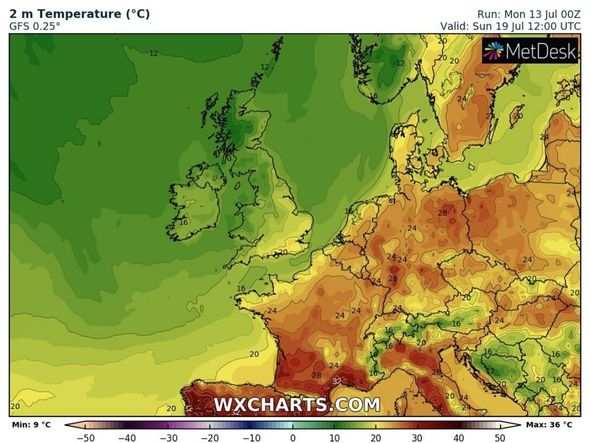 UK hot weather MAP: Sunday is forecast to be slightly cooler than Saturday for the UK (Image: WXCHARTS) 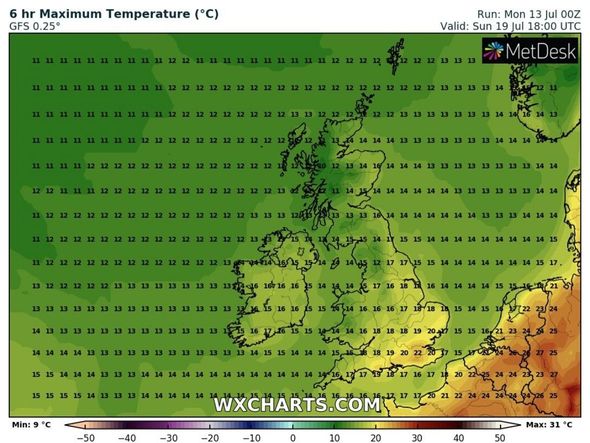 For the UK, this month could prove to be the hottest July on record according to bookmakers Ladbrokes.

Jessica O'Reilly of Ladbrokes said: "July's forecast is looking joyful and it looks like the mercury is going up and up for the rest of the month."

Ladbrokes have cut their odds to 13/8 that July 2020 sets a new record as the hottest ever.

And it's also just 1/2 the thermometer hits 30C anywhere in the UK before the week is out.

Raheem sterling: Looking for tickets to Lisbon. From the 10th to the 24th. Retweet if you can help
Pep Guardiola: Gabriel is the best player of matches with Real Madrid
Three heroes of Lyon in the match with Juve – among them the defender, whom the fans drove in the fall
Manchester City and Lyon will meet in the 1/4 final of the Champions League on August 15 at Jose Alvalade
Photo of Pep and Zizou – just a gift for Showsport users
Ronaldo was eliminated so early from the Champions League for the first time in 10 years, although he tried very hard – in the playoffs for Juve, only he scores
Rudi Garcia: to Pass Juventus is a feat. The most pleasant defeat in my career
Source https://www.express.co.uk/news/weather/1308803/UK-hot-weather-map-heatwave-Met-Office-forecast-Europe-latest?utm_source=feedburner&utm_medium=feed&utm_campaign=Feed%3A+daily-express-news-showbiz+%28Express+%3A%3A+News+%2F+Showbiz+Feed%29