The total number of people who have lost their lives to the bug in Britain is now 87,295 after 1,280 fatalities were reported today.

Today's rise in deaths is slightly smaller than it was last Friday, when 1,325 fatalities were reported.

But it follows a trend of high numbers all week, with the past four days each seeing more than 1,000 people die from the virus in Britain.

The number of new infections today is considerably smaller than that recorded this time last week (68,053) - the highest number of infections logged on any day since the start of the pandemic.

It is nonetheless higher than yesterday's tally of 48,682 new cases.

The latest figures mean at least 3,316,019 have now caught the bug in Britain.

In England, a further 807 fatalities were recorded, bringing the total number of Covid deaths in English hospitals to 59,519.

The patients, who died between November 18 and January 14, were aged between 32 and 101 years old - and all except 51 had known underlying health conditions.

In Scotland, 2,160 new cases were logged along with 61 fatalities.

And 26 more people lost their lives from the virus in Northern Ireland.

It comes as Boris Johnson begs Brits to stay home this weekend, urging everyone to "think twice" before leaving the house.

The PM vowed Britain would eventually beat Covid "jab by jab", but warned the nation is still facing a perilous situation.

In a video message, Mr Johnson said: "We've already vaccinated hundreds of thousands more people than any other country in Europe.

"But until the job is done, we must keep this virus under control."

The PM reiterated that one in three people can carry coronavirus without any symptoms, branding them "silent spreaders, unwittingly infecting others."

It's safest to assume you have Covid, so please, really think twice before leaving the house this weekend.

He added: "It's safest to assume you have Covid, so please, really think twice before leaving the house this weekend."

Experts believe the stay at home rules are helping to drive Covid cases down, with hopes the tide may be turning against the deadly second wave.

New Government estimates show Britain's official R rate has narrowed - and could be below 1 in London.

The crucial value is now between 1.2 - 1.3 across the country based on the latest data, available up to January 11.

Last week Sage estimated that the UK's R rate -  the number of people an infected person will pass Covid on to - was between 1.0 and 1.4.

And at Cambridge University said they believe the figure has dropped below one in some parts of the country.

The narrowing in the latest official R rate reflects greater certainty around the estimates, the Department of Health said today. 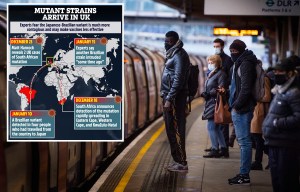 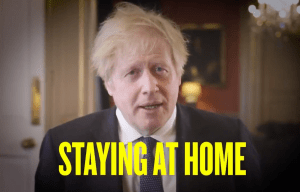 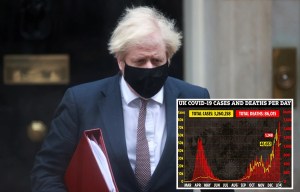 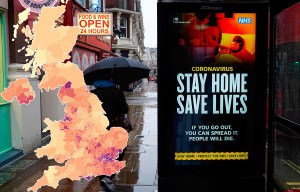 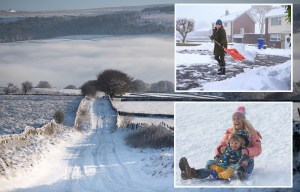 Snow to hit London and warnings for 10cm in East Anglia, Kent and Sussex

The regional variations indicate that areas that have been under tougher restrictions for longer - such as London, East of England and the South East - are seeing a slight decline in the numbers of people infected.

But regions such as the North West and South West continue to see infections rise, which is likely to reflect the spread of the new variant in these areas.

Deaths are yet to peak, with numbers rising at record-breaking rates this week.

Man City have not lost in 27 consecutive games. Best streak since 2017
Guardiola has 200 wins in 273 games at the helm of Man City. Mourinho has so many wins in 309 games with Chelsea
Paul Pogba: We need to help people. Today I'm Paul Pogba, tomorrow I'm nobody. You need to use influence
De Bruyne came in 10th in the history of the Premier League in the number of assists - 77. The leading Giggs - 162
Willian: I really wanted to stay at Chelsea. Leaving for Arsenal is a difficult decision, there is a serious rivalry between the clubs
Kane will not leave Tottenham this summer. Clubs do not have the money for such large deals
Antonio Conte: The fans of our rivals said that Conte should be kicked out of Inter. It would help them
Source https://www.thesun.co.uk/news/13754625/coronavirus-daily-deaths-pass-1000/

What's in an adjective? 'Democrat Party' label on the rise

Police ramp up clampdown on protesters in Myanmar

Covid vaccine: Sage experts urge people to stick to restrictions after getting jab

Prince Philip, 99, now in longest ever hospital stay as he fights infection