THE number of coronavirus deaths in the UK rose to 40,465 today after 204 more fatalities were announced.

Today's rise is smaller than it was yesterday, when 357 deaths were logged.

It is in fact the smallest death rate recorded on a Saturday for the last 11 weeks - although last Saturday's figure was similar (226).

NHS England revealed today that 27,359 have now died in hospitals across England - recording a further 75 deaths in the last 24 hours.

Patients in England were aged between 43 and 100 - and all of them had underlying health conditions.

In Wales, ten more people have died, bring the overall death toll in Wales to 1,393.

In Scotland, six more deaths were confirmed today, bringing the tally there to  2,415.

The UK currently has the second highest official coronavirus death toll in the world after the US - where 108,211 people have died from the bug.

It is however difficult to draw direct comparisons between countries where population sizes vary and countries record Covid-19 data in different ways.

It comes as new research shows the crucial R rate has risen back above one in some parts of England.

The Government has stressed throughout the pandemic that the R rate must remain below one in order to avoid a second peak of the virus.

If it rises above this level, the disease can spread exponentially, infecting more and more people.

Last night, Matt Hancock raised the prospect of localised lockdowns in some parts of the UK, with places like the North West and South West of England more infected than others.

New research by Public Health England and Cambridge University suggests the reproduction rate is 1.01 in the North West and 1.0 in the South West.

There is also evidence to suggest the value has risen in all regions, saying it was probably due to increasing mobility and mixing between households in public and work settings.

He added that there was a "challenge" in both the North West and the South West of England regarding the spread of the disease.

In the documents, Professor Clifford Stott of Keele University (a professor specialising in hooliganism and riots) and the security sub-group of scientists, wrote: "Restrictions imposed in the UK during the epidemic have not led to conflict thus far because they have been perceived as fair (for the most part)."

"Any sense of inequality arising from the imposition of selective measures would likely lead to civil disorder and feed the propaganda of extremist groups and hostile states.

"Households within local areas may also fear retaliation if cases within a neighbourhood prevent release and may conceal cases as a result."

The scientists also warned that local lockdowns will ruin the sense of community that Brits have felt, and kill the spirit of "we're all in this together".

Cutting up parts of towns of cities would shatter Government support for the measures, and "could lead to significant public disorder", the documents warned. 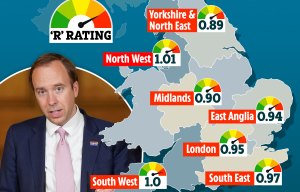 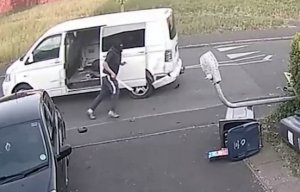 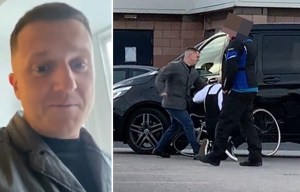 In a bid to halt the spread, the Government announced this week that wearing face masks on public transport would be made mandatory from June 15.

Passengers without a face covering will not be allowed to board or told to get off at the next stop.

Matt Hancock has also now said the rule will apply to hospital staff and patients - although some NHS bosses have complained they were given little warning.

Josep Bartomeu: Messi will remain at Barca after his career ends
UEFA: For many alleged violations of Manchester City, the 5-year Statute of limitations has expired
CAS did not establish the majority of Manchester City's alleged violations
Manchester City: the Club welcomes the decision of the CAS and thanks for the correct judicial process
Mourinho's classic plan for big matches worked perfectly. Arteta's crude Arsenal is a convenient target
Bartomeu on Xavi in Barca: There is a time for everything. We are not looking for a coach right now
Mourinho about the Europa League: Ask Hamilton if he wants to win Formula 2
Source https://www.thesun.co.uk/news/11798129/coronavirus-deaths-uk-rise/

New presenters confirmed to replace Phillip & Holly on This Morning

Where are Phillip Schofield and Holly Willoughby on This Morning?

Holidaymakers in Spain 'sleeping on beaches' as hotels closed

West Lothian Council workers thanked for their work during pandemic

Tourists in Spain 'sleeping on beaches' after finding hotels closed

The world needs grown-up leadership. Time for Germany to step up | Shada Islam

Are you having a breakdown or do you actually like the walls you painted dark grey?

Poem of the week: The Sparrows of Butyrka by Irina Ratushinskaya

Form, fixtures, results and odds - who can avoid the drop?

More than 30,000 Asda workers take the supermarket to the Supreme Court in row about wages

Michael Kors launch 50% off sale including bags, shoes and accessories from £16

A Northern Quarter institution has confirmed its permanent closure

Tesco still has buying restrictions on six products after coronavirus

250,000 people at risk of eviction and homelessness in just days, Labour warn