France’s most senior naval commander has said future conflicts are likely to be fought at sea and in cybersphere, citing the “rapid rearmament” of countries such as China as a potential threat.

Admiral Pierre Vandier made his comments after the French Marine Nationale and forces from five allied countries, including the UK, took part in what he described as a unique two-week exercise intended to prepare for “composite threats”.

Political and diplomatic relations between London and Paris sank to a new low after the Aukus row in October when Australia cancelled a contract to buy French submarines and signed a joint security pact with the UK and US to buy American vessels instead, but defence links between the two countries remain firm.

Lt Commander Duncan Abbott, the only Royal Navy officer aboard the French aircraft carrier for Polaris 21, said he had seen no post-Aukus tensions.

“There exist inextricable ties between the French and the UK and there are many exchange officers like me working with the other’s military. All these relations are carried out day to day on a personal level and there’s been no change,” he said.

In an address to crew and journalists aboard the aircraft carrier Charles de Gaulle, the flagship of the French fleet, as the Polaris exercise came to an end, Vandier said: “For the last 20 years we have seen naval forces involved in conflicts that have taken place mainly on land, as in Syria, Iraq and Libya.

“Today the maritime environment is challenged or will be, by submarines, by cyber-attacks, by space attacks and by a naval war itself. Our mission is to understand these factors in an operational setting.”

Vandier said the “forced march” to expand of certain navies he would not name in the Mediterranean - clearly understood to be Russia - and China in the Pacific were the main threats.

“Today we are seeing the growth of navies to two or three times what they were. We have seen the tripling of the Chinese navy in 10 years so that it now exceeds the US navy,” he said.

The rapidity of international rearmament was creating disorder and playing with the “keystone of international stability”, hesaid. “We cannot wait until it’s too late, we cannot be taken by surprise, we have to prove our credibility. In an unrestricted, uncertain, volatile world if we want to be respected we have to show our pugnacity. We have to prepare for combat in all situations.”

Polaris 21, one of the biggest ever international sea exercises, involved 6,000 military personnel from six countries - all Nato allies - and half the French navy in the simulation of a “high intensity” battle for the control of occupied territory. 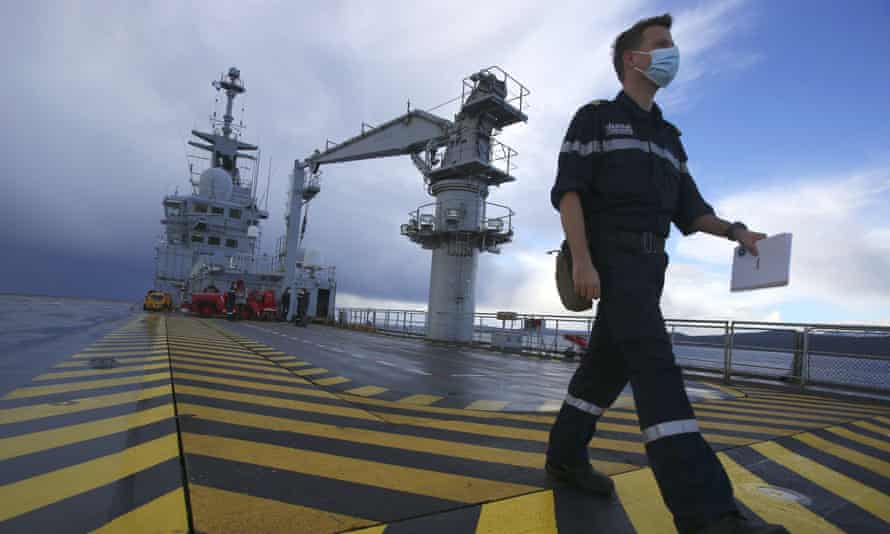 A naval officer on the deck of the French helicopter carrier Tonnerre. Photograph: Pascal Pochard-Casabianca/AFP/Getty Images

Twenty-four battleships took part, including vessels from the US, Italy, Spain, Greece and the Royal Navy’s Type 45 destroyer HMS Dragon, as well as French land and air forces. Those participating were divided into two enemy camps and engaged in an intense six-day “battle” in real time controlled from the Charles de Gaulle.

At one point there was a blackout of satellite communication for 24 hours leaving forces to operate in what officers described as the “fog of war”.

“It was a return to the 1980s,” said one officer in charge of coordinating flights. “We had no idea where the enemy was.”

All crew were ordered to turn off their mobile phones to avoid being traced. A ship can be tracked if a single sailor has misconfigured one of their applications, officers said.

“Warfare even at the tactical level has become completely composite today. The digital traces we leave are tools for the combatants,” Vandier said.

Emerand, a fighter pilot, said the 16-day exercise had been intense. Two squadrons of the jets were repeatedly scrambled without notice as they would be in a real combat and a simulated mission took place to rescue an ejected fighter pilot from enemy territory.

“It was a unique exercise over a large area and for a long time,” he said. “As well as testing our own capacities it sent the message of what we and our allies can do. It allowed us to see our capacity to react against an enemy that is as well armed or even better armed than us.”

The Charles de Gaulle and the UK aircraft carrier HMS Queen Elizabeth also took part in Exercise Gallic Strike in the western Mediterranean in June, showing how the two navies could work together.

Abbott, who is on detachment to the Marine Nationale at the naval base in Toulon, said Polaris had tested the French navy’s “plug and fight” capabilities, meaning the ability to integrate non-French forces into a national deployment.

“The whole purpose of the exercise was to look at fighting in a high-intensity situation, to test the French and allied units’ capability to respond to unpredictable and different threats in an agile way. What we learned is that a ship like HMS Dragon could have been integrated. It was a really useful training opportunity,” he said.

“It was about fighting above, on and under the water. The Royal Navy and Marine Nationale are similar in many ways including size and the way we operate. It’s unlikely France would be involved in something and the British not.”

Covid restrictions set to be lifted from 6am on Saturday

Energy giant E.ON slammed by shop worker for sending socks to help her use less fuel

How much money will my child's school lose? Use our interactive tool to find out

Woman wandering the streets approached by 'angel' after disaster date

Deadline call from Lanarkshire councillor over much needed housing repairs

Millionaire tried to sue neighbour for not putting up curtains in £3.2million flat

Ireland’s pubs and restaurants report ‘apprehension’ ahead of expected reopening

Next of kin appeal after death of David Owens, 68