CONOR MCGREGOR is hoping to fight a whopping 'seven' times over the next 18 months.

McGregor, 32, will return to the octagon tomorrow night in the main event of UFC 257 in Abu Dhabi, where he'll rematch his old featherweight rival Dustin Poirier.

And the former two-division UFC champion is hoping his first outing in over a year will kickstart a busy 18 months.

He told ESPN: "The truth is the fight game will never get rid of me. Conor McGregor will be here until the day I go out. So that's it.

"If they line me up, I'll get about seven fights in the next year and a half. That's what I want."

McGregor wanted to fight three times last year but had those plans scuppered by the pandemic and a temporarily-frosty relationship with UFC president Dana White.

And the Irishman hopes it won't be too long before his next fight is booked.

He said: "I've got four fights left on this contract with the UFC.

McGregor's frustration with his failure to land a second fight last year prompted him to announce his third retirement from the sport, which, like his previous two, soon came to an end.

He recalled: "It was like, you know what, you're not gonna treat me with respect? I'm gone.

"Sometimes you have to take yourself out of a situation if you're not being respected or appreciated. Just distance yourself from it." 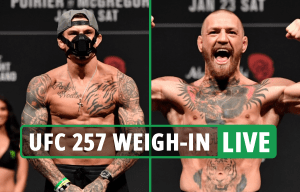 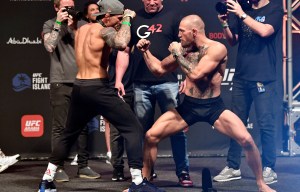 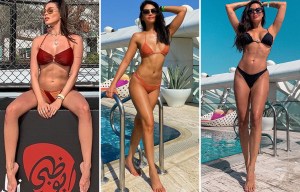 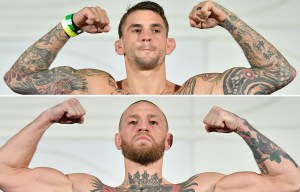 With his relationship with the UFC now back on track, activity is all The Notorious is craving.

McGregor's clash with Poirier will be a rematch of their featherweight showdown at UFC 178, which the former won in devastating fashion.

The pride of Dublin knocked out the American in just under two minutes to announce himself to the world as a legitimate 145lb title contender.