Donald Trump may still want to purchase Greenland – but the US president has no plans to embellish the island’s coast with a Trump Tower.

On Monday night, Trump tweeted an edited photo of a coastal town dotted with colorful homes – all dwarfed by a golden skyscraper bearing the US president’s name.

“I promise not to do this to Greenland!” Trump said. 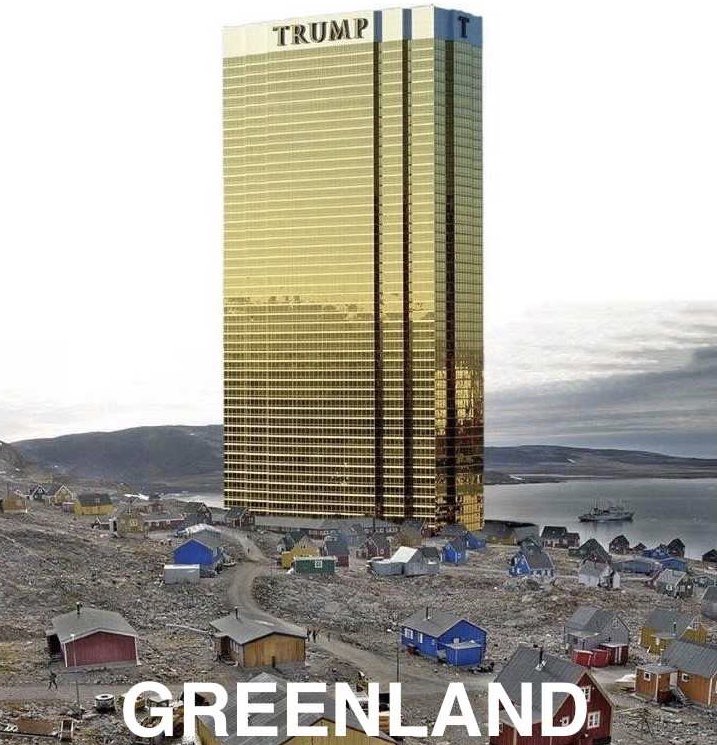 I promise not to do this to Greenland! pic.twitter.com/03DdyVU6HA

The tweet came a day after he confirmed news reports that he was mulling the idea of buying the autonomous Danish territory, though he has acknowledged that such a deal is “not No 1 on the burner”.

Front of mind, perhaps, are warnings from economists that the US economy is teetering toward a recession. But Trump, ever the businessman, apparently cannot resist the prospect of what he has called “essentially a large real estate deal” with miles of coastline.

“Strategically it’s interesting and we’d be interested but we’ll talk to them a little bit,” Trump told reporters on Sunday.

News of the president’s interest in buying the icy island were met internationally with roars of laughter. But on the island and in Denmark, the response ranged from incredulous to indignant.

The Danish prime minister has called any discussion of a sale “absurd”.

“We are open for business, but we’re not for sale,” Greenland’s foreign minister, Ane Lone Bagger, said.

Trump is scheduled to visit Denmark in September, as part of a trip to Europe.

Earlier on Monday, Trump’s son Eric shared the same photo of a Trump Tower in Greenland on Instagram.

He wrote: “I don’t know about you guys but I love the concept of buying Greenland.”

In the 1/4 final of the Europa League, Bayer will play Inter, Manchester United-with Copenhagen, Wolverhampton against Sevilla, Shakhtar-Basel
Pep Guardiola: Getting children back to school is more important than spectators at stadiums
Raul Jimenez has scored 37 (27+10) points in all competitions this season. Best result in the Premier League alongside de Bruyne
Sevilla has won the Europa League or the UEFA Cup after reaching the 1/4 final on the last 5 occasions
Arsenal are laying off 55 employees, although they have persuaded the players to cut their salaries so as not to fire anyone. The team was disappointed
Miralem Pjanic: Ronaldo could be a good basketball player. He is fast and jumps high
Artur wants to personally negotiate the termination of his contract with Barcelona
Source https://www.theguardian.com/world/2019/aug/19/trump-greenland-tower