Donald Trump has at last begun the official process of transition from his administration to Joe Biden’s, but continues to make bad-faith claims about the security of the US election on Twitter.

Emily Murphy, the Trump-appointed head of the General Services Administration, said on Monday the federal government recognised Mr Biden as the “apparent winner”, while the president said he had ordered his official to cooperate with the incoming Democratic leadership.

But, though one observer said the beginning of transition appeared to be "a passing attempt at adulthood" by Mr Trump, he has continued to lie about what he claims was the most corrupt election ever. There is no evidence to support that, and his own security officials have said the opposite is true.

“We are moving full speed ahead. Will never concede to fake ballots & 'Dominion’,” Mr Trump tweeted, referring to a vote-counting system he blames for his defeat.

Meanwhile, Mr Biden and Kamala Harris are preparing to formally unveil their national security team at an event this afternoon. The roster includes Avril Haines as national intelligence director, the first woman to hold that post, and Antony Blinken as secretary of state.

Donald Trump has authorised the official transition from his administration to that of president-elect Joe Biden to begin – even while insisting against the odds that his fight to overturn the Democrats’ victory will continue.

Fours years after delivering a surprise victory over Hillary Clinton and almost three weeks after election day this year, the president announced he was ordering the government body charged with overseeing the transition process to start its work. 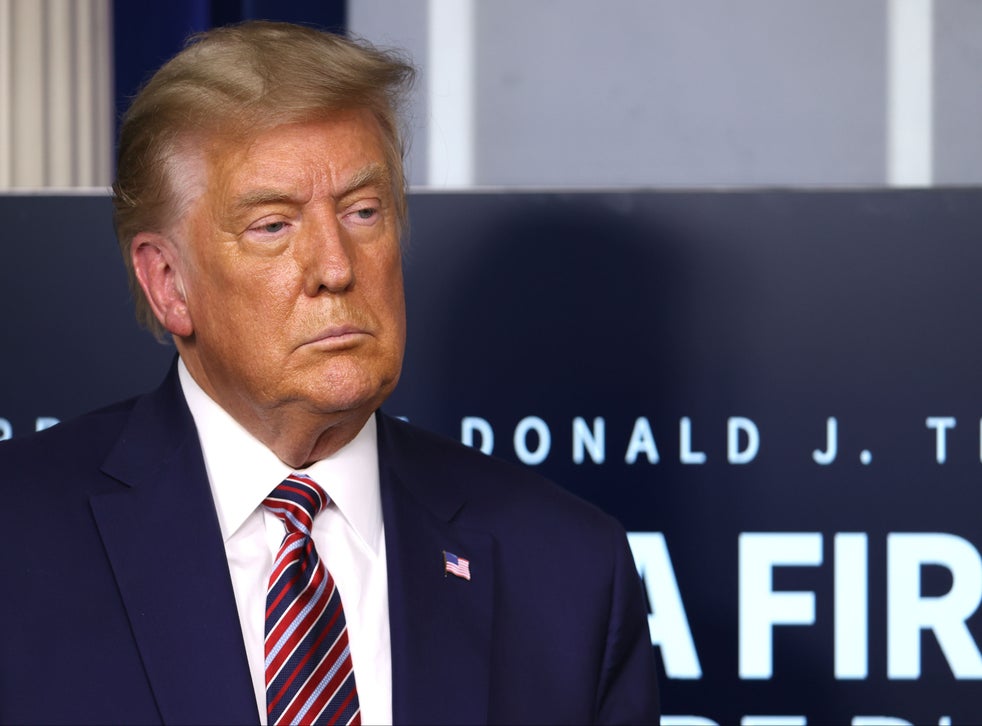 Just a few hours after announcing that the transition process would be allowed to proceed, Donald Trump has again taken to Twitter to clarify that this doesn’t mean he is giving up on fighting the election result.

‘Will never concede to fake ballots & “Dominion”’, writes president, a reference to a brand of voting machines

Donald Trump says he will continue to fight his legal battles over the election result even after accepting that the transition process must begin – but privately the president has expressed mounting concern that the legal team he has assembled are “fools… making him look bad”, according to NBC News.

President has finally admitted a transition process must begin, but still vows to continue his legal battles

In the end, the president who roared like a lion went out with a whimper. Those who have followed him knew it would end this way, writes Washington Bureau Chief John T. Bennett

Ilhan Omar and others celebrate as president finally begins transition

Congresswoman was subject of racist campaign rants by president

The president’s move to allow his administration to work with Joe Biden’s transition team was welcomed by Stacey Abrams.

Michigan governor Gretchen Whitmer has welcomed the certification of the state’s election results.

Ms Whitmer, a favourite target of Donald Trump, took to Twitter to commend the three members of the state’s Board of Canvassers who officially awarded the win to Joe Biden.

Paul Pogba: The match against Liverpool will be a battle. Manchester United need to keep calm
Roten on Mbappe: He's getting worse with his teammates. When Kylian is successful, he is like Ronaldo
Lampard 1-0 with Fulham: Chelsea pressed, and there was a feeling that we would score. It was important to be patient
Alex Ferguson: Manchester United - Liverpool-the main game of the season, I always thought so. These are two of the most successful clubs in Britain
Koeman on the Super Cup: It's not the most important trophy we're fighting for, but it's still a title. We need to show that we are in the ranks
Ferdinand is the best transfer in the history of Manchester United according to O'Shea: Ronaldo is close, but Rio is number one
Rashford on penalties: Mourinho said: If you don't know how to earn them, then nothing will be awarded. This is something you need to learn
Source https://www.independent.co.uk/news/world/americas/us-election-2020/trump-news-live-biden-cabinet-transition-election-b1760800.html