Republican who voted to impeach buying body armor amid threats

President Donald Trump is said to be planning a final trip on Air Force One to Mar-a-Lago during the inauguration, as Senate Majority Leader Mitch McConnell reportedly discusses impeachment with colleagues and the administration ends in history-making ignominy.

The president has banned all mention of the disgraced 37th commander-in-chief following an offhand comparison by an aide, a report claims, as calls grow for his removal from office through either the 25th Amendment or his conviction in a Senate impeachment trial.

Meanwhile, a separate report claimed Mr Trump had been back in touch with his former adviser Steve Bannon while increasingly isolating himself from others and as several members of his Cabinet announce their resignations.

Barry Berke and Joshua Matz are returning to the House Judiciary Committee as impeachment counsels ahead of Trump’s second trial. Both men were staffed with the Democrats during the previous trial.

Here are the other legal minds joining the team:

Bridges into DC to close ahead of inauguration

Four major bridges between Virginia and downtown Washington DC close for 48 hours leading up to and after Biden’s inauguration.

Virginia Governor Ralph Northam announced that the Roosevelt Bridge, the Arlington Memorial Bridge, the Interstate 395 Bridge and the 14th Street Bridge will close from 6am EST on 19 January to 6am on 21 January.

The plans follow other security measures around the DC area as federal law enforcement braces for threats of violence in the wake of the deadly pro-Trump insurrection at the Capitol.

Federal prosecutors believe rioters involved with a deadly insurrection at the US Capitol on 6 January intended to “capture and assassinate election officials” in Congress.

The statement is included in court documents filed by US attorneys concerning Jacob Chansley, who was seen in widely shared images from the Capitol wearing facepaint and fur clothing before reaching the dais where vice president Mike Pence sat inside the Senate. 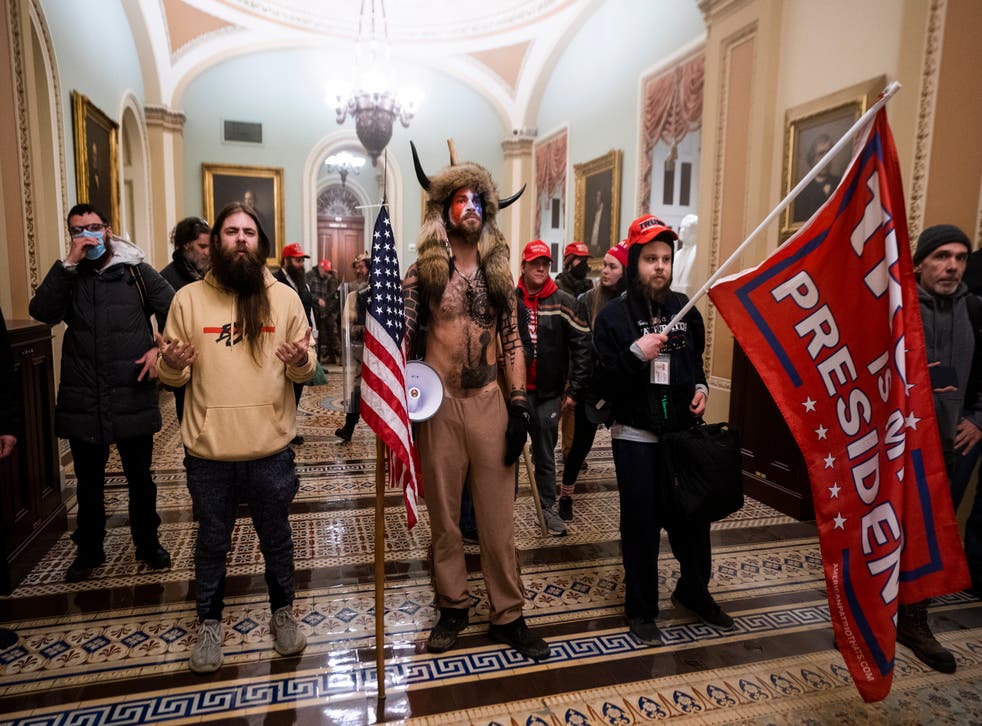 Trump die-hard and MyPillow CEO Mike Lindell – who has been central to the president’s attempts to overturn the results of the election on the big lie that the results were fraudulent – was spotted with a curious document:

Biden has pledged to deploy the US National Guard and FEMA resources to distribute Covid-19 vaccines across the US as part of a vaccine plan aimed at rapidly speeding up inoculations after a stalled rollout under Donald Trump’s administration that fell significantly short of its goals.

Joe Biden has pledged to deploy the US National Guard and FEMA resources to distribute Covid-19 vaccines across the US as part of a vaccine plan aimed at rapidly speeding up inoculations after a stalled rollout under Donald Trump’s administration that fell significantly short of its goals.

"Things will get worse before they get better. I told you I would always level with you," the president-elect said after unveiling his new COVID-19 vaccine rollout plans.

One of the president’s final guests in his last days at the White House apparently includes the “My Pillow guy,” as he has become known online -

President-elect Joe Biden will be sworn-in during an inauguration ceremony unlike any other in modern American history, as armed troops fortify the US Capitol building and security measures are ramped up in response to the deadly global pandemic and increasing fears of homegrown terrorism ahead of Inauguration Day.

Discussing the beefed up security protocols and expansive presence of National Guard troops throughout the city, Speaker Nancy Pelosi (D—CA) said Thursday the new measures had been put in place to prevent the spread of infections during the inauguration next week — as well as to ensure the safety of all participants, including President-elect Joe Biden and Vice President-elect Kamala Harris.

“If it in fact it is found that members of Congress were accomplices to this insurrection, if they aided and abetted the crime, there may have to be actions taken beyond the Congress in terms of prosecution,” the Speaker said while announcing a major security review had been launched in response to the pro-Trump riots last week.

The Senate majority leader is reportedly telling his Republican colleagues their vote on impeachment is one of ‘consciousness’ after saying himself he would consider voting to convict Donald Trump.

Bale and Kane double up in Tottenham's dismantling of Crystal Palace