Donald Trump continues to deny reality, in public at least, claiming on Twitter that “we will WIN” the election he lost to Joe Biden despite the official transition having begun.

His social media account was filled overnight with US election conspiracy claims and complaints about coronavirus and the political left. In addition, he announced he had pardoned Michael Flynn, his former national security adviser who had admitted lying to the FBI during the Russia probe.

Meanwhile, Joe Biden used a live-streamed Thanksgiving address to call for unity, telling Americans: "We need to remember we're at war with the virus, not with one another. Not with each other."

A prominent Washington lawyer defending Donald Trump’s former chief strategist against charges that he cheated donors to a southern border wall notified a judge Wednesday that he's no longer the right lawyer for the job.

William A Burck sent a letter to the trial judge in Manhattan federal court to say that he and Stephen Bannon had amicably agreed that new lawyers would be better suited to Mr Bannon's defence strategy.

That loss was the main topic he addressed, continuing to claim that “we will WIN” despite having begun the official transition to Joe Biden’s administration.

It remains unclear what Mr Trump intends to achieve by continuing to make false statements about voter fraud and “rigged” counts, in light of his order to the GSA to begin handing over power, in effect a concession.

Elsewhere Mr Trump promoted a Republican congressman who ridiculed “sustained Covid hysteria” even as cases hit record levels and deaths surged back toward their levels at the height of the first wave.

He also boosted a tweet that plugged a Fox News programme despite his many previous messages railing against the channel. The president has hailed Newsmax and the faux-news OAN as alternatives to the Murdoch-owned Fox ever since the election, when it reported that he had lost Arizona to Joe Biden.

Overall the tweet/retweet spree encapsulated what it’s like to report on the Trump presidency. Trying to figure out what is sincere and what is not, and whether that even matters, as the messages translate into real-world consequences.

Opinion: Why I won’t comfort my Trump-voting Indian American relatives when I go home for Thanksgiving

Indian Americans comprise slightly more than 1 percent of the US population, and 22 percent of them planned to vote for Trump when they were asked before the election. A number of my family members are in that small group, writes Rajpreet Heir.

Some of them just say it’s for financial reasons, that they believe in spending less and investing more — keeping government out of our hair and letting people make decisions to better themselves. That we’re at a $23 million deficit and they’re concerned about how China uses our interest payments. I’ve been told over family dinners that, “Young people want to change the world, but once you get older and tire of paying taxes, you’ll feel differently.” 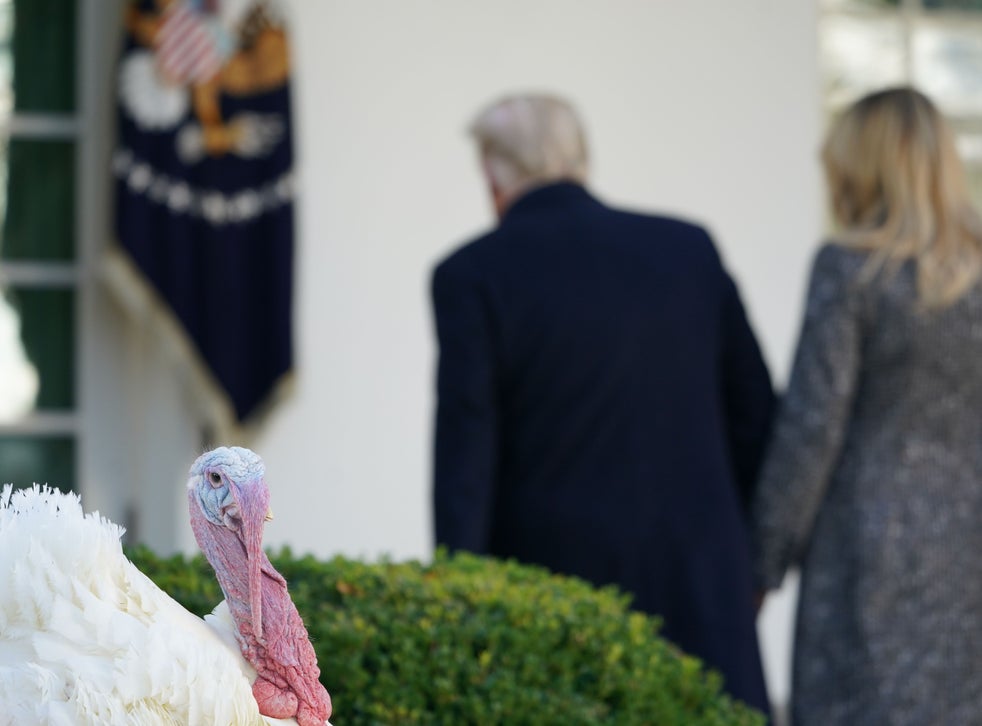 In stark contrast to the Thanksgiving message by the incoming president Joe Biden, who called for a scaling down of the celebration, outgoing president Donald Trump has called in a proclamation for Americans to “gather” for the holiday, writes Namita Singh.

The final line of the annual Thanksgiving proclamation, issued by the White House press secretary's office on Wednesday evening, read: "I encourage all Americans to gather, in homes and places of worship, to offer a prayer of thanks to God for our many blessings."

President in annual Thanksgiving proclamation 'encourages all Americans to gather, in homes and places of worship’

Mr Obama said the outgoing commander-in-chief has shown a disregard for scientific evidence and public health advice during the crisis.

The former president also criticised the White House for failing to communicate effectively with the country at the onset of the outbreak.

The Trump administration is planning to slap more economic sanctions on Iran in its final weeks.

Elliott Abrams, the US special envoy for Iran, cautioned Joe Biden against reprising the 2015 nuclear deal as he announced the plan.

Mr Biden says he wants to rejoin the JCPOA, which Mr Trump left in 2018, if Iran resumes compliance. Yesterday Hassan Rouhani, Iran’s president, said he hoped for a reset of relations with Washington to the state they were before Mr Trump was inaugurated.

Another key story to catch up on from overnight.

The president wrote on Twitter: “It is my Great Honor to announce that General Michael T. Flynn has been granted a Full Pardon.”

“Congratulations to @GenFlynn and his wonderful family, I know you will now have a truly fantastic Thanksgiving!” he continued.

Mr Trump fired General Flynn in 2017, just 24 days into his presidency, for lying to Vice President Mike Pence and the FBI about conversations he had with Russia’s ambassador.

Catch up on what you may have missed overnight

Joe Biden and Donald Trump have again offered up contrasting approaches to reality and the difficulties facing Americans as they battle coronavirus.

The incumbent spent his afternoon and evening denying that he had lost the election, stoking division and pushing false claims about vote fraud.

He sent his lawyer, Rudy Giuliani, and other members of his legal team to meet Pennsylvania Republican state senators in Gettysburg. Inside a hotel near a civil war battlefield, they again aired complaints about the election and repeated allegations of Democratic malfeasance that have already disintegrated under examination by courts.

He scarcely mentioned coronavirus, except to complain about the damaging effects of lockdowns, despite cases and deaths surging.

Meanwhile, Mr Biden put the surging pandemic front and centre in a Thanksgiving-eve address, pledging to tap the “vast powers” of the federal government and to “change the course of the disease” once in office. But for that to work, he said, Americans must step up for their own safety and that of their fellow citizens.

“I know the country has grown weary of the fight,” Mr Biden said on Wednesday. "We need to remember we're at war with the virus, not with one another. Not with each other.”

Brother Chalova moved to the Serbian Subotica
Barcelona will not sign Garcia in the winter due to financial problems
Rodgers on the draw with Everton: It was unlucky that Leicester did not score the second goal
Ancelotti on 1-1 with Leicester: I don't remember Hames scoring with a right before
Andrea Pirlo: In my 1st season at Juve, we were behind Milan, but we took the title. Everything depends on us
The judge made two mistakes. De Gea was pushed and there was no foul on our cancelled-out goal. Solskjaer on the loss to Sheffield
Maguire on the defeat to Sheffield Wednesday: We gave the opponent two goals, we didn't play at the level we expected
Source https://www.independent.co.uk/news/world/americas/us-election-2020/trump-news-live-twitter-biden-election-pardon-b1762113.html