A trio of adorable endangered Amur tiger cubs recently born at a popular Scottish wildlife park have been given names by staff.

Staff at the Royal Zoological Society of Scotland's Highland Wildlife Park have revealed what the newest arrivals will now be called after they were given regular outdoor access for the first time.

The two girls and a boy, who were born in May to mum Dominika and dad Botzman at the park, near Aviemore, have been called Nishka, Layla and Aleksander in tribute to the species' native home of Russia just in time for International Tiger Day (Thursday, July 29). The female cubs were named by two of the wildlife conservation charity’s donors, Nishka meaning precious jewel and Layla meaning night, while the male cub was named Aleksander after a public vote in tribute to one of the park’s keepers who shares a birthday with the triplets.

Following their first health check and vaccinations last week, the three cubs have now been given regular outdoor access, meaning lucky visitors could spot the triplets starting to explore. One of the cute cubs explores its new surroundings (Image: RZSS)

They had previously been spending most of their time in the cubbing den with mum Dominika, with dad Botzman set to be gradually introduced to them as they grow older.

As well as being part of the endangered species breeding programme for Amur tigers, with Dominika giving birth to a previous litter in 2013, the charity has supported tiger conservation in Nepal by developing methods to evaluate tiger diets within the RZSS WildGenes laboratory based at Edinburgh Zoo.

It's been a hugely successful process for the park, with new arrival Botzman, who only came to the park near Aviemore in October, quickly becoming smitten with resident female Dominika after the pair were introduced in February this year. 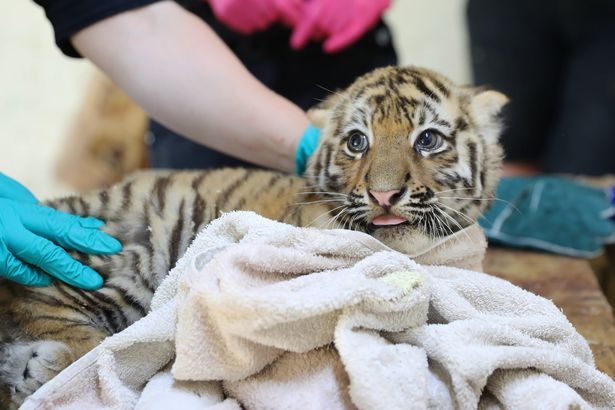 The little trio recently had their first check up (Image: RZSS)

“We are so grateful for the support we have had from the public throughout this incredibly challenging year for our charity. If restrictions continue to ease, we are on track to have one of our best summers yet.

“Our visitor numbers are still limited for everyone’s safety, so I would like to remind everyone to check online and book ahead to avoid disappointment.”

Anyone planning to visit Highland Wildlife Park must book tickets in advance at highlandwildlifepark.org.uk/we-are-open as visitor numbers are still limited for everyone’s safety.