Tory MP made to publicly apologise for ‘threatening and intimidating’ colleagues

A Conservative MP has been forced to apologise for bullying parliamentary committee members over technical issues during a video call meeting.

Daniel Kawczynski, 49, has been slammed for being ‘repeatedly rude, aggressive and impatient’ with colleagues. He was ‘threatening and intimidating’ to people before, during and after a meeting on April 27 last year.

Although he did not swear at anyone, one of the complainants said they were told ‘this is a farce’ and ‘you are useless’.

Mr Kawczynski then called the complainant part of the ‘snowflake generation’.

After a 15-month investigation, the Independent Expert Panel (IEP), which makes decisions on bullying cases, asked the Shrewsbury and Atcham MP to publicly apologise.

Speaking in the Commons today, Mr Kawczynski said: ‘I did not swear nor raise my voice but my behaviour led to two complaints. I have reflected on my behaviour, I accept it constituted bullying and as such was highly inexcusable.

‘The circumstances were stressful for the staff who were assisting the committee and for me. 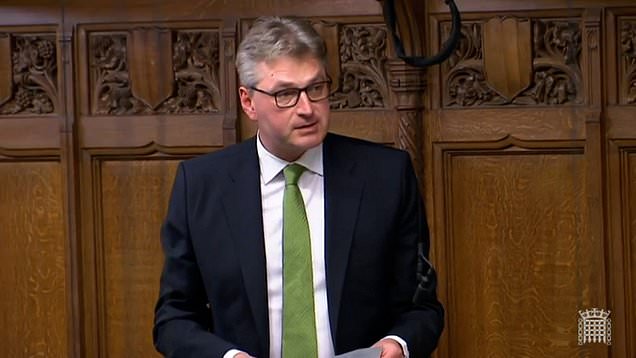 ‘I’ve apologised to them before and I apologise to them again and to the House unreservedly. I will never repeat such behaviour.’

But before this, Mr Kawczynski told BBC Radio Shropshire he had ‘no alternative but to apologise’ and would do so to make sure he is not suspended from the House of Commons.

The IEP took into consideration the ‘great pressure’ Mr Kawczynski was under at the time – when the pandemic first hit the UK and everyone was still adjusting to remote working.

On top of the pandemic, Mr Kawczynski was dealing with Brexit and ‘serious flooding in his constituency’.

He also told the IEP that being so tall (6′ 9”) had made things even more difficult for him. The Brexiteer’s height made him very recognisable in his local areas and he ‘found himself under repeated attack by members of the public’.

The panel said: ‘Against that background, the advent of the pandemic added another layer of pressure.

‘It was in that context that his frustration with the technical problems associated with a remote meeting caused him to be so angry.

Sir Stephen went on: ‘Whilst we fully grasp that the life of an MP can be highly pressurised, these responsibilities and stresses do not justify a loss of courtesy, an exaggerated sense of importance or entitlement, or bullying.

‘Our conclusion is that the determination of a requirement to make a public apology on the floor of the House is proper and proportionate.’