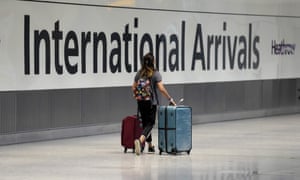 A passenger arrives from a flight at Terminal 5 of Heathrow Airport in London. Photograph: Matt Dunham/AP

The UK’s aviation regulator is curbing Heathrow’s bid to sharply raise passenger charges, as the country’s busiest airport tried to recover from the economic shock of the pandemic.

The Civil Aviation Authority has proposed this morning that Heathrow could raise its price per passenger to between £24.50 and £34.40 over the next five years.

The range is planned to come in effect from summer 2022, with an interim cap of £30 being introduced at the beginning of the year.

Previously the charge was set at £22, so this is still a significant increase - which will ultimately be paid by passengers as airlines add the cost to the price of tickets.

But, Heathrow has been pushing for the cap be set at between £32 and £43 per passenger, as it looks to rebound from the plunge in revenues during the pandemic.

That move, though, was opposed by airlines who didn’t want to face raising ticket prices to cover higher airport charges, as they also try to recover from Covid-19.

The CAA said its proposals, which will be finalised next year, struck the right balance between consumer interests and the airport.

“While international air travel is still recovering, setting a price control for Heathrow Airport against the backdrop of so much uncertainty means we have had to adapt our approach.

Our principal objective is to further the interests of consumers while recognising the challenges the industry has faced throughout the Covid-19 pandemic. These initial proposals seek to protect consumers against unfair charges, and will allow Heathrow to continue to appropriately invest in keeping the airport resilient, efficient and one that provides a good experience for passengers.

Our role as a regulator is to protect consumers. In doing that we set the maximum amount Heathrow Airport can charge airlines to use the airport, which is then included in airline ticket prices.

We are currently consulting on what the charge will be for the next five years. pic.twitter.com/mtV1rwETET

Everton pair argue as frustrations threaten to boil over at Brentford

The Welsh park named one of the best in the UK

Some of your pictures from a weekend of snow in Staffordshire

All the pictures from Rugeley Christmas lights switch-on