TikTok has been urged to take action over a flood of videos shared in Myanmar that feature men in military uniform threatening to kill anti-coup protesters, at times while brandishing weapons.

Myanmar’s police and army have been widely condemned for using lethal force against peaceful protesters who have held mass rallies over recent weeks calling for the return of democracy. More than 20 people have been killed since the military seized power on 1 February.

While officers have repeatedly used force to try to crush protests, men dressed in army and police uniform are using TikTok to threaten the public, despite the Chinese-owned social media app’s guidelines forbidding incitement of violence.

In one video, a man in a face mask and full military fatigues calls supporters of the ousted democratic leader, Aung San Suu Kyi, the “motherfucking reds”, referring to the colour of her party, the National League for Democracy (NLD), and warns: “Don’t touch General Min Aung Hlaing ... It will cost you your life. Hear? You will die.”

The video was posted on 13 February and has been viewed more than 180,000 times. It remained online as of Wednesday morning.

Other videos are more explicit. The user Yekoko119 threatened on 27 February to shoot and throw grenades at NLD supporters, whom he described as “motherfuckers” who “gather in groups to bark” and “can all die”.

Htaike Htaike Aung, the executive director at Myanmar ICT for Development Organization, a Yangon-based digital rights group, said she had seen more than 800 pro-military videos over recent weeks that featured a song threatening protesters. The song adapts the words of a popular protest chant – “the military tactics given by Aung San are not to be used to kill the people” – altering the lyrics to state that the military can shoot people. Gen Aung San, the father of Aung San Suu Kyi, founded the military and helped win the country its independence. 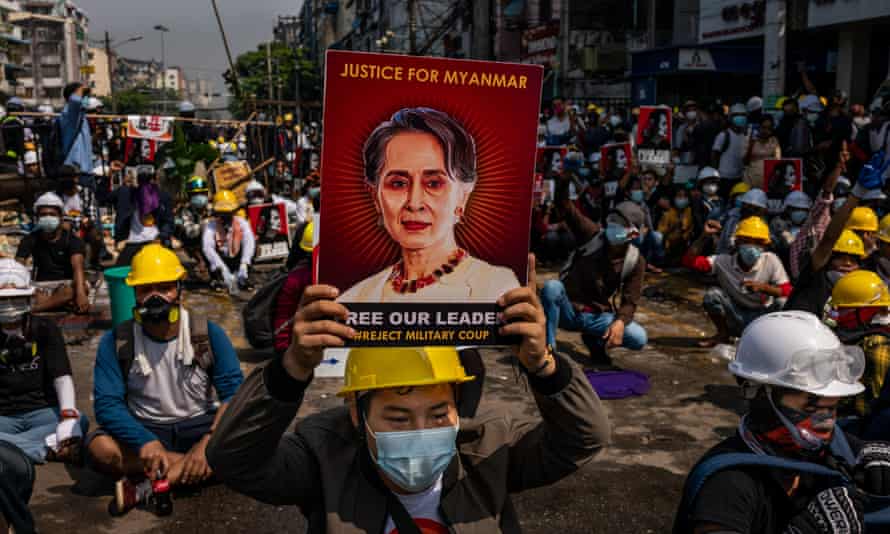 An anti-coup protester holds up a placard bearing an image of Aung San Suu Kyi in Yangon on Tuesday. Photograph: Hkun Lat/Getty Images

The song, which was available in the TikTok sound library, has since been removed, and the associated videos have also disappeared, though it is not clear whether or not it was taken down by app’s moderation team. “This particular soundtrack is just the tip of the iceberg,” added Htaike Htaike Aung.

One video seen by the Guardian, posted by a user with the account name Ye Ye, features a man dressed in fatigues and holding a gun, with another soldier in the background. “It’s not a game where you can get healed after being shot. This is a polite warning to the protesters. Be careful, whatever you do,” he tells viewers. The video, posted on 21 February, has so far received 37,200 views.

In another clip, since deleted, the user ronaloo3 says soldiers will “chase the dogs” at 8pm, referring to the time pro-democracy supporters bang their pots and pans in protest against the coup. Loading his automatic weapon, he adds: “Don’t like it?”

Many of the soldiers use the hashtags #lilhuddy and #addisonre, the names of the American TikTok celebrities Chase Hudson and Addison Rae, in an attempt to attract more views.

It is not clear if soldiers have been ordered to post such videos.

The Chinese-owned TikTok, which has 800 million users worldwide, has become increasingly popular in Myanmar over the past year, especially among young people.

Wai Wai Nu, the founder of the Women’s Peace Network, said the app was giving a free pass to the military. “Our question now is are we going to let this social media company [allow] the military and criminals to be able to manipulate agendas and organise activities to threaten public safety and security?”

Htaike Htaike Aung said TikTok must improve the process of reporting content that violated its guidelines and set up a dedicated Myanmar team. She also recommended further steps be taken to prevent the platform from being misused, such as employing third-party factcheckers.

In a statement, TikTok said it was committed to promoting “a safe and welcoming app environment for our community.”.

“We have clear community guidelines that state we do not allow content that incites violence or misinformation that causes harm to individuals, our community, or the larger public. TikTok will continue to follow these principles globally, including around issues like election results,” the company said.

Facebook, which has long been criticised for failing to stop hate speech and disinformation from being spread on its platform in Myanmar, recently banned official military accounts. The junta had blocked the social network in the aftermath of the coup as it sought to prevent people from organising protests, but many got around the restrictions by downloading VPNs and the army had continued to use the site to share its announcements.

Since the coup, the military has clamped down on independent media and ratcheted up its propaganda efforts. State news barely acknowledges the protests that are gripping the country, only doing so to wrongfully accuse protesters of violence or threaten action against people who are participating in a national strike.

Journalists have been assaulted and detained by the authorities. On Wednesday it was announced that six media workers had been charged for covering the coup, under a law against “causing fear, spreading false news or agitating directly or indirectly a government employee”. The group includes journalists for Associated Press, Myanmar Now, Myanmar Photo Agency, 7Day News, Zee Kwet online news and a freelancer. They could face up to three years in jail.