TIGER Woods was driving downhill when he crossed a median and overturned in shrubs before being pulled from his car's windshield.

Police did not administer a sobriety test to the star golf player, who was apparently conscious after the crash early Tuesday morning in Los Angeles.

Woods was driving on a downhill road when he crashed into a median and his car flipped over into some shrubbery.

However, the Los Angeles Sheriff's Office apparently did not administer a sobriety test on the award-winning golfer as there was no reason to, considering the speed he was potentially going and his injuries were non-life-threatening.

"After all of that, the interior was more or less intact which kind of gave him the cushion to survive which otherwise would have been a fatal crash," Villanueva said.

The 45-year-old was driving in Los Angeles when he struck the median and flipped over just after 7AM Tuesday morning.

Law enforcement sources told the Los Angeles Times that Woods was "speeding" at the time of his crash.

They added because of the high rate of speed he was traveling at, he lost control of his car before crossing the center divider.

The LA Sheriff's Office confirmed Woods was driving the car, with a neighbor saying Woods was trapped "off the side of the road" according to a 911 dispatch call, obtained by The Sun.

Woods was driving a Genesis GV80, the car the golf tournament he played in this weekend was promoting.

The Sheriff's Office said his car flipped over several times before coming to a halt. The airbags were also deployed.

This is the third car crash Woods has been a part of.

His most infamous one was the day after Thanksgiving Day when he over a fire hydrant and into a tree. 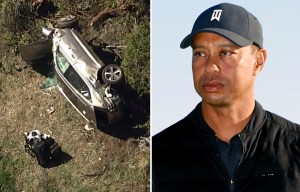 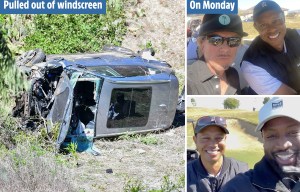 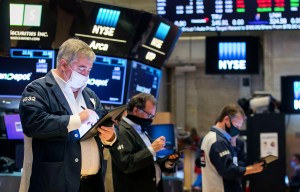 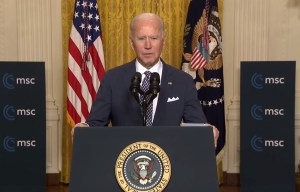 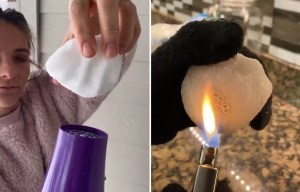 That's when revelations surfaced of the golfer cheating on his wife, whom he shared a child with.

The star's agent, Mark Steinberg, said in a statement: "Tiger Woods was in a single-car accident this morning in California where he suffered multiple leg injuries.

"He is currently in surgery and we thank you for your privacy and support."

Follow our Tiger Woods live blog for all the latest news and stories...

Meghan 'saddened' by bullying claim during her time at palace

Prince Harry begged his press officer to stop pursuing claims of bullying by Meghan Markle, it is alleged

Contactless payment limit to be increased to £100

Tributes to 'iconic' woman who fought for Windrush generation

Coronavirus kills 17-year-old who had no underlying health conditions

Loving husband overjoyed after being able to visit his wife again

Ulrika Jonsson, 53, reveals she’s excited to ‘get drunk and have sex with strangers’ once lockdown ends

Who was Jery Hewitt and what was his cause of death?

Elliot Anderson on the messages of support from Allan Saint-Maximin

TikTok’s Color Personality Test: How to take it and what is your color?

Who is Jason Knauf and what has he accused Meghan Markle of?