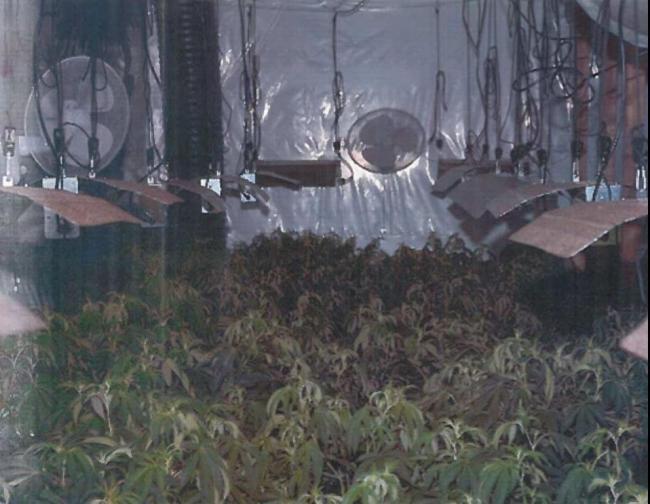 Some of the plants seized from the premises at Apex Trading Estate in Lower Eccleshill, Darwen

THREE men have pleaded guilty to producing cannabis following the discovery of an estimated £4million drugs farm in Darwen.

Jacek Pieczur, 24, Aurel Gjuzi, 24 and Sulejman Lloni, 31, all of no fixed address, pleaded guilty to the offence when they appeared in the dock at Preston Crown Court.

Gjuzi and Sulejman, who are Albanian nationals, and Pieczur, who is Polish, entered their pleas with the assistance of interpreters.

The charges came after police raided industrial premises on the Apex Trading Estate in Lower Eccleshill on October 8.

An estimated 8,000 to 10,000 plants, which would have an estimated street value of between around £3.2million and £4million, were recovered.

Large amounts of electrical equipment and sleeping bags were also found within the unit.

Heaters, lamps and temperature gauges seized have been donated to Blackpool Zoo to help with the care of exotic animals and insects.

They are now in use in various reptile enclosures and aquariums across the zoo and will help to promote natural behaviours in the animals and encourage plant growth.

Speaking at the time of the raid, a police spokesman said: “This is believed to be the biggest ever cannabis farm found in Lancashire.

“We will continue to target those taking part in this illegal activity and will act on information passed to us to disrupt and ultimately prevent those involved in the drugs trade from operating on our streets.

“Cannabis can have lasting physical and mental health effects on users as well as having a negative effect on our communities and fuelling other crime and we are determined to tackle that.”

Prosecuting, Hanifa Patel asked Judge Robert Altham for an adjournment so the Crown Prosecution Service could consider the defendants’ basis of pleas, the police could finish examining mobile phone evidence and come up with a final valuation for the cannabis plants.

She said: “We are not in a position to say whether we accept the basis of pleas today. Your honour may have seen my note which identifies the fact the phone evidence is yet to be analysed. It’s taking longer than expected because of the language the messages are sent in.”

Defending Lloni, Jane Dagnall said: “He accepts he was involved in cleaning up some harvested cannabis plants.”

The defendants were remanded in custody until December 2.

Kike Setien: Barcelona didn't play a great match. Espanyol played well in defense
Andujar Oliver on deletions: Fati went too far in the foot, and the foul on the Peak was even more dangerous, perhaps
Atalanta extended the winning streak to 11 matches, beating Sampdoria-2:0
Milner played his 536th game in the Premier League and was ranked in the top 5 of the League in games played
Barca midfielder Fati is removed in the Derby with Espanyol. He spent 5 minutes on the field
Suarez scored 195 goals for Barcelona and finished third in the club's top scorer list
Daniele de Rossi: People call Messi cowardly, but they are afraid to ask their wives for a remote control from the TV
Source https://www.lancashiretelegraph.co.uk/news/18035865.three-plead-guilty-4million-darwen-cannabis-farm/?ref=rss