In southern California’s Imperial county, the chuff-chuff of spinning helicopter blades has become a familiar noise.

It’s the sound of coronavirus patients being airlifted out – 15 to 17 a day, on average. This remote region along the US-Mexico border is under siege from Covid-19, and hospitals are stretched to the brink.

Adolphe Edward, the CEO for El Centro regional medical center, one of only two hospitals in the county, is reminded of medical operations he has overseen in Turkey, Oman and United Arab Emirates. More than 500 patients have already been transported out of the county to other medical facilities, and still the cases keep coming.

‘If there was a poster of a place where Covid thrives, this is it’

But in many ways it is also a microcosm of the pandemic’s toll on communities of color across the state and nation. 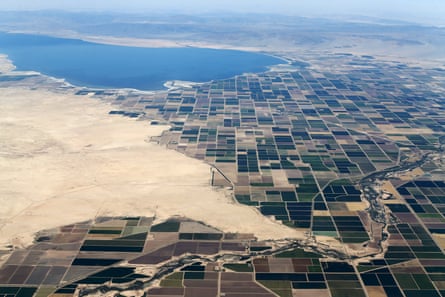 Not only has coronavirus infected a disproportionately high number of residents, Imperial county is also the state’s poorest. In 2018, 30% of its children lived in poverty, soaring above state and national averages. It comes in dead last on a ranking of county health indicators, which include rates of obesity, access to healthcare, and environmental pollution.

For years, children in Imperial county have suffered alarmingly high rates of childhood asthma, a factor researchers believe could be connected to pollution and harmful, dust-blown particles released by an evaporating Salton Sea.

Luis Olmedo, executive director of Comite Civico del Valle, a non-profit that has been monitoring air quality and pushing the state to address it, said that taken together these factors make the county a Petri dish for disease.

“We’re in the middle of a pandemic, but we’ve been dealing with epidemics of cancer, asthma, and diabetes for a long time. If there was a poster of a place where Covid thrives, this is it,” said Olmedo.

Medical professionals treating patients in Imperial county say they are not surprised to see coronavirus disproportionately affect a community dealing with underlying risk factors of poverty and chronic illness.

“We see so many patients with diabetes, asthma, cancer and obesity. This type of co-morbidity compromises health, and by the time you run into Covid, this virus that wants to take you down, it becomes much harder to combat,” Edward said.

The doctor said the medical center saw its first case in early March, and by the first week of April cases began to soar. Since May, they have seen a steady flow of 50 to 60 Covid-19-positive patients a day. Medical staff have witnessed at least 26 patients rapidly deteriorate and die within 10 to 15 minutes, Edward said. Patients in need of higher care levels have been transported as far away as San Francisco, 600 miles north.

Equipment and PPE shortages are also a major problem, Edward said. El Centro’s medical center has requested 10 additional ventilators from the state to meet demand. “Every county is holding on to every asset they have in case they get a spike,” he said.

Many in Imperial county have theories about what lies behind the deadly surge. Edward believes residents could be getting infected while visiting nearby Arizona or San Diego, where bars and businesses have reopened. 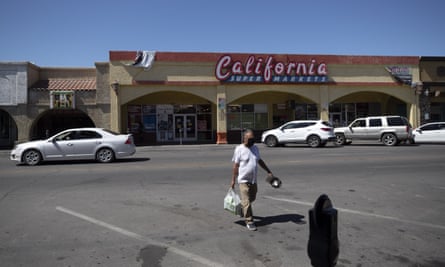 The remote region has been grappling with a surge in cases, and hospitals are struggling to cope. Photograph: Gregory Bull/AP

Blanca Morales, the CEO of the Calexico Wellness Center, a small community clinic, said the county’s proximity to Mexicali – a metropolitan area of more a million on the Mexican side of the border that has been overwhelmed by its own war on Covid – also probably plays a role.

“We see many patients with family in Mexicali,” she said. “They come here and they visit family, many of them living in multigenerational homes, and then we see more cases.”

While public health officials have not tied case numbers to outbreaks at specific locations, Luis Flores, a Calexico resident and activist with the Imperial Valley Equity and Justice Coalition, said that many infections had happened among farm workers who legally cross the border each day to work in the fields.

“The folks who cross every day, they’re our essential workers, but there are a large number of risks. These are people who wait in line to cross the border, then get on a cramped bus without PPE and ride an hour to the field site,” Flores said. 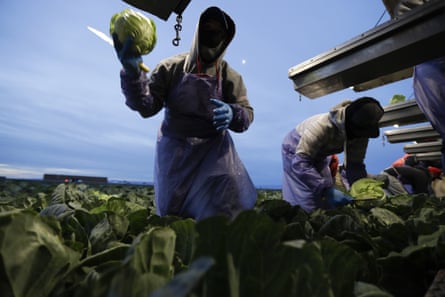 Farm workers pick cabbage before dawn in a field outside of Calexico. Photograph: Gregory Bull/AP

Flores said he and his organization had called on county officials to enforce safety guidelines for employers.

“We’re hearing stories of bus drivers and field supervisors dying. There’s an element of exploitation in this labor market that is also expressing itself in unsafe worker conditions,” Flores said.

Imperial county’s public health department confirmed that the county has seen cases among individuals working in retail settings, including Walmart, as well as among farm workers and people who are not currently employed, such as retirees, disabled residents and children.

‘Toggling back’ on reopening

The crisis in Imperial county has highlighted the challenges of reopening California, particularly in a hard-hit region where people are desperate to get back to work.

In late June, as the county was poised to reopen more businesses, California’s governor, Gavin Newsom, ordered Imperial county to “toggle back” its plans amid surging cases, a move that Flores and Equity and Justice Coalition supported.

County plans that allowed for in-store retail and indoor religious services were also walked back after the governor threatened to “intervene” if the county did not follow guidance.

The business community, however, pushed back, with the Imperial Valley Business Recovery Task Force calling Newsom’s announcement “a devastating turn of events for our businesses who have worked hard over the last several months to implement proper safety precautions for a safe working environment”.

Luis Plancarte, the chairman of Imperial county’s board of supervisors, said the urge to reopen was especially strong from employees who found themselves out of work due to lockdowns.

“The pressure came from dishwashers, servers, busboys within the restaurant industry. From retail and hospitality workers. From people who were out of work and already spent their $1,200 stimulus checks and said ‘we’re running out of money and we need to do something’,” Plancarte said.

Unemployment in the county currently stands at nearly 30%, he added.

Meanwhile, the ACLU of San Diego and Imperial Counties has pushed county supervisors to collect and publish additional information on those who have been infected – data on gender, primary language, health insurance coverage and whether they are “essential workers” – with the hopes of gathering knowledge that can help the county fight back.

“If we’re going to be serious about tackling this pandemic, we have to have as much information as possible,” said David Trujillo, advocacy director for the ACLU of San Diego and Imperial Counties.

Bordeaux appointed ex-assistant Blanc Gasse as head coach
Sterling on the win over Real Madrid: Manchester City were incredibly hungry. We have the strength to succeed in the Champions League
Galliani about Pirlo in Juve: Andrea was laughing like a madman when I called to congratulate him
Villarreal will pay no more than 20 million euros for Valencia captain Parejo and midfielder Coquelin
Thomas Tuchel: Atalanta has a completely unique style. PSG will be difficult not to miss
Mancini on Pirlo: he was lucky. I started my career with Fiorentina, not Juve
Rio Ferdinand: Winning the Europa League can create a new culture at Manchester United
Source https://www.theguardian.com/us-news/2020/jul/13/coronavirus-imperial-county-california-latino

End of the world: 'We are living on borrowed time' latest apocalypse prediction claims