There are growing hopes that hospital admissions may have peaked in the UK’s third wave of coronavirus.

A total of 593 admissions were recorded in England on July 31 – down 19% on the previous week, and the lowest daily number since July 16, NHS figures suggest.

However, Tuesday’s case figures – which tend to be noticeably higher than those at the weekend because of a lag in reporting – will give another indication of the direction of the pandemic.

It has been just over two weeks since ‘Freedom Day’ in England, which means any uptick in Covid-19 cases and hospitalisations as a result of relaxing restrictions entirely is only likely to emerge now.

But the seven-day average for England’s hospital admissions has also started to decrease, falling four days in a row from 793 on July 27 to 744 on July 31.

The figures are the first sign the recent drop in new infections could be having an impact on hospital numbers.

Any change in the level of new reported cases of coronavirus typically takes a while to show up in hospital data, due to the length of time between someone testing positive for Covid-19 and then becoming ill enough to go to hospital.

Medics will be hoping that the emerging data becomes a trend, with the NHS still under huge strain and nurses and doctors pleading for caution.

Though hospital admissions appear to have plateaued, the number of people in hospital with the virus is continuing to rise – though the rate of increase is slowing down.

A total of 5,309 people were in hospital in England with Covid-19 on August 2, up 5% on the previous week – the smallest week-on-week rise for nearly two months.

The University of East Anglia’s Professor Paul Hunter said: ‘The fact that hospital admissions are now falling provides further evidence that the decline in cases in the last couple of weeks was real and not due to an artefact from changing testing or people deleting the NHS Covid app, as some have suggested.

‘As yet the number of people in hospital with Covid-19 has not peaked, though it is clearly plateauing, and we can expect to start seeing this fall in the next few days.’

He added: ‘It will take another week or so before we see any impact on reported deaths.’

In the UK, where the most recent figures are for July 30, the number in hospital has remained roughly stabled at around the 6,000 mark for four days, but the number is still significantly above what it was a week ago.

The average number of deaths reported each day of people in the UK who died within 28 days of testing positive for Covid-19 currently stands at 76.

Meanwhile the average number of new reported cases of coronavirus in the UK stood at 26,364 on August 2: down 27% on the previous week and the lowest since July 5, Government figures show. 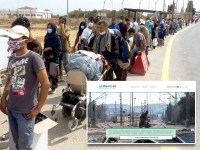 Elsewhere, Jamie Jenkins, the former head of health statistics at the Office for National Statistics, suggested that the nation could be ‘over the edge’ of the third wave.

‘I think looking at the data, we normally see deaths peaking around 14 days after cases come down, I think we might start being over the hill now when it comes to deaths.’

Mr Jenkins added: ‘We probably are over the edge of the wave at the moment but let’s have a bit of caution as we go into the autumn period.’

He said that hospital admissions were around 80% lower than what they would have been in the past and deaths were 90% lower, adding: ‘The vaccine effect has kicked in as well – if you look at the same number of cases to what we had in the winter, it would have been 800 deaths rather than 65-70.’

MORE : NHS Covid app to be modified so fewer people are told to isolate

If Mbappe has any quality, it is modesty. Pochettino on the words of coach Metz about Kilian
Xavi will not negotiate with Barcelona until Koeman is sacked. He does not want to betray Ronald
Werner signed a preliminary contract with Bayern in 2019, but canceled the transfer after learning that Kovac and Salihamidzic were against his transfer
Carlo Ancelotti: Benzema has time to take the Golden Ball. He is like wine - the older, the better
Ronaldo's mother wants her son to return to Sporting. They adore Cristiano - and have already named an academy in his honor
Kepa deflected 7 shots in penalty shootouts for Chelsea, breaking the Czech record
Koeman will not be able to manage Barca in the matches with Atletico and Levante - he was disqualified for red in the game with Cadiz

Boy, 3, died after being run over by a tractor as he played outside rural home