After the news in November of the successful trials of the Pfizer-BioNTech Covid vaccine, a curious photo spread online. It showed a Turkish immigrant family of six in Germany in the 1970s. The father stood in the middle, arms stretched around his head-scarfed wife and children. A shoeless boy hung off to the side, his yellow T-shirt tucked into impossibly high and baggy black trousers. Users of every conceivable social media platform shared this image with an addendum: that scrawny, barefoot boy would one day grow up to be Uğur Şahin, a co-founder of the German pharmaceutical firm, BioNTech, that pioneered the vaccine. This humble, hopeful family would help save the world.

The photograph proved to be of another family altogether (it depicted neither Şahin nor his relatives), but it remained happily viral, buoyed up by the feelgood story of the vaccine’s development. The husband-and-wife founders of BioNTech – Şahin and Özlem Türeci – came from Turkish families that moved to Germany. Media outlets championed the couple’s background as if their achievement was not just scientific but also moral, a vindication of the immigrant experience. An article in the Guardian insisted that “BioNTech’s Covid vaccine is a triumph of innovation and immigration”. “Here’s to the immigrant heroes behind the BioNTech vaccine,” cheered Bllomberg. “Like Covid-19 vaccines?” asked the libertarian Reason magazine. “Thank globalisation!”

There is nothing wrong, of course, in celebrating the contributions of immigrants, especially in Europe and North America. Immigrants have long served as punchbags in the electoral politics of the west, vilified as criminals, blamed unjustly for stagnant wages, and at times conjured into a menace of apocalyptic proportions – a familiar motif of the Brexit years in the United Kingdom and Donald Trump’s presidency in the United States. In the face of such xenophobia and vituperative nationalism, the success of immigrants tells another story, of how societies gain from the arrival and the striving of people from elsewhere. 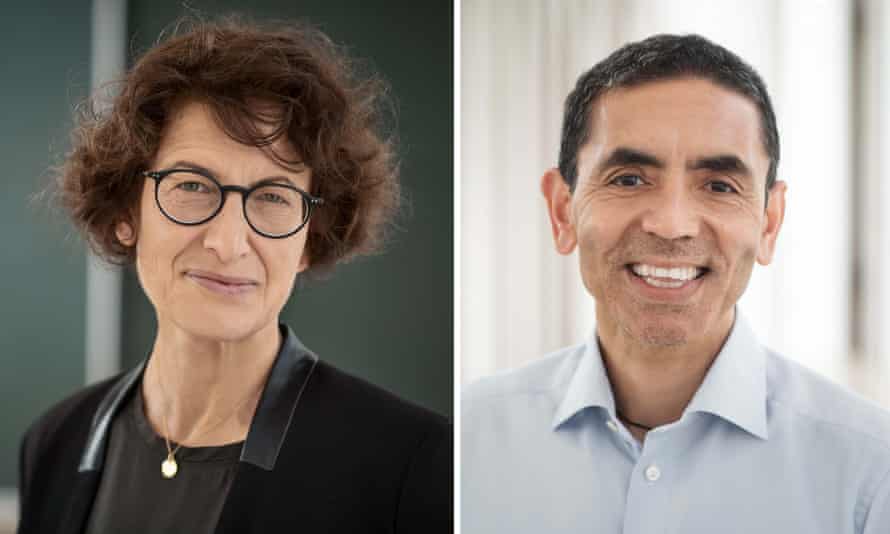 The optimistic globalism of some of these articles, however, obscured the more telling dynamic in the making of the Pfizer-BioNTech and Moderna vaccines – that the traffic went mostly one way. Wealthy countries gained immensely from absorbing the talents and ambitions of those from immigrant families such as Şahin and Türeci (as well as many of the team at Moderna). But it became clear soon after the news of their trials that these vaccines would only reach a fraction of the world’s population in the near future. Like much else in the pandemic, nationalism and the bottom line punctured loftier notions of global interdependence and solidarity.

By December, wealthy countries that accounted for 14% of the world’s population had already bought up more than half the supply of the leading vaccine candidates. The contours of global vaccine inequity have only grown starker in the subsequent months. As vaccines roll out fairly swiftly in the UK, US and parts of Europe, not a single dose had been administered in 130 poorer countries by mid-February. The Economist Intelligence Unit estimates that more than 85 poor countries will not see widespread immunisation until 2023.

There are numerous ways to address the imbalance, but depressingly little political will to do so. Wealthy countries in Europe and North America in February rejected a proposal at the World Trade Organization (WTO) that would have allowed manufacturers in developing countries access to the intellectual property underlying these vaccines, thereby speeding the production of more affordable doses for broader distribution. The director-general of the World Health Organization (WHO) lamented this decision. The Covax facility, a mechanism set up by the WHO to help get vaccines to poor countries, is woefully behind schedule and unlikely to meet its goal of delivering 1.8bn doses this year. Vaccine inequity will prolong the pandemic and potentially lead to the emergence of new variants of the disease. And if human lives weren’t valuable enough, one academic study suggests it will cost the global economy as much as $9tn.

Covid has had the strange function of uniting the world in the shared grip of the pandemic while reinforcing existing divisions, reminding people just how much their lives are determined by the randomness of nationality. In a February interview with the Financial Times, the French president, Emmanuel Macron, acknowledged that wealthy countries had to do more. “We are allowing the idea to take hold that hundreds of millions of vaccines are being given in rich countries and that we are not starting in poor countries,” he said. He has proposed that EU member states transfer 5% of their vaccine doses to poorer countries, a modest measure that would signal virtue more than intent. “It’s unacceptable, when a vaccine exists, to reduce the chances of a woman or a man according to the place where they happen to live,” he said.

It may be unacceptable, but it is almost certainly inevitable. Current political structures and relationships do little to close the gap between the west and the rest. Emigration – the route taken by Şahin and Türeci’s parents – remains the best way to circumvent the arbitrariness of place, to take advantage of what economists call “the place premium”, which measures just how much more a worker in one country might earn than a worker with equivalent skills and training in another country. The apocryphal photo of Şahin’s family became popular because people wanted to believe in immigrant aspiration as a great equalising force. But, much like the photo, that equality is only a mirage.

Biden says US has enough vaccine for ‘every single, solitary American’ – live

Jurassic Coast has its biggest rockfall in 60 years after huge 4,000 tonne chunk drops from 430ft cliff