Spoiler alert: this blog is published after The Mandalorian airs on Disney+. Do not read unless you have watched season two, episode six

For some reason, children have an obsession with being treated as adults. Blithely unaware that adulthood is actually an unceasing stream of obligation and compromise, these children think it’s cool. “Stop treating me like a child,” they say. “I want to make my own decisions.” OK then, fine. Let’s lock you in a cell on an Imperial cruiser and see how you like it.

The title of this week’s bracingly brief episode is The Tragedy, and the only thing I can think that it refers to is the demise of the Razor Crest, blown up by a laser. It’s been a loyal ship to Din Djarin – and, boy, did the knob on that gear stick get a lot of use – but let’s face it, it should have been scrapped for parts some time ago.

There’s also the fact that Grogu gets captured by Moff Gideon. The little green so-and-so is now on his way to Dr Pershing where he will be used as a “donor” and not, one suspects, a donor of Jedi plasma to the sick kids of Hoth. It’s looking perilous for the little lad. But a tragedy? Not yet.

Grogu might be in exactly the place Mando has been trying to keep him away from, a place with Breaking Baddies and darksabers and dark troopers (he really does love his dark, this Moff). But he’s also a creature with powers beyond anything previously thought. The Imperial remnants might be able to contain him for now, but there’s no guarantee that will continue.

What’s more, our bounty-hunting hero is in the process of building a posse of elite ability to bring Grogu back to safety. First among them is Boba Fett, the legendary hunter reunited with his armour and – as a consequence – bound to Din Djarin’s quest to protect the kid. Boba gets good opportunity to strut his action stuff in this week’s episode, including a bracing workout on a bunch of stormtroopers with a golf club-looking tool.

Also in the gang is Fennec Shand, the sniper’s sniper, presumed left for dead in the sands of Tatooine but, clearly, alive after all. The shadow we saw looming over her, after she was taken out by Toro Calican in the first season, was that of Boba, and he has nursed her back to sharp-shooting health. Cara Dune also looks like she’s along for the ride. And rounding out the team, depending on the successful outcome of a prison break, is Migs Mayfield. The former Imperial sharpshooter turned not-entirely-competent mercenary of season one, is to be busted out of jail to help track down Moff Gideon’s cruiser.

All is being set up for a grand season-sealing finale, with Grogu as the prize. But one final thought occurs – what if the tragedy announced in the title is yet to happen? The final scene of the episode sees Grogu put to sleep by the pulse ray of a trooper’s gun. But before he is sedated, we watch the “asset” make happy sport of chucking troopers around his cell. That boy can channel the Force alright, but in which direction will he use it? Ahsoka Tano warned that Grogu was “vulnerable” to his fear and anger without Mando around. Now he’s in the clutches of the Empire. Could Baby Yoda be about to break bad? 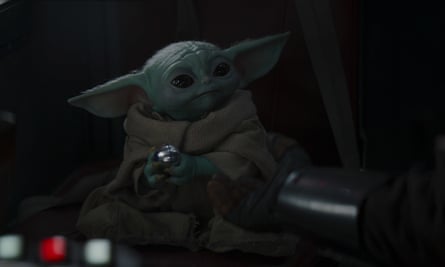 Will Baby Yoda pivot to the dark side? ... Grogu in The Mandalorian. Photograph: Disney

The moral of the story

You can never truly know someone. OK, so Grogu might not yet become a Sith lord, and all could turn out for the best (hey, I’d even say it’s likely). But Mando learned this week that his charge contains secrets and knowledge that he will never understand. That Force field Grogu creates on the seeing stone is both a real and symbolic illustration of this. As hard as Mando tries, he can’t get inside it; his determination to do what he considers best for the child is rejected by the child himself.

There was one blue butterfly. That was it. And I checked on Wookieepedia and it has a page for it.

Temuera Morrison, who played Jango Fett in Attack of the Clones, now plays his cloned son (he had previously rerecorded Boba’s voice parts for the 2004 Star Wars DVD rereleases and played him in several video games) and has a whale of a time doing it. Next week we’ll see the return of Bill “Netflix Special” Burr, incidentally another Breaking Bad alumnus, whom I see was only cast in the show because Jon Favreau admired his professed dislike of Star Wars. Now Burr is on the payroll, though, he has said he would “absolutely” jump at the chance of a return.

See above, pretty much. But I’m uncertain as to quite what that Force field was doing. Was Grogu uploading a message to the Jedi community? Was he downloading instructions? Or was it just some kind of Outer Rim tanning salon, with Grogu topping up the old green? Answers on a hologram to the usual address.

Arsenal approached Real Madrid regarding the lease of Edegra
Inter can sign Gomez only in the case of the sale of Eriksen. The Argentine likes Conte
Real Madrid, AC Milan and Man City are Interested in Feyenoord defender Senesi. He is estimated at 35 million euros
The election of the President of Barcelona will be held on March 7
Tiago Silva on Chelsea: No one said it would be easy. We are not going to give up
PSG are Interested in Eric Garcia. City defender wants to move to Barca (Mundo Deportivo)
Gasperini about the Beginning of: He has good technique, but Atalanta needs sharpness in attack. I am sure he will give it to us
Source https://www.theguardian.com/tv-and-radio/2020/dec/04/the-mandalorian-recap-season-two-episode-six-they-grow-up-so-fast

How many Catholic presidents have there been?

The best French skincare brands you need to know about, from La Roche Posay to Avéne