Never let it be said Eddie Jones does not have the courage of his convictions. Sidestepping the prevailing wisdom has never bothered him and neither does he mind making tough decisions. It is not compulsory for England head coaches to toe the party line nor are they judged, in Jones’s experience, by how many affectionate cards sit on their mantelpieces at Christmas.

But, strewth, he can be brutal. As Billy Vunipola, Mako Vunipola, Jamie George, Ben Earl, Alex Lozowski, George Ford, Danny Care, Dan Robson, Ollie Lawrence, Ted Hill and any number of others can testify, he gives people the benefit of the doubt as often as a starving rattlesnake. Once you cease to be flavour of the month or Jones senses the vaguest hint of complacency, banishment to the dusty outback of selectorial oblivion can be horribly swift.

Having named 180 players for assorted England squads in his six years in charge, no one could accuse Jones of not playing the field. He swipes right as enthusiastically as any lovestruck teen and, this time around the uncapped Raffi Quirke, Nic Dolly, Tommy Freeman and Mark Atkinson are included. Even Jones would not have included every member of that quartet on his coupon last spring.

The Breakdown: sign up and get our weekly rugby union email.

It turns out, though, that what is really driving Jones is less the youthful potential of certain individuals – Quirke and Freeman certainly possess plenty of that – but the scarring from his previous coaching life. As coach of Australia back in 2003 Jones felt he kept faith for too long with a few of the team’s old guard. The Wallabies took England to extra-time in the final in Sydney but, clearly, a few regrets still linger.

Hence the deliberate decision to change things, to throw another cat in among a reshuffled bunch of pigeons, and, perhaps, to adapt England’s game. Look beyond the immediate headlines and the oohs and aahs of the gallery and this might be one of the swifter England squads ever selected. Adam Radwan, Jonny May, Harry Randall, Quirke, Sam Simmonds … Jones clearly fancies seeing some go-faster stripes on the old sweet chariot.

And yet. With Jones there frequently has to be a caveat because his choices can so often run contrary to the latest available evidence. If the revitalised Vunipola brothers and George are not back playing at international intensity, then many of us need to take an urgent trip to Specsavers. There are five “tournament chunks” of time left before the 2023 World Cup and Jones has confirmed that “all the foundations for the team” will be lain down at next week’s camp in Jersey. Fine, but how is anyone truly going to know if Jamie Blamire or Dolly are better hooking options than George if they never share the same training field?

There is also a sense the bulk of this autumn squad must have been chosen before Sunday afternoon, when the ousted Saracens contingent made one of the more striking statements in recent Premiership history in a 71-17 win at Bath. How else to explain the absence from England’s plans of the outstanding Vunipola brothers, George and Earl? Or, conversely, the inclusion of Charlie Ewels and Will Stuart, who both experienced a chastening afternoon. “If I had any second thoughts, we’d have a different squad,” said Jones, sticking fixedly to his latest “Treat ’em mean, Keep ’em keen” masterplan.

But hang on a moment. Does there really have to be a direct correlation between a chain of events in Australia two decades ago and England’s situation now? Jones says he is looking for “discretionary effort” – ie people busting a gut to get on the World Cup plane – but when does the constant churn of assistant coaches and players cease to be a positive in terms of building relationships and loyalty? There are times in coaching when a big stick is useful but even very senior players often respond better to a quiet carrot or two. 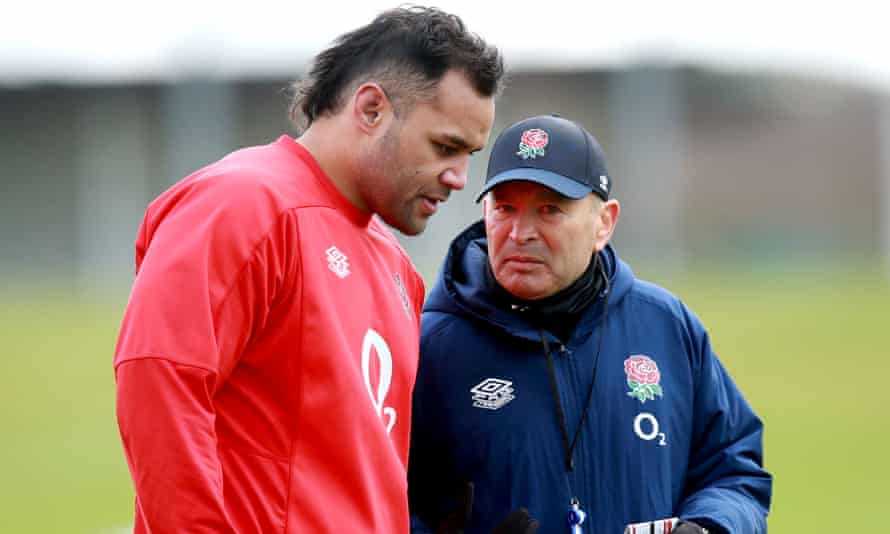 Eddie Jones has wielded the axe with Billy Vunipola, one of the senior players missing from England’s squad. Photograph: Dave Rogers/PA

For all the excitement and promise of Marcus Smith, Alex Dombrandt, Max Malins and the lightning-quick Radwan, there remains the smaller matter of England’s starting balance. If Smith starts at 10, as he surely should be offered the chance to do, it would seem to make sense to pick his clubmate Dombrandt and a physical ball-carrying centre. But Owen Farrell has been retained as captain and Robson, arguably Smith’s most complementary scrum-half option, is not even in the squad. England do not want to risk falling between two tactical stools.

Then again, who knows? Maybe a slightly experimental November will pay off. Jones’s restless magpie eye, always on the look-out for something new and shiny, could unearth a couple of gems for France in two years’ time. Maybe England will approach the 2022 Six Nations with fresh forward momentum – Jones is a big fan of the Newcastle prop Trevor Davison and no one doubts the promise of Leicester’s George Martin – and with a freewheeling back division. Not to mention their fired-up Saracens contingent pawing frenziedly at the ground, desperate for a recall. In that event Jones’s ruthlessness will have paid off handsomely.

Free daily scratchcard is turning into a Christmas giveaway bonanza

You could face a £5,000 fine for playing Christmas music in your car

ADVERTORIAL: Why you need a better night’s sleep - and how to get it

How to tell difference between Omicron coronavirus variant, a cold and the flu

End of cash machines? You can now get up to £50 cashback in thousands of shops without buying anything

Would the Welsh Government go into a lockdown to stop the Omicron variant spreading?

Billie Eilish urges people to get vaccinated: ‘It’s not just for you, you selfish b****’

‘I got to live my dreams’: Johanna Konta announces retirement from tennis aged 30

Bad memory? Experts explain the effects of sleep deprivation on your brain

Lumo: one month on, how is the new London-Edinburgh train doing?

Greggs is giving away 50,000 free festive bakes when you download the new app

10 best proseccos to add some sparkle to your festive season

Eight things you should do to beat omicron Covid variant, according to Dr Fauci

Overdue book returned to a library after 110 years