SCANDALOUS details of Johnny Depp and Amber Heard's tumultuous relationship has this week been revealed in dramatic claims at the High Court.

The 34-year-old actress has alleged her ex-husband Depp, 57, attacked her over 14 separate occasions over three years during their relationship.

Depp has denied each of the claims against him - claiming that Heard was "building a dossier" to support "hoax" allegations.

The Pirates Of The Caribbean star is now suing The Sun's publisher News Group Newspapers (NGN), and its executive editor Dan Wootton, over an April 2018 article which labelled him a "wife beater".

The High Court this week heard evidence over the 14 alleged incidents from Depp himself, with the trial expected to last another two weeks.

Heard has claimed Depp hit her for the first time when they were in LA after she laughed at his tattoo.

The actress claimed her then husband slapped her three times after she laughed at his inking, which originally read "Winona Forever" in tribute to Winona Ryder but was then changed to "Wino Forever" after they split.

He apparently apologised and blamed "the monster".

However Depp denied hitting her, saying she had seen the tattoo "countless" times before the alleged incident happened.

It was claimed he hit her "so hard that blood from her lip ended up on the wall" and that he tried to set fire to the painting.

The star later referred to the alleged incident in a text as "disco bloodbath" but said in court it was to placate his wife, and was not an apology.

Heard and Depp were in Hicksville, US with a group of people including Heard's sister Whitney and Mr Depp's assistant Nathan Holmes.

Heard claimed her then husband had been "taking drugs" became "enraged" and "jealous" when one of her friends touched her.

She said that he then threw glasses at her, ripped her dress and damaged the cabin they were staying in.

Depp has denied the claims, saying Heard's friend touched her in an "extremely sexual manner" and he spoke to her to ask her to stop.

Mr Depp said he drank and took magic mushrooms, as did Ms Heard and her friends who also took MDMA.

Depp was accused of throwing chair at Heard and slapping her after booze-binge on private jet from Boston to LA.

It was claimed he had believed his wife was having an affair with actor James Franco.

Depp, who denies the claims, has instead alleged that it was Heard who was "berating" and "screaming" at him.

He said he then "grabbed a pillow" and slept on the bathroom floor.

Depp allegedly lashed out at his ex as she was "withholding meds" from him on a detox trip to his private island in the Bahamas.

However, he has claimed he was in "no physical condition" to push anyone.

Depp was allegedly "violent" towards Heard in LA and later called himself a "f***ing savage" and a "lunatic" in text messages read in court.

The actor has denied any allegation of violence and says NGN has "failed to provide any particulars of the alleged violence".

While the couple were in Tokyo, Japan, Heard claimed Depp shoved and slapped her and grabbed her by the hair, before standing over her and shouting while she was on the floor. Depp has denied this.

Depp is alleged to have repeatedly assaulted Heard in a "three-day hostage rage" in Australia.

He is accused of pushing her into ping-pong table, choking her against fridge and throttling her.

Depp then severed his finger - claiming that he suffered the injury after Heard threw a vodka bottle at him while she claims he was hurt when he smashed a phone against the wall.

The actor then used his severed finger to write "I love u" on the mirror.

Heard said Depp was "enraged" and allegedly pushed her sister Whitney before tearing out her hair and smashing up their LA penthouse.

Depp, however, says Heard was "berating him in a rage" as he tried to leave, threw a can of Red Bull at him and punched him in the face before he finally left.

While on honeymoon on the Eastern and Oriental Express in south east Asia, Heard has claimed Depp "pushed her against a wall by the throat causing her to fear for her life".

The actor denied this.

In LA, Mr Depp is alleged to have ripped Ms Heard's shirt and "threw her around the room", also throwing a wine glass and a "heavy glass decanter" at her, as well as pushing her over a chair which caused her to bang her head against a wall.

Mr Depp says they were in LA for Thanksgiving, but has denied any allegation of abuse.

Depp admitted he headbutted Heard at their LA penthouse, but in court this week claimed it was "accidental".

During the alleged incident, Depp is claimed to have thrown a decanter at her and pulled out "large chunks" of her hair, while yelling: "I'll f***ing kill you".

However Depp has maintained that "the only violence committed on that date was by Ms Heard", who allegedly "violently attacked" him.

Depp allegedly arrived late to Heard's 30th birthday party with an argument claimed to have unfolded after the guests left.

It has been claimed the actor threw a magnum of champagne at his then wife.

Depp said the next day a cleaner found faeces in the couple's marital bed and resolved to divorce her in a "fitting end" to their relationship.

Depp allegedly arrived at the couple's LA apartment "drunk and high" before the court heard he threw a magnum of champagne at Heard.

Mr Depp claimed his two security guards entered the room when they heard Ms Heard shouting, and saw her "repeatedly screaming, 'stop hitting me, Johnny'" while he was 20 feet away in the kitchen.

A police officer who was called to the home after a 911 call claimed she did not see any damage and while Heard was "crying" she did not appear to have any injuries. 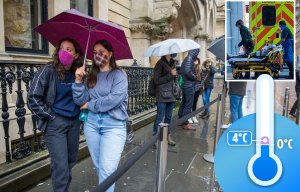 The actor’s case against NGN and executive editor Dan Wootton came after an article was published in 2018 with the headline “Gone Potty: How can JK Rowling be ‘genuinely happy’ casting wife beater Johnny Depp in the new Fantastic Beasts film?”.

NGN is defending the article as true and says Mr Depp was “controlling and verbally and physically abusive towards Heard, particularly when he was under the influence of alcohol and/or drugs” between early 2013 and May 2016, when the couple split.

Arsenal have offered Willian a 3-year contract
Aurier agreed to move to Milan. Tottenham want 20 million euros for a defender
Can-Casillas: One of the greatest is leaving the stage. You have always been an example, my friend!
Atletico President: Simeone is great. He constantly brings victories and titles
Bayern goalkeeper Fruchtl can go on loan to Nuremberg
Liverpool can buy Norwich defender Lewis for 10 million pounds as a competitor for Robertson
The Europa League returns today. We remember where everything stopped
Source https://www.thesun.co.uk/news/12094756/johnny-depp-amber-heard-allegations-list/