TEEN Mom 2 star Jade Cline’s plastic surgeon is under investigation after "ignoring" a patient who allegedly “bled” and “went into shock” following a lipo procedure.

On this week’s Teen Mom 2, Jade, 24, underwent a Brazilian butt lift, 360 liposuction, including on her neck, and had fat transferred to her breasts.

Dr. Oliver Chang of Spectrum Aesthetics in Florida performed the procedure, as he was filmed answering her questions before the surgery.

The Sun can exclusively reveal the Department of Health filed a dispensary action against Dr. Chang in 2019.

According to the complaint obtained by The Sun, Dr. Chang performed “suction assisted lipectomy,” which is the removal of fat, of the “abdomen, flanks, lower back and chin.”

There were “no complications” during the procedure and the patient was discharged on the same day.

She had a followup appointment for the next day.

According to the complaint, the patient “noted bleeding from the operation site on her way to her hotel and lost consciousness.”

She was taken to the hospital by ambulance and was diagnosed with “hypovolemic shock.”

She was given "multiple blood transfusions" and was transported to a different hospital for additional treatment.

The complaint claimed Dr. Chang was unreachable during the ordeal.

The documents claimed: “From on or about December 8, 2018, through December 9, 2018, Respondent failed to respond to multiple attempts to contact him with regards to Patient R.M.’s condition.

“The prevailing professional standard of care required Respondent to be available and/or to have a designee available in the event of an emergency or complication.”

The Department of Health requested the Board of Medicine impose one or more penalties.

The penalties included: “Permanent revocation or suspension of Respondent’s license, restriction of practice, imposition of an administrative fine, issuance of a reprimand, placement of the Respondent on probation, corrective action, refund of fees billed or collected, remedial education and/or any other relief that the Board deems appropriate.”

The case remains ongoing, a clerk for the Department of Health confirmed to The Sun.

Dr. Chang did not respond to The Sun's request for comment.

On the show, Jade was discharged directly after the procedure, as she cried in pain while in the car with her mom, Christy, and her stepdad.

Though one of the nurses told Jade’s mom the pain would “subside,” it only got worse, as Jade called it “excruciating.”

Jade said on the episode: “The pain in my a** and legs and back is f**king excruciating. I can’t even sleep. I can’t get comfortable. It’s even worse than I thought."

Jade’s mom and stepdad went missing for three hours while picking up her pain medication.

Christy claimed no pharmacy had the prescription, as they drove as far as an hour away to find one who carried the painkillers.

Executive Producer Larry Musnik stepped in and encouraged her boyfriend, Sean Austin, to call an ambulance so she could receive pain medication as soon as possible.

Fans accused Christy of stealing the painkillers, as she is a recovering addict.

One follower asked Jade: "Where did your mom go and why did it take so long to come back after being asked?”

Jade replied: "She dropped me off at the AIRBNB to go get my prescriptions, but she said she couldn't find it anywhere and that's why it took her so long to get back. Of course I was mad.

"I'm still upset about that whole thing. But I've moved on from it. I don't let things stay attached to me and cause me distress anymore.”

Another follower said: "Sorry but I think your mom filled the script and took the pills or kept them for herself.” 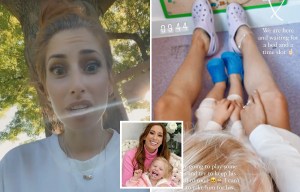 Jade shot back: "UHM No LOL. My mom wouldn't take my pills and use them. Also, she's never used pain pills before or been addicted to them.”

Jade has been showing off her new body on social media, as she looks unrecognizable following the procedure.