SEAN Austin has faced backlash from fans after he unleashed his fury on both the MTV producers and Jade Cline's parents in Tuesday's episode.

The Teen Mom 2 star aired his frustrations over his baby mama's parents who he deemed "worthless" in their attempts to help her post-surgery.

Sean has faced controversy after exploding on not only Jade's mother and father during Tuesday's episode but also in becoming violent towards the MTV producers in a heated moment.

After arriving at the hospital for Jade's plastic surgery follow-up appointment, the reality star looked exhausted as he rested his head on the mini-van steering wheel.

When an MTV producer approached the vehicle to speak to the TV personality, he slammed the door open and began yelling.

"Back up dude, get those cameras off me man!" he shouted.

"You think I'm f**king joking bro? Get the f**king cameras off me dude. You really think I would come looking like this if I knew you were f**king filming?" he ranted, while the network's security held him back.

"God d**n get the f**k out of my face dude before I start f**king people up," the father of one continued as he walked towards the building.

Later, back at the rental house, tensions ran high as Sean got into an altercation with Jade's mom Christy and dad Corey.

One of Christy's credit cards flew out of her purse and hit Jade and Sean's daughter Kloie, causing the three-year-old to scream that her grandfather had "thrown" the card at her.

Sean then felt "triggered" and yelled at Corey, who then "attacked" Kloie's father as the two got into a "physical fight."

Fans were shocked by the young father's behavior, as they took to social media to scold him for acting out of aggression.

One critic wrote: "Sean is so annoying……yall signed up to be on the show. Wtf did you think they were going to do???"

"He was screaming having a fit about the cameras filming HIM he wasn’t even concerned about Jade," another fan said.

A third insisted: "Hey Sean it's Jade's job that the camera crew have to film what's going on with her. We know that your stressed but don't take it out on the camera crew. That's not helping jade!!!"

Jade, 24, went through an extremely "excruciating" plastic surgery procedure last year, including a Brazilian butt lift and Lipo 360, and the entire experience was documented on Teen Mom.

After returning home from the initial surgery, her mom disappeared for hours while the Indiana native waited for her to return with medication.

The pain became so severe, that she was forced to call 911 to get some relief, though soon after Christy returned with the pills.

Fans were flabbergasted by Christy's negligence, as they accused her of "stealing" her daughter's prescription meds.

Over the weekend, however, Jade jumped to her mother's defense as she denied the fact her mom could ever steal or sell her pain pills.

"UHM No LOL. My mom wouldn't take my pills and use them. Also, she's never used pain pills before or been addicted to them," she clapped back.

"Just cuz your mom wasn't addicted to them, she could have sold them for other drugs," another speculated, though Jade replied: "But she didn't? So why is this relevant?"

The TV star also confessed that she has already forgiven her mother for her behavior during the surgery, saying: "The recovery definitely didn’t goes as planned but sometimes that’s how life is. It’s on and done with. 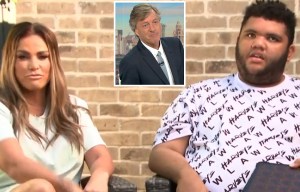 "We’ve all moved on. Y’all want me to hate my mom over this shit which is crazy.

"You ppl love misery lol at the end of the day that’s my mom and I love her."