Teachers and pupils may be unable to travel to school, and there could also be a shortage of school food, they warn. The crisis has spurred from a shortage of HGV drivers resulting in fewer deliveries of fuel to petrol stations across the country. This has led to mass panic-buying, despite repeated calls from officials that this is unnecessary.

Desperate teachers have taken to social media to plead with drivers to stop the hysteria at petrol stations.

One wrote on Twitter: “So I just tried to get petrol. Woman at station questioning people to see if they qualify. It was my turn (I don't have enough petrol to get to school tomorrow. Just £10 worth I need). She asked if I'm an essential worker, I said teacher, she said no! What now then.”

Another woman said: “My partner is a primary school teacher and needs to drive to get to work every day. Right now, he has enough petrol for next week but if the panic-buying continues and he can't get near the pumps to fill up, he is screwed. #Stoppanicbuying.” 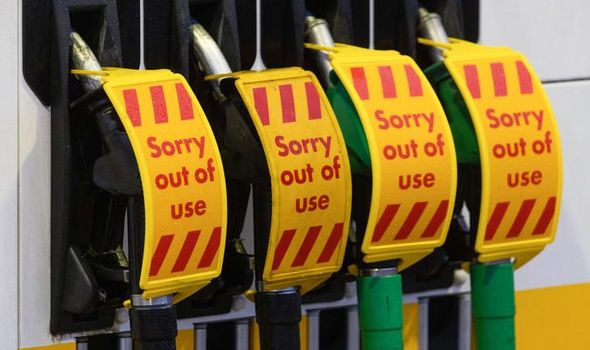 A headteacher added: “Really! Forget Covid, petrol shortages are now having an impact on schools being able to deliver. I have had to offer to pay for taxis to ensure staff get to work tomorrow. Really people.”

According to The Times, one school in Surrey told parents: “The current petrol crisis could potentially disrupt school next week. The ability of staff and pupils to get to school may be compromised and there may also be issues with our food deliveries.

“We sincerely hope that it won’t be the case, but if it becomes necessary to temporarily move to online learning, we will consider this as an option.

“Clearly, we have no desire to go back online so soon after the challenges of the last couple of years, but we cannot exclude the possibility that it may be necessary. We will, of course, closely monitor the situation and will keep you fully informed.”

So I just tried to get petrol. Woman at station questioning people to see if they qualify. It was my turn (I don't have enough petrol to get to school tomorrow. Just £10' worth I need). She asked if I'm an essential worker, I said Teacher, she said no! What now then.

Officials have assured drivers that there is not a petrol shortage and no need to panic-buy.

Environment Secretary George Eustice told drivers to return to their normal pattern of buying petrol as filling up unnecessarily is causing more problems.

He said: “There isn't a shortage. There have been some shortages of HGV drivers getting petrol to forecourts, but actually that is quite limited.

"The only reason we don't have petrol on the forecourts is that people are buying petrol they don't need."