The Tartan Army in Scotland’s Fan Zone were down but not out tonight despite Scotland’s dreaded loss in their first Euros match.

Around 3,000 gathered at Glasgow Green to watch on huge screens, giving the closest experience to the real thing.

During the four hour session the closest fans got to a security incident was when one fan introduced a beach ball to bounce around tables.

Fans were otherwise in good voice, belting out Flower Of Scotland with gusto at kick off.

Revelry did die down to a whimper as the final minutes dragged by, matching the vibe inside the National Stadium.

Despite a 23 year gap since Scotland’s last major footie finals, the three generations of Stewarts have now shared on four big finals.

Craig accompanied his dad to the Italia ‘90 and France ‘98 World Cups and he also went to watch the Scots in England at Euro ‘96.

Craig, a driving instructor, said: “Archie is disappointed, as we all are, but he’s aware that my dad and I were so keen to have him take part in something like this.

“The result went the wrong way but maybe it’s not a bad thing to get a touch of reality at a young age because we all have to deal with it sooner or later.”

Craig said the experience had been as good as it could be under the circumstances.

He said: “The set-up was great. It felt secure and well organised and as good as any other public service places during Covid.

“The atmosphere really id feel like a Tartan Army experience although things tend to flatten off when we’re getting beat.”

He said: “The way I see it, England don’t need to win on Friday but Scotland do.

“All the weight of expectation and pressure has probably been lifted a bit with this reality check.

“Historically that’s a time when Scotland can get their best results and best performances so we’re very much looking forward that the next game, which is a biggie.”

Archie was wearing a Scotland away top with John McGinn on the back. He said: “I feel a bit sad because Scotland didn’t win but it was an exciting day.”

Dougie said: “We got a rotten result but we all enjoyed sharing in the day because it’s been a 23 year wait and long overdue.

“Archie will be talking about this in years to come in the same proud way Craig and I do today.” Fans had been unanimous in their optimism before the match, with all predicting a Scotland win or draw.

The 3,000 who filed into Glasgow Green was a far cry from the 80,000 that would fill the park in normal times - but they made a racket.

Andrew Soutar and three pals travelled down from Lossiemouth after being lucky enough to bag Fan Zone briefs.

Andrew, 28, said: “It was well worth the trip for us because we were six years old the last time Scotland was in a major finals.”

Project manager Andrew said that the feel-good factor was so high it couldn’t be deflated by £6 pints.

He said: “We’ve been looking forward to having a summer pint in the open air and there’s a festival feel to all this.

“None of us felt nervous about coronavirus before we came and when you see the set-up here, they’ve done a great job.

“The open air and social distancing makes it safer than a lot of other situations people might find themselves in.”

Steven Monteith travelled all of two miles from his home in Toryglen - right next to Hampden - to hit the Fan Zone with son Aaron, ten.

Labourer Steven said: “We could have watched it on the telly but it’s great to get along and get a bit of Tartan Army vibe.

“Aaron has been excited about this and he thinks we can win the whole thing.”

Jim, 41, recalled being in Paris for the Scotland game against Brazil that kicked off the World Cup 23 years ago.

He said: “I was in a pub outside the stadium and the atmosphere was mental, unforgettable.

“It’s all a bit different this time but it feels great to be shouting on Scotland again in a big competition.”

The Tartan Army members in the Fan Zone refused to be deflated despite going a goal down just before half time.

Scottish weather played its own part in proceedings, with rain falling just as the Czechs went ahead.

Some fans were grabbing Saltire flags to use as second layers as the temperature plummeted. 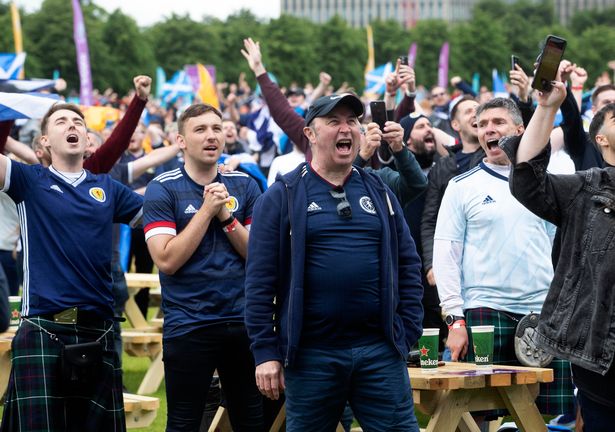 Neil said: “The performance was pretty good and we didn’t deserve top be beaten by two goals.

“They took their chances and we didn’t.”

Neil said the experience has been a tonic.

He said : “This has been a real antidote to all the doom and gloom of lockdown. Even the travel down to Glasgow was like a taste of the normal times.

“We are all Tartan Army regulars and we’ve been all over Europe. We’d have been at Hampden if the capacity hadn’t been reduced. It’s been great to have the big matches back.”

The mobile covid testing centre at the Fan Zone reported a “steady flow” of punters for its first few days.

But takers were scarce ahead of the kick-off against the Czechs amid all the big match anticipation.

The Daily Record checked out the tests while the Tartan Army members were focusing on the bar.

Nurse Janet Campbell said: “We’ve had a steady stream of interest before the matches and afterwards.

“The atmosphere today has been really good but we are parked a wee bit out of the way so people have had to come and find us.

“It may be that we’ll get a good few people in the door at the end of the day.”

Ahead of the game 17,000 ticket holders due to attend the Fan Zone at Glasgow Green were to be sent rapid tests by post.

The mobile testing bus at Glasgow Green provided on-site lateral flow testing, while attendees may be asked by marshals on-site whether they have taken a test as part of ongoing reporting on the site.