On a stone relief from 11th-century India, a moustached man is enthusiastically pleasuring his lover. She’s upside down, legs in the air, so he can devote himself to tonguing her yoni. Their acrobatic enjoyment is precisely and gracefully carved.

Looking at the women of Tantra, you can see why it’s best to stay on their good side. Sculptures of Chamunda, a fearsome Tantric transformation of the Hindu great mother Parvati, portray an emaciated living corpse wearing human skulls as jewellery. Another version of Chamunda is Kali, waving her multiple arms as she sticks out her tongue and treads on other gods. 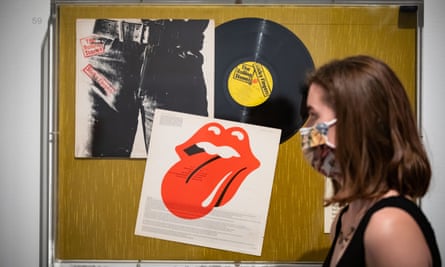 So it’s not all sweet love, this belief system. Perhaps that’s why it appealed to the Rolling Stones. While the Beatles went off to an ashram in India to find peace and transcendence, Mick Jagger came up with the idea for the Stones’ tongue and mouth logo after a flirtation with Tantra’s disruptive intensity that also saw him produce a 1969 documentary called Tantra: Indian Rites of Ecstasy. You thought that logo was based on Jagger’s lips? So did I, but it’s also inspired by the ravenous obscene tongue of Kali.

Tantra is not transcendent. Rejecting the far older Indian belief that this world is illusory, it finds enlightenment in extreme sensory embraces of material reality – not just sex but death. Tantric ascetics traditionally lived in cemeteries or covered themselves with the ashes of the dead.

Some of the most astonishing objects here come from Tibetan monasteries, for although Tantra started as a twist on Hinduism it soon dynamised Buddhism, too. The most shocking exhibit here is a Tibetan monk’s apron made of human bone. It’s nauseating, but overcoming disgust is part of the Tantric road to truth. There’s also a ritual cup made from a human skull. This comes from 19th-century Tibet, but it’s just like the ones in much earlier Indian art.

An elegantly cruel 10th-century statue of the god Bhairava holds both a skull cup and a severed head. A dog tries to lap at the head’s gore. It looks like a friendly dog, but it’s a defiling, filthy creature that haunts cemeteries and eats corpses given a chance. Bhairava was created by the Hindu god Shiva to cut off one of Brahma’s heads after Brahma insulted him. It’s the severed head of Brahma that Bhairava holds in the earliest art here, including a powerful 13th-century work in which he gazes calmly, wielding a sword.

The exhibition claims Tantra is subversive, “transgressive” and revolutionary. But to understand what it is subverting you have to understand India’s entire religious history – and the British Museum seems to assume you already know it. I really wanted to start a bit further back. Tantra is not an independent religion. It’s a flavouring or style of spiritual practice that adds new dimensions to two ancient faiths. Hinduism evolved from about 1500BC and the Buddha died in the fifth century BC. The deliberate defilements and violations that Tantra espouses are specifically aimed at the purity and caste codes of Hindu society. Even its gods are new, sinister personifications of much older Hindu deities – and later, Tibet’s mountain demons. 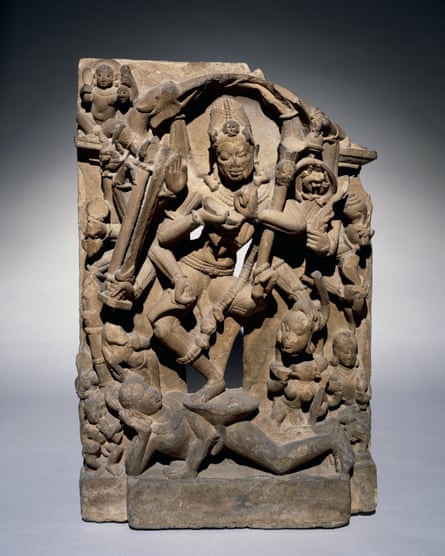 Did I say two religions? Some of the most beautiful art here comes out of a third faith: Islam. There are lovely Mughal paintings of members of the court meeting Tantric ascetics – yogis – to learn their spiritual secrets. The Mughal empire brought Islam to India. But its rulers were tolerant and curious, and they respected yogis. Then again, some of the paintings are ambiguous. The visionaries in them may be either yogis or Sufis – practitioners of Islam’s own spiritual alternative.

The Mughals ruled northern India until they were gradually sidelined by another empire – ours. And there’s no point pretending the British Empire looked at India’s spiritual riches in the same broadminded way. Instead, the goddess Kali was demonised as a vile incarnation of Indian lust and violence. A wooden model made for a British client of a “Thug” gang embodies the colonial dread of these outlaws, said in febrile Victorian imaginations to worship Kali.

In 1865 the cunnilingus relief purchased by the British Museum at the start of the century was hidden away in its Museum Secretum as an “obscene” artefact. It would take until the 1960s for the British empire’s nightmare version of Tantra to be dissolved in sweet-smelling clouds of incense as Victoria finally died and Jagger devoted himself to Kali. The psychedelic era, for all its hippy cliches, saw the true power of this philosophy – and its universality. Sex and death and the need to confront your fears are as urgent today as they were when medieval Indians sought spiritual knowledge in cemeteries and bedrooms. After all, to quote a Rolling Stones song that seems genuinely inspired by Tantra, we are all dancing with Mr D.

Nagelsmann victory over Istanbul: Not fully satisfied with the game Leipzig was fatigue, not the most effective pressure
Goalkeeper Brugge Croat about 2:1 with Zenit: We proved that we should not be considered outsiders of the group
Manchester United won again in Paris with a late Rashford goal. An unexpected hero - a 22-year-old reservist who has not been on the field since December 2019
Jurgen Klopp: first Oliver didn't see the moment, then VAR forgot the rules. And the consequences came only for van Dijk and Tiago
Favre on the defeat against Lazio: Dortmund lacked determination. We needed to play an outstanding game, and we didn't
Lampard on 0:0 with Sevilla: I think both teams are happy with the draw
Tuchel Pro 1:2 with Manchester United: PSG were not on the pitch in the first half. One of the worst games of the team
Source https://www.theguardian.com/artanddesign/2020/sep/22/tantra-at-the-british-museum-review

How the climate crisis is affecting wildfires around the world

FBI ‘has seized Hunter Biden’s laptop and believes that Ukraine, crack and sex files are NOT Russian disinformation’

US spies and diplomats accuse Trump administration of cover-up after mysteriously getting sick in Cuba, China and Russia

Somehow Donald Trump's dancing to YMCA has got even worse