CHRISTMAS is the busiest time of the year for pet insurance claims, as animals gobble food that is bad for them and swallow decorations that could prove deadly.

Chocolate and raisins can kill dogs, while every year vets see cats who have eaten tinsel. That can block their insides and leads to an average bill of £195 or more.

Insurer More Than receives 85 per cent more claims over the festive period than the monthly average, mostly caused by festive food and decorations.

It said 12 per cent of owners have seen a pet steal Christmas food off their plate, while 60 per cent admit to sharing their festive roast dinner — despite it being potentially harmful to pets. One in ten owners delay taking their animal to a vet, fearing sky-high bills.

Beth Jessy, 22, from Kent, knows how scary it is when a furry friend gets its paws on something it was not supposed to.
Her five-year-old Jack Russell-Chihuahua cross Esme ate her own body weight in chocolate after she found a wrapped 850g choc bar under the Christmas tree.

Beth says: “While we were out for a family dinner, Esme managed to open up a gift under the Christmas tree — a big bar of Dairy Milk."

“When we got home, we saw the empty wrapper on the floor and Esme was acting very sheepish with her tail between her legs.

“As soon as she started to be sick we called our closest emergency vet and they advised us to bring her in. She was put on a drip and had to stay in for a few days."

“It was very scary at the time, as she was only small. We were told to expect the worst.”

Skinless and boneless white meat are OK for cats and dogs to munch on, as long as there is nothing for them to choke on.

While tinsel, baubles and fairy lights will make your home feel festive, decorations can cause serious harm to pets.

A third of owners admit they don’t consider the wellbeing of pets when purchasing decorations.

Pet Vet Sean McCormack says: “Although shiny tinsel may look like a great toy for animals, it can be deadly if ingested."

“It can wrap around their tongue or bunch up inside their intestines, blocking or even rupturing them."

“And if your puss decides to jump on your Christmas tree, it can fall over and smash glass baubles, causing potential harm to their unprotected paws."

“Try not to leave any edible treats under the tree, as greedy pooches could easily tuck into a tasty midnight snack.” 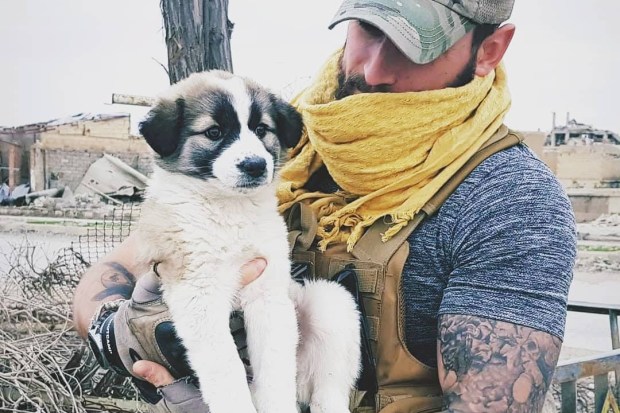 MEET Barrie the Anatolian Shepherd cross, who was found whimpering in the remains of an exploded building in Syria.

Bomb disposal expert Sean Laidlaw, 31, from Romford in Essex, found the pup while he was in the war-torn country in February last year. The former Royal Engineer credits Barrie with helping him overcome PTSD.
Sean, who runs fitness firm Beyond Limits, said: “Within a week of finding her, I noticed such a change in myself and everyone around us. Everyone was happier. I knew I would bring her home.
“Barrie gets me out of the house. She makes me interact with people.
“Dogs have a natural instinct to read your moods and Barrie has definitely mastered it to perfection.”
Check out Barrie’s Instagram @barriespaws.

REECE TIMOTHY, 34, from Watford, wonders if he should add any supplements to his four-year-old miniature dachshund’s diet.

A: Supplements are not usually necessary if you are feeding your dog a high-quality, complete and balanced diet designed for their individual needs.

If Oliver has specific health needs, such as joint disease, there are some supplements – such as fish oil and glucosamine – that may be helpful.

Some pet-food brands will include these in the right amounts in your dog’s food. The difference between human and pet diets is that pet foods from responsible brands are designed by animal nutritionists to meet your pet’s exact nutritional requirements.

CAMILA THOMPSON, 26, from Leicester, has a one-year-old rabbit called Bounce who sometimes loses his appetite.

Q: MY Lionhead rabbit has been turning her nose up at what I’ve been giving her, which includes muesli mix, hay, grass and fruit. What can I do?

A: Rabbits are masters of disguise when they are unwell because they are prey animals in the wild. If they show any signs of illness, it means they are much more of a target for predators.

If Bounce is still eating her pellets or a muesli mix but ignoring her hay all of a sudden, it is less likely to be serious.

How to get hundreds of pounds off your energy bills

Perhaps that batch of hay has a new flavour or is slightly musty. Rabbits have very sensitive tastes.

If she has gone off her food entirely, this could indicate gut problems that can turn very serious. So get her checked out at a rabbit-friendly vet.

Pellets are better than muesli mix, as muesli encourages selective feeding and can make rabbits prone to obesity.

LOOKING for something to keep your dog warm over Christmas?

We have eight dog jumpers from Equafleece up for grabs.

They come in 15 colours, five styles and more than 50 sizes. See equafleece.co.uk.

For a chance to win, email (with FLEECE as the subject) [email protected].

Man, 33, who ‘ran pregnant girlfriend off road before shooting her dead’ charged with murder of her and unborn daughter

Dreading work on Monday? How to nail a job interview

The tower burns: How Blackpool almost lost its iconic structure in 1897

Newcastle United player ratings: Low marks all round as Magpies serve up second half horror show

How Lancashire escaped the worst of Storm Dennis

Man, 48, whose body was found in canal was murdered and thrown in water, police say

Breakdown or breakthrough? Degrowth and the Great Transition

Human composting could be the future of deathcare

Liverpool are now in position to break £60million pattern this summer

11 things we all remember from RE lessons

The Liverpool FC record Manchester United can match against Chelsea

Arsenal turn on the style in second half to thrash Newcastle

'I just burst out crying... that’s when it hit home how difficult it had been': The IVF parents who were bombarded with THAT question from family members

When does Cold Feet series 10 start?