In June, the Scottish government spent £3million of taxpayers money on mobile phones so that prisoners would be less lonely during lockdown, but prison officers say that approximately a third of the devices have been tampered with and used for drug deals. According to prison guards, the decision made by the Scottish government to gift the inmates with phones has made the job of preventing drug abuse even harder.

Before the pandemic, in 2019, the Scottish Prisoner Survey found that four in ten prisoners had used illegal drugs at some point while in prison, and this number is expected to have risen.

New data gathered by Express.co.uk has found that the overwhelming majority of Britons believe that Nicola Sturgeon should resign over the latest prison phone scandal.

A staggering 98 percent of voters said giving prisoners phones that were hacked “within hours” is a mistake worthy of resignation, whilst less than two percent said she should stay on as First Minister, in a poll of 4,432 people held from September 14 to 16.

One voter, Dr Hope, said: “Sturgeon should resign for 14 years of failure, poor health and education, drugs and Alcohol abuse, lies, and misinformation. What a legacy.

“She a disgrace to Scotland and to decency.”

Drug abuse in Scotland has been labelled as a ‘human emergency’, with three times more people dying from drugs per year than anywhere else in Europe.

In 2019, roughly three people lost their lives every day to drugs, and Scotland’s drug deaths have hit a record high for the seventh year in a row, with a total of 1339 people losing their lives to drugs in 2020. 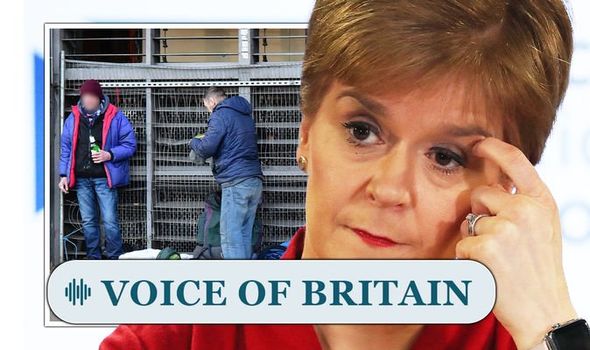 Since 2015, drug use and drug deaths have more than doubled and critics of Ms Sturgeon say that her failure to tackle the emergency, since she came to power in 2014, has led to a crisis that is spiralling out of control.

In a statement made to the Scottish Parliament in January, Ms Sturgeon accepted responsibility for the government’s failure when it came to the drug crisis.

Ms Sturgeon said: “The fact is all of these people - and those who died in years gone by - were in some way failed by us.

“Responsibility for that rests - first and foremost - with government.

She added: “And the failure is not just a moment in time.

“Anyone who ends up losing their life as a result of drug addiction, is not just failed at the time of their death – in most cases, they will have been failed repeatedly throughout their whole lives.

“I believe that if we have the will, we can and we will find the ways to stop this happening.

“Doing so requires a national mission to end what is currently a national disgrace.

“It is a reasonable criticism to say that this government should have done more earlier, and I accept that.”

In Express.co.uk’s poll a huge 87 percent of voters said the SNP are ‘completely’ to blame for the drug abuse emergency whilst a further 11 percent said the SNP is ‘somewhat’ responsible.

One voter, Forenest, said: “After more than a decade in power the SNP have been a disaster.

“Scotland has fallen in every metric available apart from xenophobic hate crimes, which have soared, healthcare has fallen, education is a mess, social services are non-functioning in some areas and unemployment has soared, drug abuse is the consequence.

“The disenfranchised either turn to drugs or emigrate and what is the SNP's response, disassemble the facts by ranting continuously about independence hoping no one will notice.”

Other voters called on members of the SNP party to resign alongside Ms Sturgeon.

Parmomad said: “Start with the resignation letter of Angela Constance, Minister for drug policy, and Humza Yousaf Minister for health and social care.”

Stay up to date with Brexit, the SNP and get comprehensive coverage from our insiders at Number 10. Sign up for the free politics newsletter here: /newsletter-preference-centre

Pat Nevin: Pulisic had periods at Chelsea when it seemed that he would become one of the best players on the planet
Sulscher on Lingard: We want to extend the contract, he is an important player for Manchester United. I hope we will come to an agreement
Messi attends the PSG - Angero match. Less than a day has passed since the Argentina - Peru game
Hazard, most likely, will not play with Shakhtar in the Champions League. He trained individually
One-Bissaka will be able to play with Atalanta in the Champions League. Manchester United's appeal against his disqualification was granted
Milan has extended the contract with the Belgian national team midfielder Salemakers until 2026. Salary - 2 million euros a year
Spalletti's Fiat Panda was stolen. The car was parked in the parking lot of the hotel where coach Napoli lives