Stephen Colbert: 'Trump's presidency is just a TV show we have to live through'

“Let’s get straight to it,” Stephen Colbert said on Wednesday’s Late Show: “For only the third time in American history, the House of Representatives voted to impeach a sitting president, Donald J Trump.”

The historic vote came only after six hours of debate on the House floor, which was “a long time to let both sides repeat the same stuff they’ve been saying for months,” Colbert said. And there were some … interesting arguments made. Georgia Representative Barry Loudermilk, for example, used his minute to tell the House that “Pontius Pilate afforded more rights to Jesus than the Democrats have afforded this president.”

“Really? You’re going to compare Donald Trump to Jesus Christ?” said Colbert. “May I remind you, Jesus never had to cut a check to keep Mary Magdalene quiet.”

Trump himself is reportedly upset by the news, as evidenced by a six-page screed sent to House speaker Nancy Pelosi on Tuesday, but an unnamed aide told the Washington Post that staffers aren’t too troubled by the vote: “We’ll just wake up on Thursday after this absurd impeachment vote and say, ‘Well, that was quite a season three finale. What’s going to happen in season 4?’”

“Yes, exactly – the Trump presidency is just a TV show we all have to live through,” Colbert said. “I call it: The Worst Wing.”

In all seriousness, she said: “We should all take a moment to be excited that Trump is finally facing a consequence.”

“OK, moment’s over,” she continued, “time for people to ruin it.” In the days leading to the House vote, South Carolina senator Lindsey Graham told a crowd at the Doha summit that he’s not even going to pretend to be a fair juror, while Senate majority leader Mitch McConnell assured viewers on Fox News that there’s no way the president will be removed from office.

“The really galling thing about the GOP firewall around Trump is that he’s still openly doing the same crimes they’re protecting him for,” Bee continued, pointing to a trip to Ukraine last week by Trump’s personal lawyer Rudy Giuliani to arrange for investigations into his political rivals.

“When the new year starts, this whole process is going to get even uglier” – Graham will show off his “best Kavanaugh confirming sneer,” Mitch McConnell “will try to rush the impeachment trail through in 15 minutes.” The futility “might even feel like impeaching Trump is pointless. But it’s not,” Bee assured. “In a world where old, rich white dudes seem to increasingly operate with impunity, today, Trump faces the tiniest bit of punity. And that is magic.”

“Impeachment: it’s when America moves its president to the spam folder,” said Trevor Noah on the Daily Show. As Trump became only the third president in American history to face an impeachment trial in the Senate, news coverage of the House vote frequently acknowledged the “historic-ness” of the day. 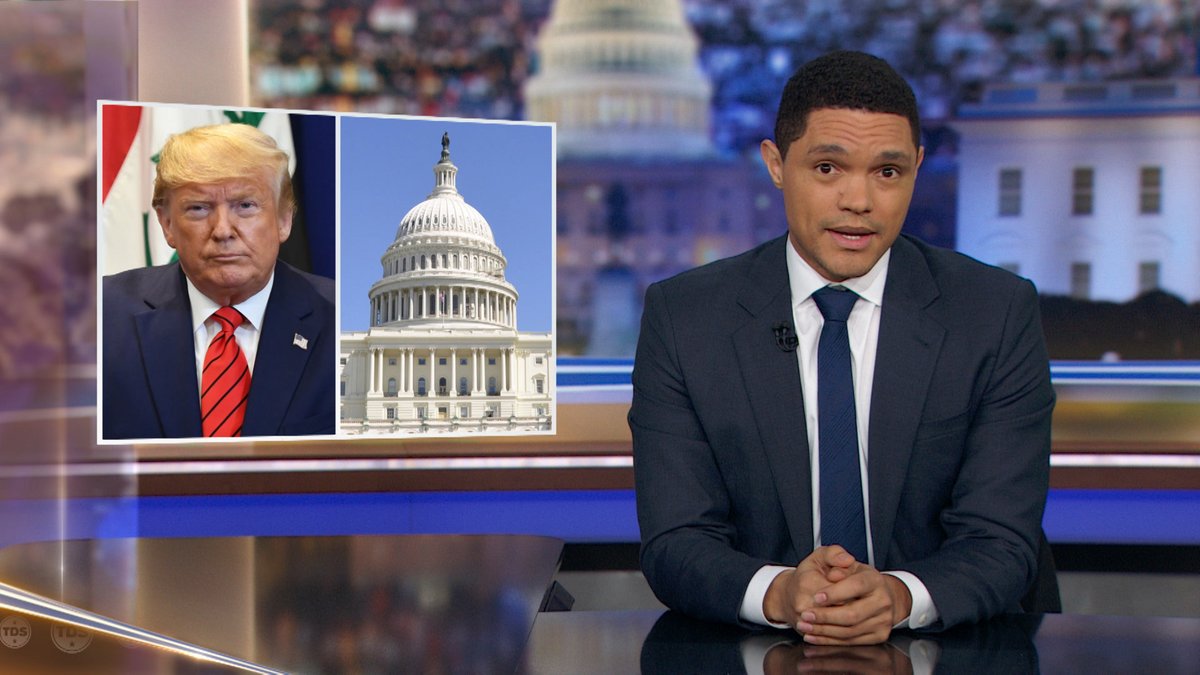 Trump gets impeached in the House, and Democrats insist it was a sad, somber day. 😢 🎊 pic.twitter.com/AEdfW3q3uD

“‘A day that will go down in the history books,’” Noah repeated. “Trump must be miserable right now, because those are the two things he hates the most: history books and going down.”

But “as upset as Trump sounds, his Republican minions in the House seemed even more angry, because they spent the day arguing on the Floor of the House and competing to see who could make impeachment sound the worst.” Numerous inappropriate comparisons were made – one GOP congressman labeled Democrats “the Senator McCarthys of our time,” another invoked Pearl Harbor, and of course Representative Loudermilk made his comments about the relative ease of Jesus’s persecution.

“Holy shit, did these guys just compare impeachment to Pearl Harbor and what happened to Jesus?” Noah said. “Did they just Google bad things and click ‘I’m feeling lucky’– is that what happened?’”

“First of all, people actually died at Pearl Harbor – no one’s dying here,” Noah continued. “Secondly, Jesus was tortured and then nailed to the cross, that is way worse than what’s happening to Trump. And even if Trump was going to be put on the cross he’d never carry it himself – he’d probably put it in the back of a golf cart.”

Coronavirus: Animal shelters clear out twice in one week as pets get adopted in droves

Coronavirus nurse has uniform and valuables stolen in overnight break-in