Despite fierce opposition from within the party and trade unions, delegates backed a change in the requirements for a leader to be elected. The reforms were narrowly backed by 53.67 percent to 46.33 percent at the Labour Party's annual conference in Brighton.

Under the new system decreases the risk of a candidate being elected who does not have the support of the Parliamentary Labour Party.

In future leadership elections, candidates to have the support of 20 percent of MPs, up from the current 10 percent.

The registered supporters scheme, which allowed people who paid a small fee and sign a declaration of support to vote, will also be abandoned.

Sir Keir will be breathing a huge sigh of relief at the result after facing the humiliating prospect of having members reject his plans. 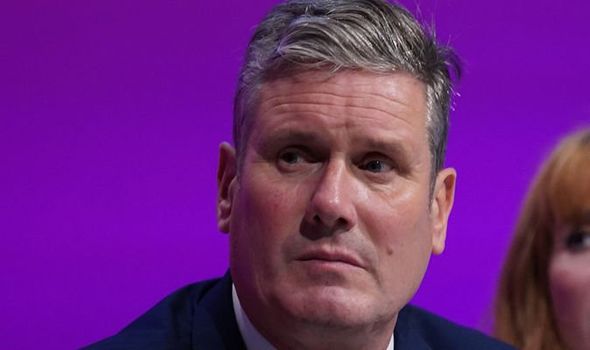 The proposals were already vastly watered down for his initial plans after intense criticism in the days leading up to the party conference.

Currently there is a system of one member, one vote (OMOV) whereby all members have an equal say in the election of a leader.

OMOV was introduced by Ed Miliband in 2014 and was responsible for the election of Jeremy Corbyn the following summer.

Sir Keir wanted to return the system to the electoral college used previously, whereby MPs, unions and members hold a third of the voting rights each.

Making the case for the changes ahead of the vote, shadow work and pensions secretary Jonathan Reynolds said: "I have had the honour of being a Labour MP for 11 years.

"These are a package of rule changes that help us do both."

But in a debate over the changes in the conference hall, Labour delegates lined up to attack the plans.

Megan Clarke, of Warwick and Leamington Labour Party suggested the changes would "limit the ability of the left of the party to lead us in the future".

She said: "This is not simply about left versus right.

"This is about increasing the power of MPs to choose our leader.

"This is about disrespecting the rights of hundreds of thousands of members and affiliate members."

He said: "What a shocking lack of faith the NEC appears to have in members."

Sir Keir has been accused by those on the Lef of the party of focusing too much on internal battles rather than fighting the COnservative Government.

The Labour leadership said it was holding the votes this year so it could then turn full attention to winning the next election.

Camp Nou lacks care. Under Rosel, the stadium was polluted by pigeons, under Bartomeu there were 127 construction defects
Joan Laporta: My worst moment at Barca was the departure of Messi. The best is a loan of 595 million euros
Nuno on Kane's performance: He is much more than just goals. Harry is one of the best
Mbappe has 2 goals and 4 assists in the last 5 matches for PSG and the French national team
Owner of Steaua: I keep my distance from the vaccinated, I sit down at 2 meters. You'll see what happens in a year or two
Ex-owner of Newcastle Hall about the Saudis: How dare 6 top clubs criticize us when they were going to the Super League?
Jurgen Klopp: Salah's performance is insane. He is one of the best players in the world, without any ifs and buts