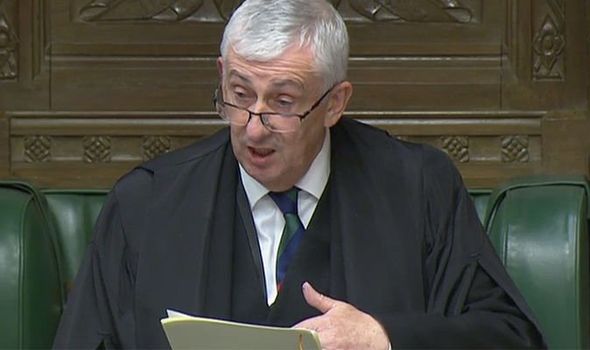 Furious at the Government for leaking finance policies to the press before formally announcing them in Parliament, he accused ministers of trying to "run roughshod over this House".

He granted backbench MPs a series of urgent questions in the Commons to punish the Government for its actions.

In a statement to MPs, Sir Lindsay said: "At one time ministers did the right thing if they briefed before a Budget - they walked."

Some MPs shouted "resign" as the visibly irritated Speaker reprimanded the Treasury.

In response to the heckles, he added: "Yes absolutely, resign.

"It seems to me we've got ourselves in a position that if you've not got it out five days before it's not worth putting out.

"I've got to say, members are elected to this House to represent their constituents, those constituents quite rightly expect the MP to hear it first in order to be able to listen to what the Budget is about, but also for the days following that to be able to hold them to account.

"It's not acceptable and the Government shouldn't try to run roughshod over this House, it will not happen."

Thousands of drivers have just DAYS to renew licences to avoid £1,000 fine

Drug gang wanted to 'hit the jackpot' with £4.5m venture but got caught in EncroChat op

Is House of Gucci based on a true story and who did Maurizio Gucci date after Patrizia Reggiani?

The James Webb space telescope: in search of the secrets of the Milky Way

In pictures: See how Storm Arwen caused destruction across the North East

Give mushrooms a chance to foster a healthy garden, says RHS

The best places in Cardiff to go on a first date