The NASA astronauts are now racing towards the edge of the atmosphere aboard SpaceX's Crew Dragon Capsule. The Dragon has separated from the Falcon 9 rocket and is now flying towards the International Space Station (ISS). The launch blasted off from the Kennedy Space Center's historic Launch Complex 39A at 8.22pm BST (3.22pm ETD).

Shortly after launch, Falcon 9's first stage fell towards the Atlantic Ocean where it landed on a SpaceX drone ship.

The rocket's second stage then pushed the astronauts into a stable orbit before separating from the Dragon.

He said: "Appreciate all the hard work and thanks for the great ride to space." 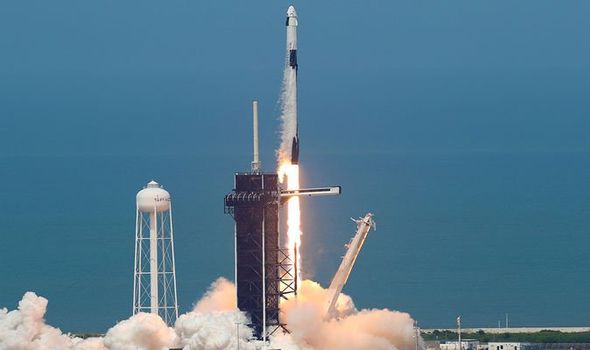 SpaceX launch: The Crew Dragon has launched and is on its way to the ISS (Image: NASA) 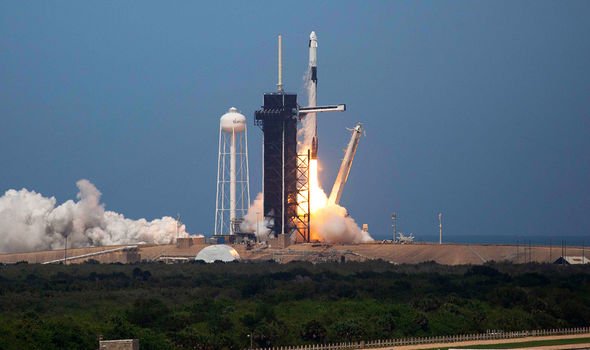 SpaceX launch: The Falcon 9 blasted off from the Kennedy Space Center (Image: GETTY)

According to NASA, some 10 million people tuned in to watch the launch online.

US President Donald Trump was also present at the Kennedy Space Center to watch the landmark event in person.

NASA administrator Jim Bridenstine said: "I think he's the only sitting President to watch American astronauts launch on a brand new rocket that has never launched before. That's a big risk, you know."

Astronauts Behnken and Hurley will spend about 19 hours in orbit before they reach the space station.

During this time, the astronauts will test Crew Dragon's systems in space.

Minutes before the rocket took off, Mr Hurley said: "It is absolutely our honour to be part of this huge effort to get the United States back in the launch business. We'll talk to you from orbit. Thank you."

The SpaceX CORE team also said: "Have an amazing flight and enjoy those views of our beautiful planet."

The Crew Dragon has been designed to ferry humans into orbit autonomously but the spacecraft can be taken over for manual control.

The launch marks the first flight of US astronauts from US soil since the end of the Space Shuttle programme in 2011. 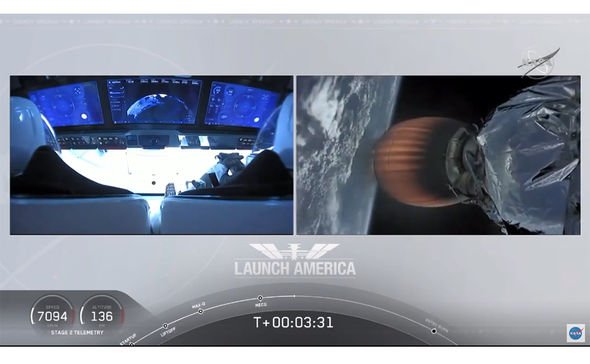 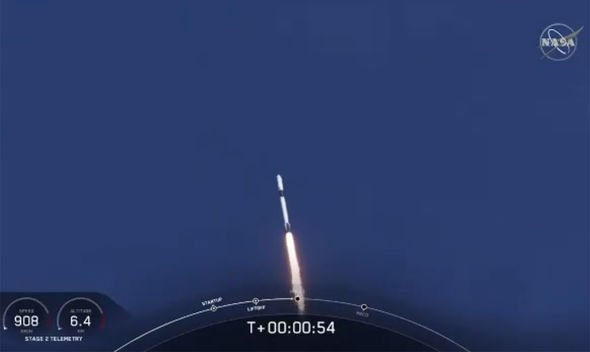 The US space agency has instead relied on its Russian partners to purchase seats on the Soyuz spacecraft for up to £73million ($90million) per seat.

NASA and SpaceX originally pencilled in the launch for Wednesday, May 27, but the mission was pushed back due to stormy weather.

After 19 hours in orbit, the Crew Dragon will dock with the ISS some 250 miles above the Earth.

Crew Dragon will remain docked to the ISS between a month and 120 days.

Ronaldo is the first in 59 years to score 25 goals for Juventus in Serie A in a single season
Sulscher on 5:2 with Bournemouth: I am happy with the energy of Manchester United and the goals scored. It was a match for the fans
Rashford on 5-2 with Bournemouth: it's Important to push on until the end of the season. Exciting time
⛔ This is the first League of Armenia was stopped because of dogovornjakah. Banned 5 clubs and 58 people (45-for life)
Greenwood scored 15 goals in a season and became the youngest Manchester United player with such a result in 37 years
Ronaldo has scored 29 (24+5) points in 26 Serie A matches this season
Dybala scored in 5 consecutive Serie A matches
Source https://www.express.co.uk/news/science/1289291/SpaceX-launch-Crew-Dragon-NASA-astronauts-ISS-launch?utm_source=feedburner&utm_medium=feed&utm_campaign=Feed%3A+daily-express-news-showbiz+%28Express+%3A%3A+News+%2F+Showbiz+Feed%29

Does the key to anti-ageing lie in our bones?

A new angle: introducing a contemporary edge to Victorian architecture

The Bank of England has many battles ahead. Inflation will not be one of them

Defensive duo the unheralded stars of Newcastle's return to form

MLB announces 31 out of 3,100 players test positive for coronavirus, which one GM says is ‘encouraging’

What are the opening hours for hairdressers and barbers now they’ve reopened?

'I can imagine it getting out of hand': Drinkers given taste of new reality as pubs reopen across England

Everything we know about coronavirus tracker on your phone