Scotland’s First Minister was met with criticism from furious Scots on Twitter after claiming the national team “played your hearts out.” She wrote: “Not to be, but thank you @ScotlandNT for taking us to our first men’s tournament in 23 years - you’ve played your hearts out and we’ve been proud to cheer you on.”

One Scottish football fan replied: “Sorry FM, but I, for one, am heartily sick and tired of being ‘courageous losers’.

“That was a must-win game for us and we didn't even come close.

“If Wales can do it, so should we. Excuses and platitudes just don't cut it, any more. 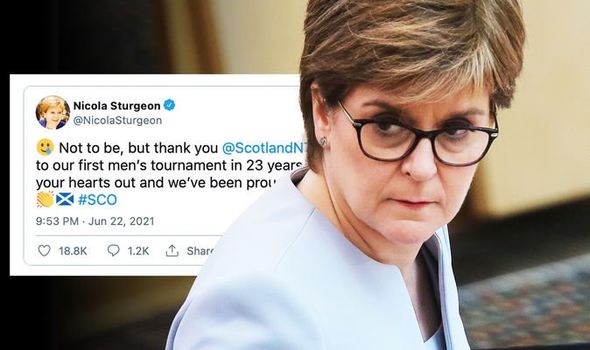 Another Scottish fan called on the First Minister to “congratulate your neighbours,” adding that she should “show a bit of class.”

A third Scottish commenter tweeted: “Once in a generation result tonight.

“Is it true you’ve called for a replay next week?”

One commenter even claimed the team had “shamed Scotland.”

Not to be, but thank you @ScotlandNT for taking us to our first men’s tournament in 23 years - you’ve played your hearts out and we’ve been proud to cheer you on #SCO

“It's a disgrace. I really think you need to condemn them Nicola, they've let you down big time.”

England and Scotland had drawn 0-0 in their second game of Group D at Wembley last Friday.

Despite the result, the Scots received widespread praise for their performance.