Footage of Scotland fans chanting brutal anti-English songs on the streets of London has emerged on social media since supporters began to flock to London for the Euro2020. Members of the so-called Tartan Army have been caught launching into "all hate the English" as they descended into the Capital to watch the historic Scotland vs England match at Wembley. GB News host Colin Brazier hit out at Scotland's supporters for their conduct, noting an inconsistency with the Scottish Government's stance on hate speech.

Mr Brazier said: "It's quite ironic given the Scottish government's stance on hate speech.

"One thing I did see a couple of days ago is footage of Scotland fans...I think they probably had a drink.

"Their chanting, I'll let people join the dots, was 'if you hate the English...'. I wouldn't want to be particularly censorious about that.

"It's people who are all together, had some drinks, are having fun but actually, not least in Scotland, where some of the hate speech legislation is pretty-tightly worded, you do wonder about looking at it in that context."

JUST IN: Prince Harry’s decision not to 'privately visit' Queen after Philip's death sparks US rage 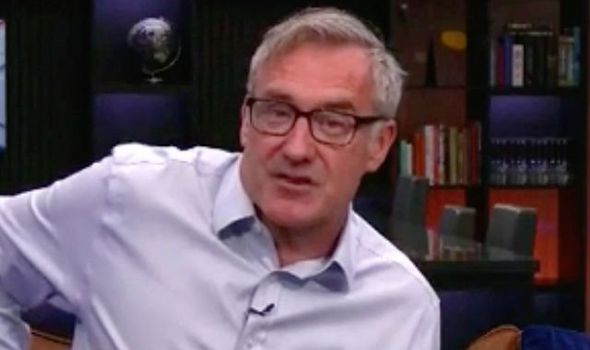 Scotland fans were also spotted outside of a cinema in busy Leicester Square on Thursday evening chanting "if you hate the f****** English, clap your hands".

The video was shared on Twitter and captioned: "Scottish nationalist diplomacy in action.

"In Leicester Square, whilst blocking the entrance to an open cinema that families use."

The new legislation introduced a new offense for "stirring up hatred."