He kept a selection of grooming utensils in his guest bathroom: nail scissors, implements for trimming nose hair, that sort of thing. He had a slightly shambolic air, and a listing gait, like a grad student impersonating a grownup, or as if his nanny had brushed his hair for him that morning. He would rock his head back when he talked and often spoke with his eyes closed, like someone communing with a higher power, which he probably was. His latest enthusiasms were always near the surface – to hear him speak about Rory Kinnear’s Hamlet, for example, was to make one want to go and see it all over again (he actually flew a group of his New York friends to London to see the production). He was equally expressive in his condemnation of work he didn’t care for. He was passionate, opinionated, uningratiating, sharp as a knife. 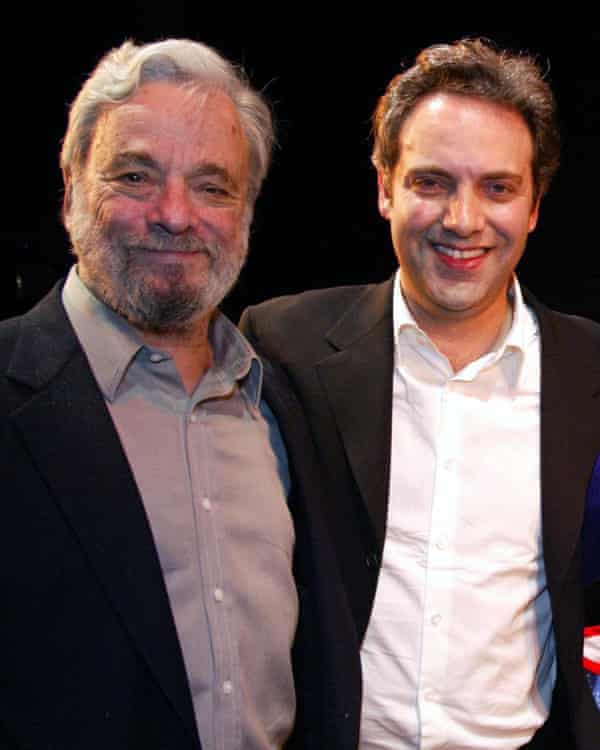 ‘He burst into tears and retired to the bathroom’ … Sondheim and Mendes in 2003, when Gypsy launched on Broadway. Photograph: Bruce Glikas/Getty Images

Until his later years, when he chose to spend more time in Connecticut, he was all New York. Steve saw everything: he taught me how to calculate exactly the amount of time it would take to walk to each individual theatre by judging how many blocks east to west (five minutes per block) and north to south (two minutes). For this particular wide-eyed Brit, Steve’s life on East 49th Street was a dream of New York in the 20th century. A beautiful brownstone, wood-panelled, with walls full of framed word games and puzzles. A grand piano looked out on a walled garden filled with vines and flowers.

Katharine Hepburn lived next door. When he first bought the house, he told a story of wandering out into the garden at dusk, turning back and seeing Hepburn standing in the lit window. From behind her, Spencer Tracy stepped out of the darkness, wrapped his arms around her and closed the curtains. Years later, after his musical Assassins had debuted off-Broadway, Hepburn approached him slowly and shakily to deliver her verdict over the garden wall. “You’re a curious man, Mr Sondheim,” she said. He was.

As he got older, his emotions were closer to the surface – ironic for someone who was sometimes accused of a lack of warmth in his work. I once had supper with him alone at 49th Street, during which he described the legendary production of The Tempest by Giorgio Strehler. When he spoke about the final moments, and of Prospero accepting that his powers were gone, he burst into tears and retired to the bathroom.

He was an amazing collaborator when he was on your side. Not so much fun when he wasn’t – I watched him storm out of a production of A Little Night Music in Chichester in utter fury. And I was working at the National Theatre when he first saw Stephen Pimlott’s (I thought) wonderful production of Sunday in the Park With George – and somehow the whole building knew his opinion of the second act by 10am the next morning. But when you were lucky enough to be on the receiving end of his admiration – an experience I had with both Assassins and Company at the Donmar – it was pretty exhilarating. He would cry (tears were never far away), pick out moments he loved, spot every detail, wax lyrical. 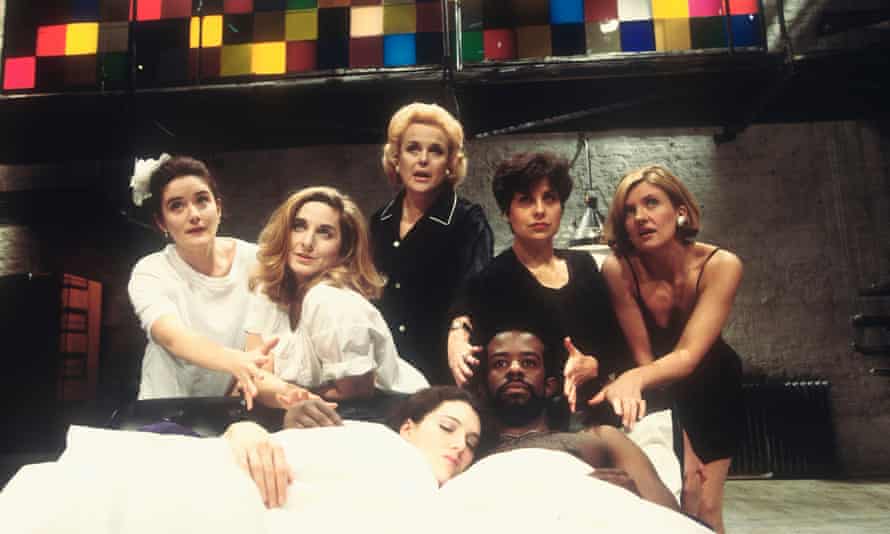 ‘He was an amazing collaborator’ … Company, written by Sondheim and directed by Mendes, at the Donmar Warehouse, London, in 1995. Photograph: Tristram Kenton/The Guardian

He was always utterly open to new interpretations of his work. Indeed he encouraged them – and in doing so, he broke the traditional mould of the American musical theatre, which tended to decree that the original production was the right and only one, so the work was then calcified for all eternity by draconian rules handed down by author’s estates and entertainment lawyers. He believed art – specifically theatre art – had to be a living, evolving thing, or it was nothing. In that regard he was the opposite of his sometime collaborator Arthur Laurents, with whom he co-wrote West Side Story and Gypsy. Laurents was literal, rigid, and lacked Steve’s confidence that the work could survive multiple interpretations. For example, see the astonishing array of productions of Sweeney Todd, as opposed to the single stale production of West Side Story that did the rounds for decades – a situation only remedied very recently after Laurents’ death by new versions from Ivo Van Hove and now Steven Spielberg.

Evidence of Steve’s boundless enthusiasm for new iterations of his work is alive and well in New York as I write this – John Doyle’s production of Assassins and Marianne Elliott’s of Company, both new-minted and as fresh as the day they were first performed.

His legacy is unquestioned – and best left to others to describe. Not only the shows, but also his two extraordinary books, written when he had mostly run out of juice for the stage. They are rare and significant pieces in that they describe creation from the inside. Filled with fabulous detail and insight, they are essential reading for anyone who wants to understand what theatre can be at the highest possible level, and for all those who now must try to stand on his shoulders. 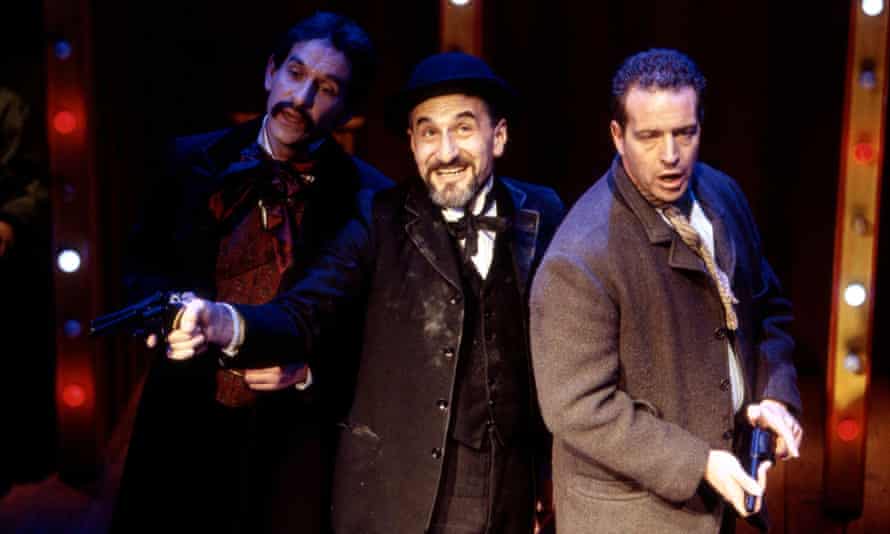 As for the shows themselves, the high spots remain personal: Sorry-Grateful from Company, Every Day a Little Death from A Little Night Music, Sunday from Sunday in the Park, and pretty much the whole of Sweeney Todd. There are several memories that are mine alone, however, something for which I remain absurdly lucky and stupidly grateful. Here’s one: we were working on the somewhat ill-fated New York Theatre Workshop production of his last produced musical, then called Wise Guys. Steve had brought in a new song to rehearsals that morning entitled A Little House for Mama. As our musical director Ted Sperling sat singing the song for the first time at the piano in his gentle falsetto, and the afternoon sun streamed into the dusty old rehearsal room, I found that tears were rolling down my face.

The song was so effortless, so simple, yet seemed to speak to the heart of those who struggled (as Steve did) with a lifelong need to heal a relationship that can never be healed. I looked over to him and he was crying too. “Mothers,” he said.

From sticky toffee to Marmite and pizza flavours, this year’s hot cross buns offerings are bonkers – we test them all

Watch Australian Open 2022 FREE: How to live stream all the tennis action from Melbourne without paying a penny

Who is Daniil Medvedev’s wife Daria and does US Open champion have any children with her?

Stunned customer told they owe £5,000 for one MONTH’S energy after switching to British Gas

Who is Matteo Berrettini’s girlfriend Ajla Tomljanovic and was she dating Nick Kyrgios?

Who is Rafael Nadal’s wife Xisca Perello, when did Australian Open 2022 ace marry her and do they have children?

Some of us still have questions about Covid vaccine top-ups. We asked the experts to set the record straight

Horoscope today, Friday January 28: Daily guide to what your star sign has in store for your zodiac dates

Two Post Offices a week have closed in the past two years, say Citizens Advice

ADVERTORIAL: 'Two doses does not give you enough protection' - booster essential say docs

DWP: 1.3million Brits 'missing out' on Universal Credit despite being eligible

Two Post Offices a week have closed in the UK in the past two years, say Citizens Advice