Jürgen Klopp had said that it wasn’t likely that Liverpool would score three at the Wanda Metropolitano, but in the end that is exactly what they had to do. With 15 minutes to go on a wild, fun and unexpectedly open night, Mo Salah stood on the penalty spot, handed the chance to deliver victory for Liverpool. Two-up inside 20 minutes, it was now 2-2, and nothing was certain any more. Except of course the Egyptian who stepped up and coolly slotted what would prove the winner.

Not that a Liverpool win seemed certain even then, Atlético almost immediately having a penalty of their own given to them and then taken away again, Luis Suárez left lamenting that he would not get the opportunity Salah had. Atlético were left lamenting a comeback that would prove incomplete, their hugely impressive attempt at resurrection ultimately cut short by a red card for Antoine Griezmann. Defeated, at the end there was exhaustion and applause from the home fans, plus whistles for the referee. There was also a huge roar from the visiting supporters.

It had been some night: five goals, two penalties and a lot of fun from start to finish. The clock had just ticked beyond seven minutes when Salah received the ball on the right, left four men behind him and gave Liverpool the lead. Turning inside beyond Yannick Carrasco and Thomas Lemar, past Koke on the edge of the area, he had hit he shot just as Griezmann got to him. The shot, as it tends to right now, found the net and up went the song. “Mo Salah! Mo Salah!”, it runs, although the replay suggested that it had actually been James Milner’s goal, reaching out a foot as the ball went past him and turning it into the net. This was deliberate, not just a deflection.

A moment later, Salah skipped away from Carrasco, the movement so smooth, and soon the lead was doubled when Trent Alexander-Arnold’s cross in was flicked out by Felipe to where Naby Keïta smashed in a volley that raced past Jan Oblak. The goalkeeper was left shaking his head. Liverpool’s dominance had seemed total – 80% of the ball, two goals up and faster to everything – but it did not last. Atlético got their first cross into the box on 18 minutes, which was not much but at least it was something, a sign of life, and it was met with a huge roar. It was also, as it turned out, the prelude to this game changing completely. The following minute, Griezmann’s clipped delivery almost found Carrasco at the far post. Alexander-Arnold stretched to avert the danger but from the corner, taken short, Lemar turned Keïta and pulled back for Koke, whose low shot was turned in by Griezmann.

The wait for the VAR was long, but not long enough to silence anyone here and the result did not stop them. Diego Simeone turned to the crowd and turned conductor. Koke too was frantically waving his arms, demanding a reaction. There was a resurrection, led by Lemar and João Félix, emerging as the star here, but driven by all of them. Alisson had to save from Griezmann, sent dashing clean through from the halfway line, Rodrigo de Paul’s pass spearing into space. The Frenchman then almost slipped in Félix, who then made the equaliser soon after. 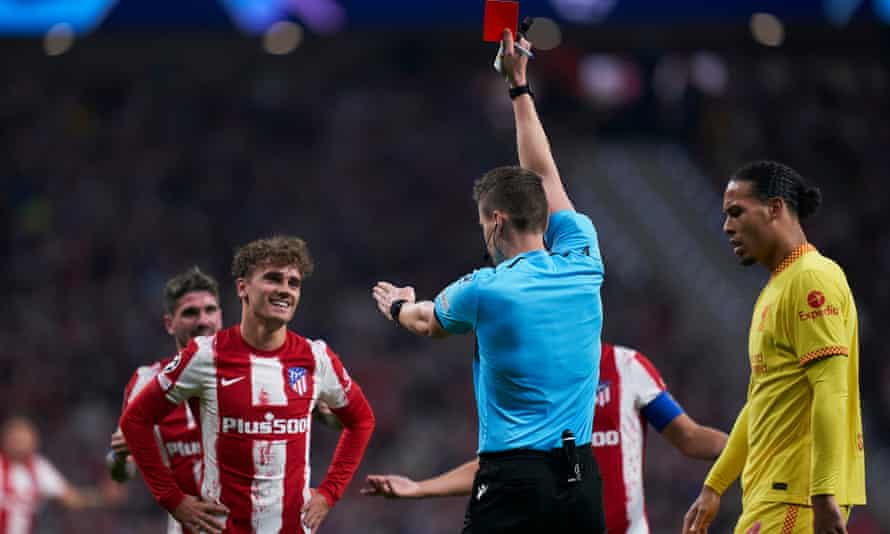 The goal came just as Simeone was preparing a substitution. Félix turned away from Keïta, smoothly pulling clear and slipped a ball through. As Virgil van Dijk turned to see it, he only saw Griezmann going past, controlling with his first touch and guiding into the corner. Simeone was pumping his fists, this place was going wild, and Renan Lodi was told to sit down again. Atlético were flying.

Twenty-two minutes had already provided 90 minutes’ worth of action and it was far from finished. Alisson could testify to that, making two more superb saves. Out to block Griezmann following Kieran Trippier’s crossfield pass, he also stuck out a strong arm to deny Lemar after Mario Hermoso’s perfectly-weighted pass. This was some game, impossible to keep up with, Oblak and Alisson both making saves within three minutes of the restart.

But then it changed again when Griezmann reached for a high ball, his studs hitting Roberto Firmino full in the face. Simone smiled, shaking his head. His side had been so impressive going at Liverpool. Asking them to continue to do so a man down felt like a big ask, and yet they appeared determined that this would not simply become an exercise in survival, waiting and resisting.

The onus to attack was with Liverpool, a neat exchange between Alex Oxlade-Chamberlain and Salah opening a chance and the direction of play increasingly pointing at Oblak. But Atletico’s threat wasn’t going away, an admirable willingness to get at their opponents and commit men forward despite the growing fatigue. Carrasco in particular was tireless, blazing a runway into the turf. There were fresh legs coming too, three men waiting on the touchline to be introduced – and all of them attacking players. Before Angel Correa, Renan Lodi and Marcos Llorente could get on, Liverpool had the lead. Alexander-Arnold hoisted a long, high ball into the Atlético area to no one in particular. Diego Jota went for it and Mario Hermoso went for him, cutting across the run and sending him to the floor. The challenge seemed unnecessary, foolish even, and the penalty clear. Salah scored and that three-man change became a four-man change, Luis Suárez joining the others.

Within a minute, the Uruguayan had the chance to put Atlético level too – or thought he had. José Giménez had fallen as he chased a ball alongside Jota and the referee pointed to the spot only to be called to the screen while Suárez was left there waiting. By the time Sibert came back he had seen enough to judge that Giménez had dived, an astonishing game denied and even more remarkable close.