On Wednesday 8 July, a plane with around 180 people on board left Madrid for Gran Canaria. This was not any old charter, as its “safe flight” passengers included Zurab Pololikashvili, secretary general of the UN’s World Tourism Organization; María Reyes Maroto, Spain’s minister for industry, trade, and tourism; a smattering of health workers being rewarded for their services during the Covid-19 crisis, travel PR and trade professionals, and journalists.

What made this flight safer than others? Although very much in the beta stage and yet to be made compulsory, it was a trial for the Digital Health Passport aka hi+card, which may become the blueprint for a global health passport. This is designed to ensure that travellers enter and leave destinations infection-free, bygiving them a PCR test in advance, with the results sent to their phone. While the measurement of blood pressure and temperature was pretty straightforward, the nasal swabbing felt vaguely disconcerting not unlike the new normality in fact.

On a plane where every passenger was wearing a mask, Iwas in an aisle seat and a health worker was in the window seat: there was an empty middle seat between us. In terms of social distancing, I couldn’t imagine feeling much safer.

It was much the same, at our first stop, Fuerteventura’s Morro Jable in the south of that island, which resembles an out-of-season UK resort, with bars, restaurants, and even Burger King closed. 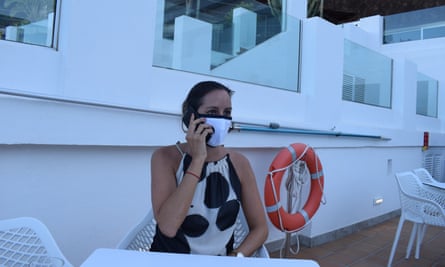 Masks are worn in all common spaces at the Lemon & Soul hotel. Photograph: Matthew Hirtes

Four-star Lemon & Soul Cactus Garden hotel had been open since 8 July and felt as eerily quiet as the unbroken 26km stretch of vanilla sand nearby. Here, and in other hotels, guests have to use the lifts individually unless they’re sharing a room, and follow a one-way route around the restaurant to avoid unnecessary contact with fellow visitors. There is hand sanitiser everywhere. Everything seems spotlessly clean.

At the pool bar I meet two of the hotel’s first returning British tourists: Coventry couple Trevor and Claire. They tell me they didn’t contemplate a staycation as they wanted “to rest and relax in better weather than the UK guarantees” after spending lockdown looking after elderly dependents. They say they have been further heartened by the warm welcome from the staff. “They were like: you’re English? No problem. We can get you a kettle.” This can-do attitude is exemplified by Noelia Delgado, the hotel’s cheery manager.

Her boss at the Meeting Point Hotels group, Bernardo Losada, tells me all about the group’s partnership with hygiene labs and international standards companiesto secure a POSI (Prevention of Spread of Infection) certification for each hotel, and how there’s a daily room check assurance tag for every new guest.” 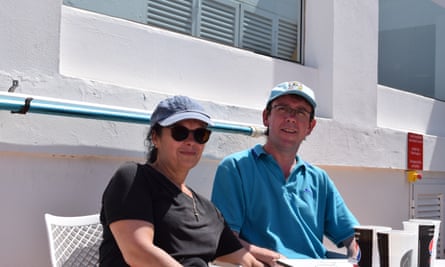 Stringency is a byword on the other side of the island too, in northerly Corralejo. Nightclubs might be thought of as doomed in these times, but Ian Downs, owner of the resort’s Reflex Disco, says groups inside are limited to eight people, and adding an outside terrace has improved the user experience. “Most businesses here are following guidelines and that is having a positive impact on people seeing Corralejo as a safe destination.”

The Canaries as a whole have positioned themselves as a “global laboratory for safe tourism”, the slogan Fortress Canaries reflecting the fact that this is one of Spain’s least-affected regions. There have been no coronavirus-related deaths on Fuerteventura, but lockdown was tough. Carlos Ortega, the civil servant charged with creating a new safety protocol for leisure companies, tells me: “Tourism brings €7m to the archipelago every single day, and 300,000 families on the islands depend on this industry as a source of income. The Canary Islands’ plan A is tourism.”

Under his protocol, Fuerteventura has had to cut capacity on popular pirate-ship excursions and at the many aloe vera farms, whose product is used in hand sanitiser. “We will reactivate tourism as soon as possible as our high season is winter,” Ortega says. 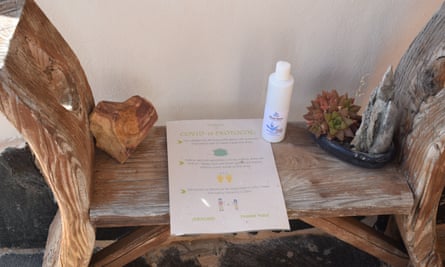 Another passenger on my “safe flight”, Suman Billa, UNWTO’s technical director, says the Canaries had contacted UNWTO for their expertise, and that lessons learned from their trial return to tourism could apply to other holiday regions. “The archipelago is a good fit as it’s a fairly controllable environment.”

He adds that this year is likely to see international tourist arrivals drop by anywhere between 60% and 80%. “The sector doesn’t have the luxury of waiting for a vaccine to be developed to restart. The key is to see how we can control the risk through robust hygiene and safety protocols.”

Both Ortega and Billa remain cautiously optimistic that tourists will return to the Canaries. The islands’ president, Ángel Victor Torres, agrees: “Between this month and next, 50% of hotels in the Canary Islands will be open, with some establishments enjoying occupancy rates of up to 80%.”

The Canaries have always offered sun, sand, and safety. A few years ago, their serene reputation recaptured consumers disinclined to trust more volatile destinations affected by the Arab Spring. The only mild discomfort is the mask; mandatory in all communal indoor and external areas where the safety distance of 1.5 metres is impossible to maintain or you are engaged in drinking or eating. But this just makes the great outdoors even more appealing, especially the golden miles of sandy beaches, which on Fuerteventura seem longer and wider than anywhere else in Europe.

Kapustka moved to Legia. The midfielder played 3 games for Leicester in 4 years and went on loan
Iker Casillas: Leaving Real Madrid was painful, but this is my home. Perez said: You should be here
Upamecano about PSG: This is the biggest club in France. We will give our all and try to win
Dembele was allowed to participate in the match with Bayern. He hasn't played since November
Porto signed Portuguese goalkeeper Ramos
Ferdinand on the Golden ball: If I were Levandovsky, I would create a petition. It's cruel
Bernardo Silva on the Champions League: Liverpool are out, Real Madrid are out, but it won't make our path any easier. Everything can happen
Source https://www.theguardian.com/travel/2020/jul/16/safe-flight-spotless-hotel-and-masks-everywhere-canaries-reopen-to-tourism

All the places which can reopen in England from Saturday

What it means as France and Netherlands go onto quarantine list

9 best umbrellas to save you from thunderstorms and beyond

Farmers to be paid for delivery of better animal welfare

Fines for repeatedly refusing to wear face covering could soar to £3,200

'Immeasurable harm': More than 1 million children in UK do not have British or Irish citizenship, figures show

Pre-treatment showers and temperature checks: How spas will look when they reopen after lockdown

Ofqual downgraded A Levels as teacher grades were 'implausibly high'

Spanish Grand Prix: When is it, what time does it start, session times and schedule