SADIQ Khan has reportedly warned Boris Johnson that London needs new coronavirus restrictions by Monday including a 10pm curfew for pubs to stop a surge in cases.

London's mayor is also preparing to urge people to work from home once again despite the government's push to get people back to work.

Labour mayor Mr Khan has been briefed by officials that the capital is facing an acceleration in coronavirus cases, reports The Huffington Post.

Health officials fear the virus is accelerating in the capital, with previous projections putting the city at "two weeks" behind other parts of Britain.

However, computer modelling now reportedly shows London is now just "two or three days behind" virus hotspots in the North.

"It’s clear that cases in London are only moving in one direction, we are now just days behind hotspots in the North West and North East. We can’t afford more delay," a source told HuffPost.

“Introducing new measures now will help slow the spread of the virus and potentially prevent the need for a fuller lockdown like we saw in March, which could seriously damage the economy once again."

Mr Khan and city officials are reportedly worried about the fast changing data of the virus picture in London.

He had previously warned it is "increasingly likely" the capital faced another coronavirus lockdown.

London R number has crept above 1 - with it estimated to be as high as 1.4 - with 20 of London's 32 boroughs seeing an increase in case rates over the past week.

However, no parts of London were included on the government's latest watchlist which highlights areas deemed at risk of coronavirus.

It comes as Britain saw its highest spike in cases for 19 weeks yesterday with 4,422 as the Prime Minister warned the UK faces an "inevitable" second wave.

The latest data available on the government website appears to show a decline in cases in capital, with a high of 450 new cases falling on September 7 falling to 163 on September 17.

In a statement, he said: "We will be considering some of the measures which have already been imposed in other parts of the UK.

"I am of the firm view that we should not wait, as happened six months ago, for this virus to again spiral out of control before taking action."

He added: "Please think very carefully about your actions - strictly follow social distancing rules, regularly wash your hands and wear a face covering to help reduce the spread of the virus."

And his warning came just 24 hour before a mob of anti-lockdown protesters and conspiracy theorists clashed with police in Trafalgar Square.

Plans have reportedly been drafted to co-ordinate the capital's response in the event "trigger points" - which is the case rate per 100,000 - keeps passing specific thresholds.

The official plans have been seen by the Evening Standard and are called  the “London Epidemic Response Escalation Framework” and it includes specific measures each time a “trigger point” is crossed.

Health chiefs are expected to hold a city-wide reassessment of how the killer bug is spreading as new data published later today will reportedly show the first trigger point will be met.

Infections are believed to be at the level where tough restrictions - including shutting pubs linked to outbreaks and a 10pm curfew is imposed - in at least a dozen London boroughs already.

The recent national rise in infections could see Britain face six months of on-off lockdowns, with the PM set to announce a two-week "circuit breaker" to tackle the ongoing pandemic.

Number 10 has been told by the government's Joint Biosecurity Centre, which monitors infections, that Britain is six weeks behind Spain, which recorded 239 deaths on Thursday.

It comes as Rishi Sunak warned Boris Johnson not to sacrifice Britain's economic recovery by going too far with new lockdown rules.

Mr Johnson said a second wave was “inevitable” yet insisted he will not impose the same strict lockdown as March. 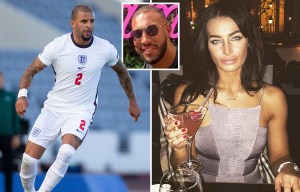 The PM said: "I don’t want to go into bigger lockdown measures at all, we want to keep schools open and it is fantastic the schools have gone back in the way they have.

He added; "We are seeing it in France, in Spain, across Europe – it has been absolutely, I’m afraid, inevitable we were going to see it in this country.”

Solskjaer about the Champions League: We beat one of the best teams in Europe. So why not aim for the final?
Ronaldo posted a video of himself running around in a Juve uniform and showed the goal celebration: Go, guys!
Carlo Ancelotti: Maradona is the best I've played against. I beat him like no other, he was unstoppable
Josep Bartomeu: my family and I were insulted, we received threats. This goes beyond all bounds
Professor of medicine Burioni: I Welcome Ronaldo to the ranks of virologists. In a match with optometrists, he will be very useful
Baresi became honorary Vice-President of Milan on the 23rd anniversary of the farewell match
Ronaldo called the PCR tests crap and then deleted the comment. I don't think I care about covid at all
Source https://www.thesun.co.uk/news/12717231/sadiq-khan-london-lockdown-coronavirus-monday/