Nascar driver Ryan Newman is awake and speaking with family and doctors a day after his horrific crash on the final lap of the Daytona 500.

Newman’s team, Roush Fenway Racing, released an update on their driver on Tuesday, the day after Newman’s car slammed into a wall at nearly 200mph, flipped several times and skidded to a halt in flames. 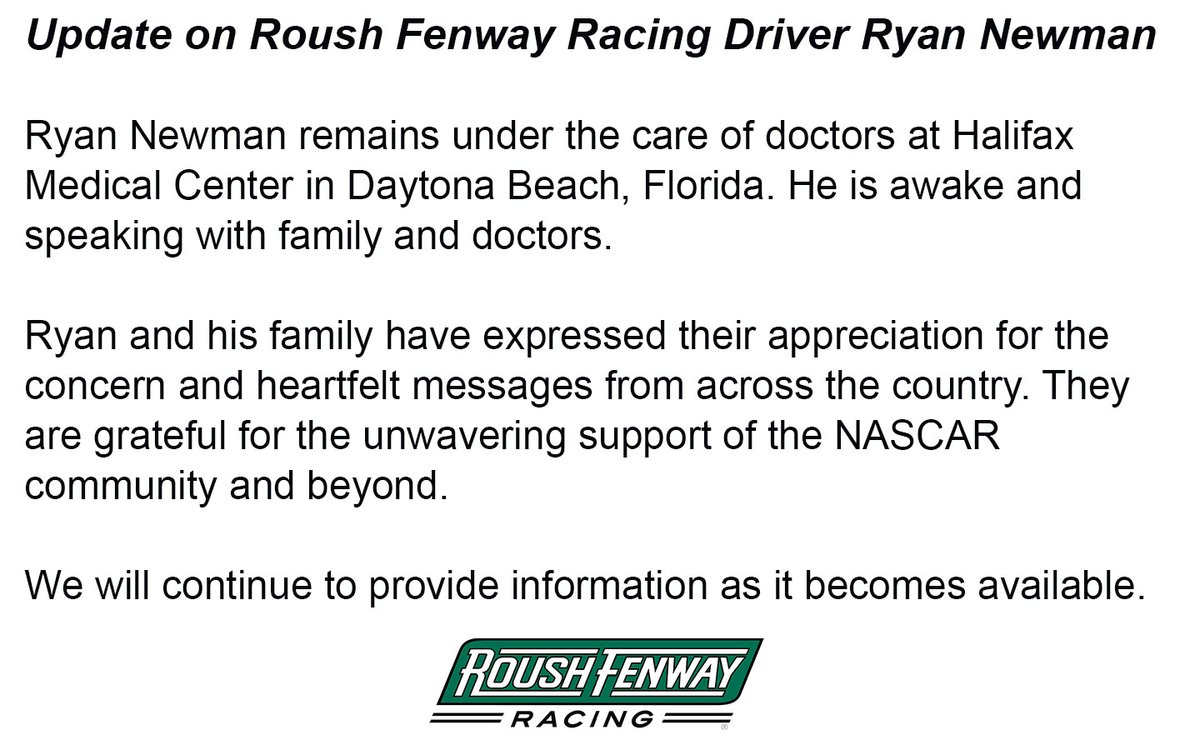 “Ryan Newman remains under the care of doctors at Halifax Medical Center in Daytona Beach, Florida,” read the statement. “He is awake and speaking with family and doctors. Ryan and his family have expressed their appreciation for the concern and heartfelt messages from across the country. They are grateful for the unwavering support of the Nascar community and beyond.”

Breaking: NASCAR driver Ryan Newman hospitalized after a fiery crash during the Daytona 500 race. His condition is unknown. pic.twitter.com/Nwg5B0pfOO

Spectators feared the worst on Monday night after the crash, and had to wait nearly two hours to learn that Newman’s injuries were not considered life-threatening. Newman turned hard into the wall after getting bumped from behind by Ryan Blaney a few hundred feet from the finish line. Newman’s No6 Ford then flipped onto its roof, and was hit on the driver’s side by another car at 190mph.

Newman’s car continued to skid upside down along the speedway and crossed the finish line in flames as safety crews hurried to extinguish the fire and cut Newman loose. It took about eight minutes for workers to roll his car rightside-up, and medical personnel used screens to block spectator views as Newman was placed in a waiting ambulance and taken to Halifax Medical Center.

There has not been a fatality in Nascar’s elite Cup Series since Dale Earnhardt died in a crash on the final lap of the 2001 Daytona 500. Nineteen years later, it’s clear that Earnhardt’s death probably saved Newman’s life. Nascar spent the last two decades working to improve safety regulations by installing energy-absorbing walls around tracks, mandating the use of head-and-neck restraints attached to helmets and continuing to make improvements to the cars.

Top 50 films according to IMDB - and where to watch them

Cheap ‘£399 iPhone’ to launch on April 15 – and will go on sale just one week later, insider claims

Prescriptions, energy bills and milk: These 11 things will cost Brits £158 more from today

'Everything is possible' - Sterling claimed open to Liverpool move

Turkmenistan bans use of word 'coronavirus' 'putting lives at risk'

Love Island's Dr. Alex George on why he wants people to catch coronavirus

'Zoom, House Party and FaceTime: How I ended up overwhelmed by a busier social life under lockdown'

Justin Timberlake defends Billie Eilish after she is slammed as 'overhyped'

Workers in new jobs blocked from getting emergency furlough payments