The Duke and Duchess of Sussex were officially moved from the royal section of waxworks to mix with Hollywood elites in a different area of the museum in May last year. Madame Tussauds said the move to “join their Holywood friends” reflected “their new status on the world stage as A-list favourites” after the pair stepped back from life as senior royals and moved to the United States in 2020.

The wax figures’ reunion with the royal family comes as the Duke and Duchess of Sussex prepare to return to the UK to take part in Her Majesty’s Platinum Jubilee celebrations next week.

The pair now stand alongside the Queen for a special display to mark the occasion.

They are joined by the figures of Prince Charles and Camilla, the Duchess of Cornwall, along with Prince William and Kate Middleton.

Tim Waters, general manager at Madame Tussauds London, said: “With Harry and Meghan returning to the UK to celebrate Her Majesty’s Platinum Jubilee it felt only right that our figures come together once more on our Royal Throne Room set to join in the family festivities.

“Our much-loved Royal Family figures have also been given an elegant new look ahead of the much-anticipated celebrations, decked out in their black-tie finery to mark this once in a lifetime occasion.”

All the royals have been given a black-tie makeover to befit the grand occasion.

The Duchess of Sussex dazzles in a stunning red-caped gown by the designer Safiyaa which she wore on one of her last engagements as a senior royal, for the Mountbatten Festival of Music at the Royal Albert Hall in March 2020. 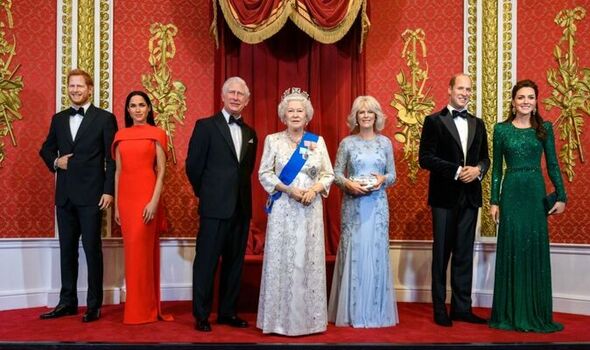 Harry and Meghan have rejoined the Royal Family in a special display to mark the Platinum Jubilee. (Image: Madame Tussauds) 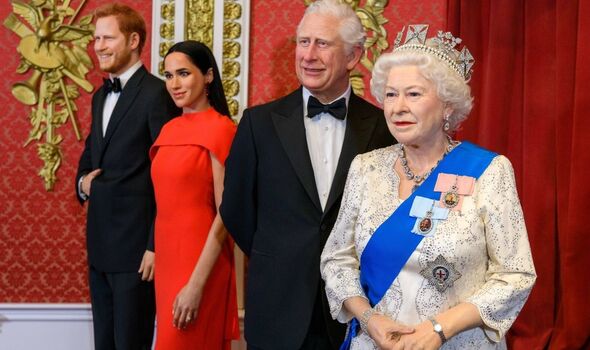 Meghan and Harry have been placed alongside the Queen and Prince Charles in a special display. (Image: Madame Tussauds)

The Duchess of Cambridge wears a sparkling emerald Jenny Packham gown worn by Kate during two separate royal functions; a state visit to Pakistan in 2019 and The Royal Variety Show in 2021.

Prince Harry, Prince William and the Prince of Wales have been dressed in matching tuxedos, while the Duchess of Cornwall is dressed in a powder blue ball gown.

The Queen’s figure is the 23rd of 24 of Her Majesty created by Madame Tussauds in London across her 70-year reign.

Her Majesty’s waxwork is dressed in a recreation of the white and silver lace dress worn in her official Diamond Jubilee portrait.

The gown is covered in 53,000 Swarovski elements complete with a blue silk sash and the Queen’s Garter Badge.

The figure also sports a replica of the diamond and pearl George IV State Diadem.

Mr Waters said: “At Madame Tussauds London we have a long history with The Royal Family, with British monarchs doing us the honour of sitting for our artists since 1809.

READ MORE: When will Meghan and Harry return to UK for Jubilee? 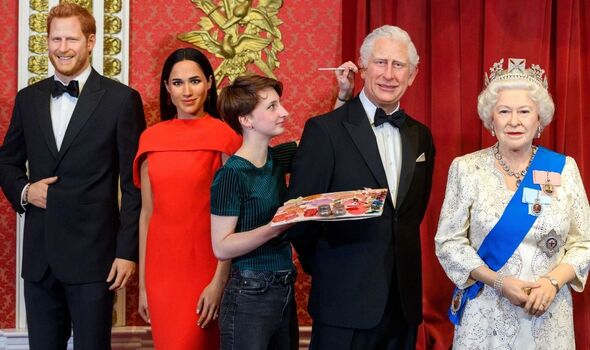 The Sussexes were moved from the royal family display in 2021 following their move to the US. (Image: Madame Tussauds) 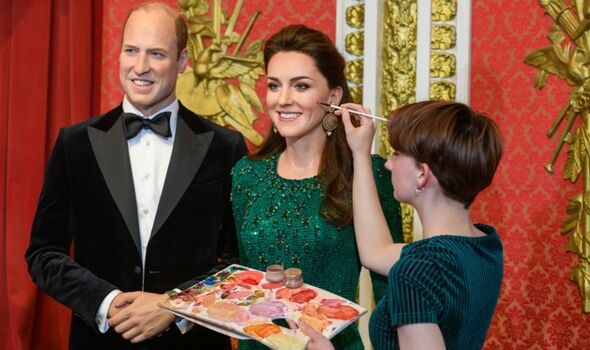 Prince William and Kate have been dressed in black tie to celebrate the grand occasion. (Image: Madame Tussauds)

“We’re so proud this has continued into the 20th century and we continue celebrating major milestones for Her Majesty The Queen.”

The unveiling of the display comes after Prince Harry and Meghan confirmed they will be visiting the UK for Her Majesty’s Platinum Jubilee celebrations next month.

The couple will be joined by their two children, three-year-old Archie and baby daughter Lilibet.

It will mark the first time the Sussexes have returned to the UK with their children since they stepped down as senior members of the royal family in 2020.

Confirming the news in a statement earlier this month, a spokesperson for the couple said: “Prince Harry and Meghan, the Duke and Duchess of Sussex, are excited and honoured to attend the Queen’s Platinum Jubilee celebrations this June with their children.”

Four days of celebrations are scheduled to honour the Queen as she becomes the first monarch in British history to reach the 70-year milestone.

The Sussexes have not yet confirmed their schedule for the weekend, where events will include a platinum jubilee concert, Trooping the Colour, a pageant and a Service of Thanksgiving. 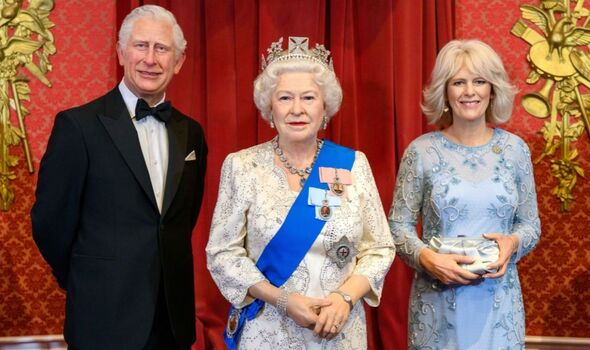 Prince Charles and the Duchess of Cornwall appear alongside the Queenl (Image: Madame Tussauds) 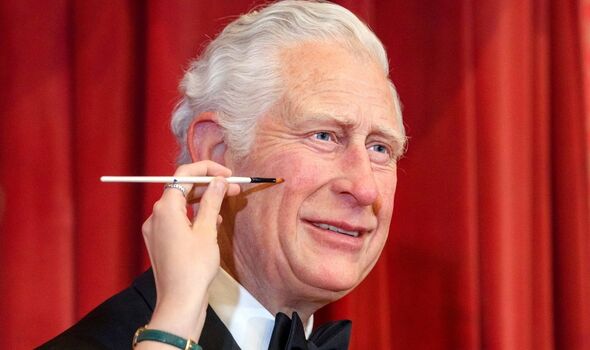 The royals have had a fresh coat of paint in honour of the occasion. (Image: Madame Tussauds)

It was revealed last month that the pair will not appear on the balcony of Buckingham Palace during the Trooping the Colour ceremony after the monarch limited the line-up to working members of the royal family only.

A spokesperson for Buckingham Palace said: “After careful consideration, the Queen has decided this year’s traditional Trooping the Colour balcony appearance on Thursday 2nd June will be limited to Her Majesty and those members of the royal family who are currently undertaking official public duties on behalf of the Queen.”

It is unclear whether Harry and Meghan will still attend the ceremony on Thursday 2 June which will kick off the festivities.

The museum announced it was moving the couple’s figures to the ‘Awards Party’ area in late 2020 after the pair stepped back from life as senior royals.

Their waxworks were revealed together at the museum in May 2018 ahead of the royal wedding.

Prince Harry’s figure was created in 2014, however, it was updated with a thicker beard ahead of his appearance alongside Meghan in 2018.

Madame Tussauds is also displaying a collection of gowns that have been worn by Her Majesty’s waxworks throughout her 70-year reign as part of its Platinum Jubilee celebrations.