Palace aides have reportedly called for Meghan and Harry to be stripped of their titles after the Duke appeared to criticise Prince Charles's parenting skills and upbringing and, as a consequence, the skills of the Queen and Prince Philip during the latest episode of the Armchair Expert podcast. One royal source told the Mail on Sunday: "They should put the titles into abeyance, so they still exist, but are not used, like they agreed to do with their HRHs.

The view of these palace aides appears to be backed by many Twitter users, with one saying: "According to the Mail, royal aides want Harry and Meghan to give up their titles. Great idea. Just take them away Ma’am."

Another said: "There titles need to go Harry is acting disgracefully.

"Who hasn't suffered hardship distress or loss in their lifetime.

"We aren't all pointing fingers we pick ourselves up get on with living best we can with the limited resources at our disposal. Harry has gone down in my estimation". 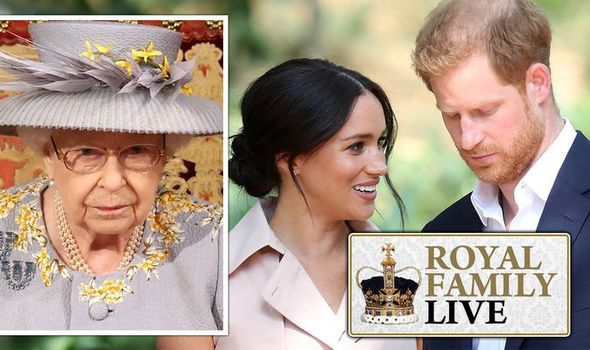 A third said: "Titles should be returned or stripped!

"Disrespecting your family is bad enough. Disrespecting the Royal Family is showing contempt for the nation."

And another added: "Strip them of their titles and the path to succession.

"Do it sooner rather than later."

Others, however, defended Meghan and Harry, with one saying: "Prince Harry should retain his title as it was granted hereditarily & so, is beyond whatever public sentiment du jour is."

They wrote: "Did you listen to the same podcast as I did? Royal Aides have no reverence to this subject."

And a third said titles are not important to the Duke and Duchess of Sussex's success, saying: "Prince Harry and Meghan should call their bluff and give up the boring title.

"Prince Harry and Meghan are an accomplished couple with or without their title".

A few royal commentators have also expressed their views on the matter.

Speaking about the possibility of Meghan and Harry giving back their titles, the Daily Mail Saturday Diary Editor, Richard Eden, tweeting: "I can't see them doing it voluntarily...."

Newsweek royal correspondent Jack Royston said: "Someone had told the MoS the palace is not happy about Prince Harry's podcast interview. Would be logistically difficult to do by force."

The Queen gave Harry and Meghan the titles of Duke and Duchess of Sussex as a wedding gift.

She alone can only issue a Letter Patent which would take away the Sussexes' His/Her Royal Highness (HRH) style they have already been asked not to use after Megxit.

However, it takes an Act of Parliament with Royal Assent to remove the peerage.

Follow the liveblog below for updates on the Royal Family