Key dates for the lawsuit against Prince Andrew have been set for next summer, at the same time as the Queen will be celebrating her Platinum Jubilee.

It is alleged that the Prince assaulted former sex trafficking victim Virginia Giuffre on three occasions when she was 17. Prince Andrew strenuously denies the allegations.

There is also Harry’s memoir, which is set to be released sometime in 2022.

If Harry and Megan’s Oprah interview is anything to go by, this memoir could condemn the Royal Family massively.

Commenting on the coming months for the monarch, royal expert Daniela Elser said: "There are two ferocious PR storms on the horizon.

"Key dates for the Prince Andrew case, as it wends its way through the American legal system, are now set down for May, June and July next year, smack bang right when his mother will be celebrating her Platinum Jubilee.

"Then there’s Harry’s memoir, which is set for release sometime in 2022. What the Sussexes’ Oprah revelations and Harry’s subsequent interviews have demonstrated is that the royal is yet to truly plum the depths of his reservoir of hurt and anger when it comes to his family. The possibility that his book will condemn the royal family and the monarchy even more than we have seen thus far looms large." 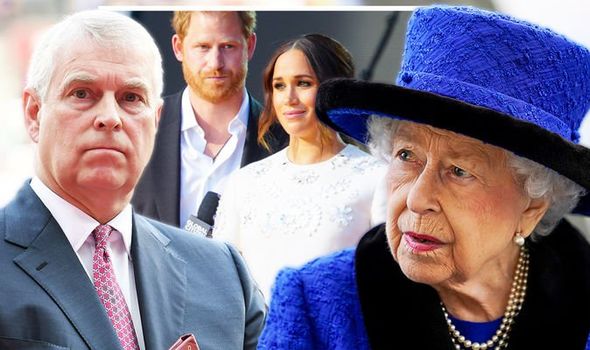 He claims this will protect the prince against allegations by an American woman that he sexually assaulted her on multiple occasions when she was 17.

The request was made in court papers in Manhattan federal court, where the US district judge Lewis A Kaplan is presiding over an August lawsuit filed on behalf of Virginia Giuffre.

Attorney Andrew Brettler, who is representing the prince, has called the lawsuit 'baseless' and is preparing written arguments to ask that the lawsuit be dismissed.