The Duchess of Sussex appeared alongside Harry for a recording of the podcast Teenage Therapy. The Californian-born former actress donned a T-shirt and facemask inscribed with symbols bound to ruffle a few feathers in Buckingham Palace. Meghan, 39, wore a grey T-shirt with big bold letters “RBG” emblazoned across the front.

This was in reference to the late Supreme Court Justice Ruth Bader Ginsburg, who was only the second female to serve on the highest US bench.

And in keeping with the RBG theme, Meghan wore a mask with the words “when there are nine” written on one side.

This phrase refers to Mrs Bader Ginsburg’s answer when she was asked how many women would be enough for the Supreme Court.

She said it would be when all nine seats were filled by women judges. 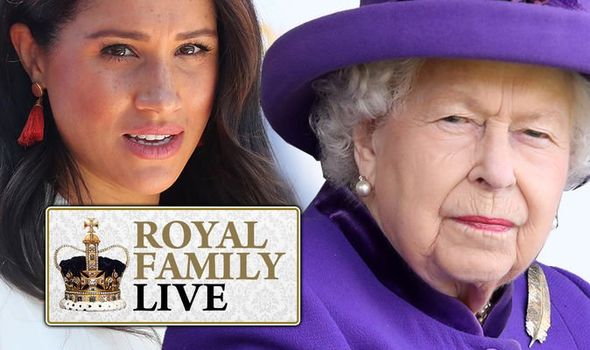 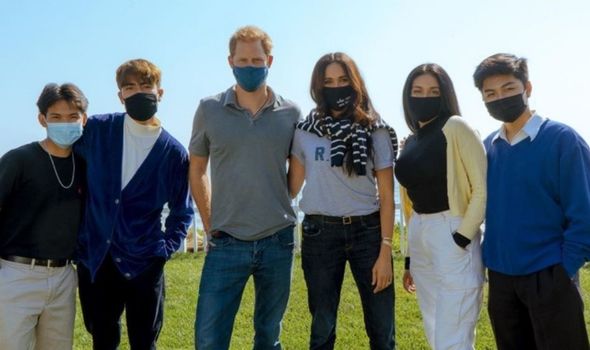 The Sussexes with fellow participants of the Teenager Therapy podcast in Montecito (Image: Instagram)

Members of the Royal Family are to remain strictly neutral on political issues – a rule which the Sussexes have shown little regard for since leaving the Firm.

Meghan’s use of clothing to make a bold political statement comes after the couple said change was needed in this year’s presidential election – but stopped short of supporting Democratic nominee Joe Biden.

As the pair ease into their new roles it remains to be seen if they will become even bolder in their ventures into politics by coming out in support of politicians or a certain party.

Meghan released a statement when Ms Bader Ginsburg died, saying she left behind an “incomparable and indelible legacy” and said she served as a “true inspiration to me since I was a girl”.