In modern-day football the medical team of Premier League and Championship clubs can be made up of a large number of staff, but back in the late 1980s and early 90s it was a completely different story. Tottenham’s medical staff consisted of Dr Brian Curtin, myself, my assistant, Dave Butler, and a couple of part-time physios to cover youth matches on a Saturday morning. It quickly became apparent that I somehow had to find more time to focus on Paul Gascoigne.

My only option was to get into work earlier, which meant getting up at 6am and after a quick slice of toast and cup of tea I would head to London. Paul would meet me at the training ground at 8am and we would get to work, allowing us to carry out valuable one-to-one rehab before the other players arrived.

One particular morning sticks in my mind. After our normal early-morning session, it was time for Paul to have a break and go for a coffee but because some of the other lads were enjoying a bit of banter, he decided to stick around in the treatment room. Paul being Paul, he was the centre of attention and fooling around, being a real pain, so I abruptly told him: “Piss off out of the treatment room.” He looked shocked and upset as I rarely lost my temper. It had the desired effect because he stormed towards the door and slammed it as he left.

About half an hour later there was a knock at the door. I opened it and to my astonishment Paul was standing there with a white rose in his mouth. “Sorry,” he said, and held out his hand. “Are we still mates?” Trying not to laugh, I said: “Of course we are and always will be as long as you behave yourself.”

That was the only cross word we had during that year. There was a mutual respect between us; he knew I was going to do everything in my power to get him back playing at the highest level and I knew he had the drive to come back stronger, fitter and better than before.

Paul came in one morning for his usual early session and said: ‘John, how do you feel about a working holiday to Portugal?’ He explained that he had been speaking to one of the tabloid papers and they were prepared to fund the trip in return for a few exclusive photos. It was a tempting offer and after the emotion of the past few weeks I thought it would be a good opportunity for us to recharge our batteries while still working hard. After consulting with the club and surgeon, it was agreed we would fly to Portugal for a 10-day break and continue our strict rehab programme. 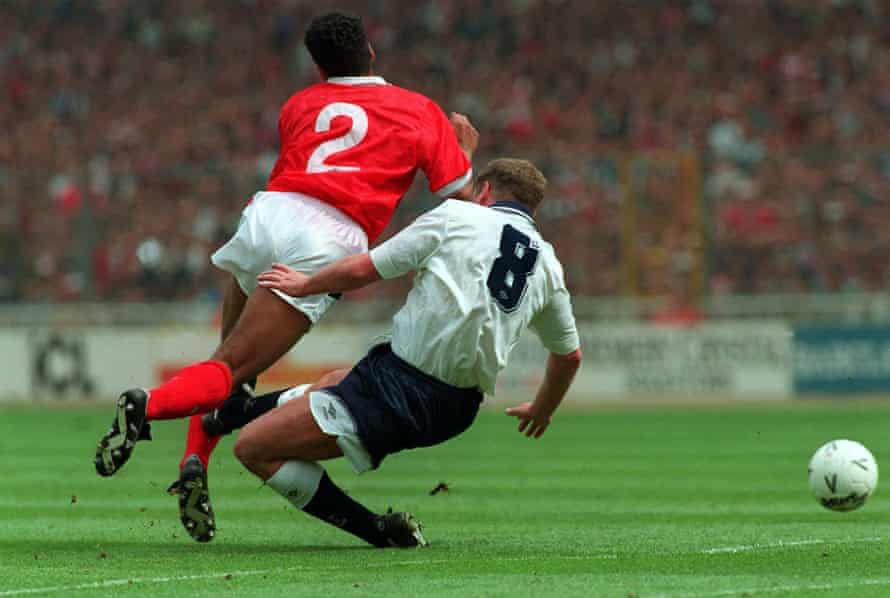 The day of the trip arrived but as soon as we reached the airport I realised it wasn’t just going to be myself and Paul. There was a large party of us flying out. The group consisted of myself, Paul, his dad, John, who was good company for me, his ball-juggling brother-in-law also called John, his sidekick Jimmy “Five Bellies” Gardner and his friend Terry Bailey, who was then married to Linda Lusardi. To complete the group was the Chrysalis Films crew, who had been given permission to document Paul’s rehab from start to finish. They were always respectful when on duty and after a while I forgot that the cameras were there. As our group walked through the airport we were met by loud cheers from the public as they spotted Gazza.

This trip laid the foundation for Paul’s rehab. The atmosphere was brilliant within the group and we worked extremely hard throughout our morning and afternoon sessions. These sessions now included a full range of muscle and joint exercises and I was also able to add a small amount of resistance with the help of a couple of diving belts I purchased early one morning on the quayside. In between our sessions we enjoyed a lot of fun and laughter. One of the highlights was a game of table tennis with the Danish actress Brigitte Nielsen, who was staying at the same hotel.

A few days into our trip we were enjoying an evening meal when all of a sudden Gazza said to us all: “Who fancies an afternoon of shark fishing? I have arranged a boat; the skipper will take us about 14 miles out to sea where it will be teeming with sharks.” Paul is such an avid fisherman and because his progress was excellent I thought it would be a great idea.

Paul was in his element. I sometimes felt that despite all the hype and razzmatazz that followed him, he was only truly happy when he was away from it all and fishing by himself.

Most of us had a turn but with varying degrees of success; we managed to catch a few fish but there was still no sign of the elusive shark. Finally, one of the rods showed a large bite. Whatever was on the end of the line wasn’t giving up without a fight and after an almighty battle Paul managed to bring the catch close to our boat.

As we cautiously peered over the edge it was pleasing to see a baby shark in the water. The skipper carefully brought it on to deck and Paul said: “Give it to Johnny.” Thanks Gazza, I thought, as I was handed the shark. The skipper said: “Whatever you do, don’t drop it as it will bite somebody’s leg off.” Imagine the headline: “Paul Gascoigne gets his good leg bitten off by his physio”. After holding the shark for a short while and chasing Gazza with it I put the thrashing beast over the side and back into the sea where it belonged. 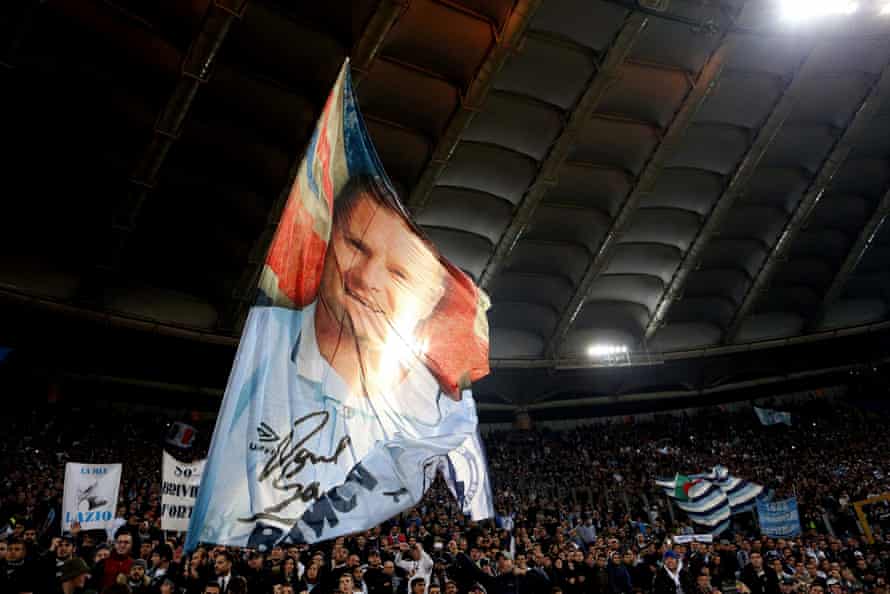 Paul Gascoigne is remembered by Lazio fans before a game against Tottenham in 2012. Photograph: Carl Recine/Action Images

Part of the transfer agreement between Spurs and Lazio was for Paul to make an occasional trip to Rome. These allowed the fanatical Lazio supporters to see him and also the medical staff to check on his progress.

On the first visit it was agreed for Paul’s close friend Glenn Roeder to accompany him. Glenn had a distinguished playing career as a central defender for Queens Park Rangers, Newcastle and Watford and went on to manage in the Premier League with West Ham, Newcastle and Norwich.

I believe it was when Glenn was a player at Newcastle in the mid-1980s that he first formed a close bond with Paul, so he was the perfect person to accompany him to Rome as he was older and a calming influence.

When they returned, Paul told me that the trip was a success, the Lazio fans adored him and he couldn’t wait to return and play in front of them. He has always been driven and hard-working but I believe this trip gave him an extra spark to get back to full fitness.

This is an edited extract from The Limping Physio by John Sheridan, published by Pitch and available now for £19.99

Why you never want to see SSSS on your boarding pass

Can you get chickenpox twice?

Get £20 in FREE BETS when you stake £20 on any Premier League football tonight with FanTeam, inc Man Utd vs Arsenal